MercadoLibre, Inc. (NASDAQ:MELI) is the e-commerce leader in the burgeoning market of Latin America. Investors may be surprised to learn that they could have nearly doubled their money investing in the company over the last 12 months. This doesn't come as a surprise to longtime followers of the company, who have been expecting this for some time. Let's look at one key factor that has helped push the stock to record highs, and will likely continue to drive future growth.

When MercadoLibre launched its operation in Latin America in 1999, it was initially modeled after eBay (NASDAQ:EBAY), in a region where e-commerce competition was sparse. eBay was a competitor there for a short time, but after failing to gain any significant traction in the region, eBay joined forces with MercadoLibre in 2001 in a strategic partnership that acquired 19% of the company. As part of the venture, eBay sought to mentor the fledgling business and agreed to "share best practices with the company." Following eBay's lead, MercadoLibre began its MercadoPago payment service similar to PayPal (NASDAQ:PYPL). In a region where it's estimated that 50% of adults don't have a bank account or credit card, this became a key to its future growth. 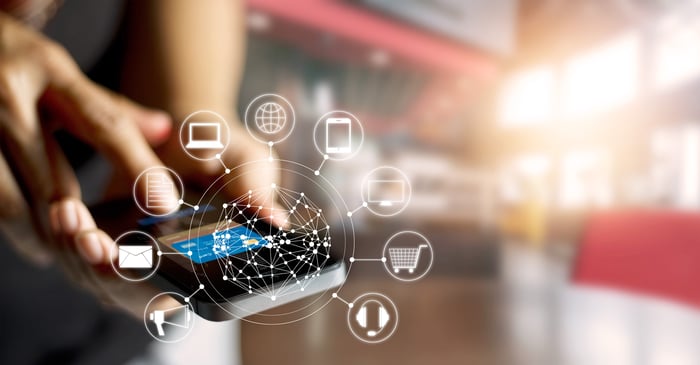 While growth has continued across all areas of the company, the area of payments has dominated. In a recent conference call, MercadoLibre noted that total payment transactions exceeded its marketplace business for the first time, and highlighted the opportunity in payments (emphasis added):

Our payments business also performed well all throughout, processing over $2 billion dollars of Total Payment Volume for the first time in our history during a single quarter. In line with that, as mentioned earlier, our payment volume also surpassed for the first time ever core Marketplace's Gross Merchandise Volume. These are two very significant milestones for us, as they not only present material evidence that our payments strategy is the right one, but also that we are scratching the surface when it comes to the growth opportunities present in the payments spectrum.

MercadoPago became so successful in the markets it serves that MercadoLibre began offering the payment service off-platform -- to merchants not doing business on its website. Payments growth has accelerated as a result, producing a record $2.4 billion in payment volume and 67% year-over-year growth in payment transactions in its most recent quarter. During the earnings conference call, it had this to say: Many investors would welcome the opportunity to go back in time and put their money in a company early in its growth story. MercadoLibre and its payment service represents such an opportunity, much as eBay and PayPal did more than a decade ago. Its potential for additional growth may be bolstered by underpenetration in the payments market. MercadoLibre offers a unique alternative and has the home-field advantage, as evidenced by the rapid adoption of its payments service by off-platform merchants. This will likely provide tailwinds for the company for years to come.