For the past several years, Zoe's Kitchen (ZOES) has experienced an impressive growth spurt, leading many investors to believe the Mediterranean fast-casual chain was well on its way to becoming a national brand.

And while that may still be the case, 2016 was not a good year for the company, with growth in its key metrics slowing across the board. Using the last five years of data, here's a snapshot of how Zoe's rough year looked in the grander scheme of things.

Comparable-sales growth is grinding to a halt

While Zoe's comparable-restaurant sales growth has slowed from the stellar 10%-plus rates the company enjoyed throughout 2012, it generally stayed in a very healthy range between 4% and 8% from 2013 until the first half of 2016. 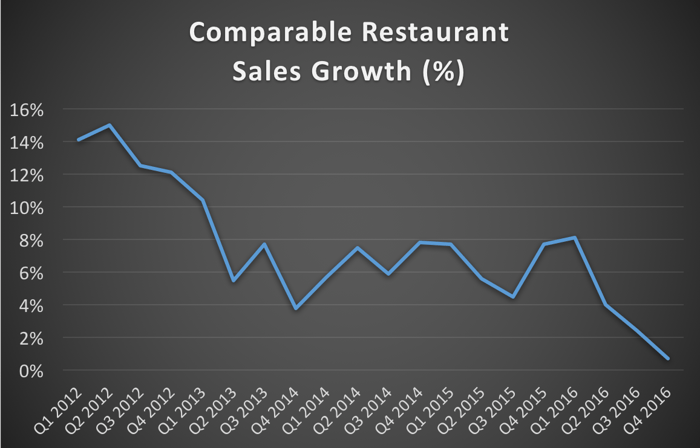 But starting in the third quarter last year, the company fell victim to the so-called "restaurant recession," with comps growth dropping to its lowest levels since Zoe's became a public company. Comps clocked in at 2.4% in Q3 and just 0.7% in Q4 -- and in both cases, price increases compensated for a decrease in overall traffic, an unsustainable formula.

While falling guest traffic is certainly an industrywide issue right now, the trend for Zoe's comps doesn't look promising. The company is guiding for 1% to 2% comps growth for 2017, which would be a post-Great-Recession low, but it also thinks it can goose those numbers in the second half of the year as it rolls out new menu items and marketing initiatives.

400 stores by 2020 is doable, but only if store growth stops slowing

From a much smaller base than today, Zoe's grew its restaurant count by 36% in 2013. As this store count grows increasingly larger, the pace of expansion has slowed. In 2015, the company grew its number of restaurants by 26%, while in 2016, the company added 38 new stores, good for 23% annual growth. 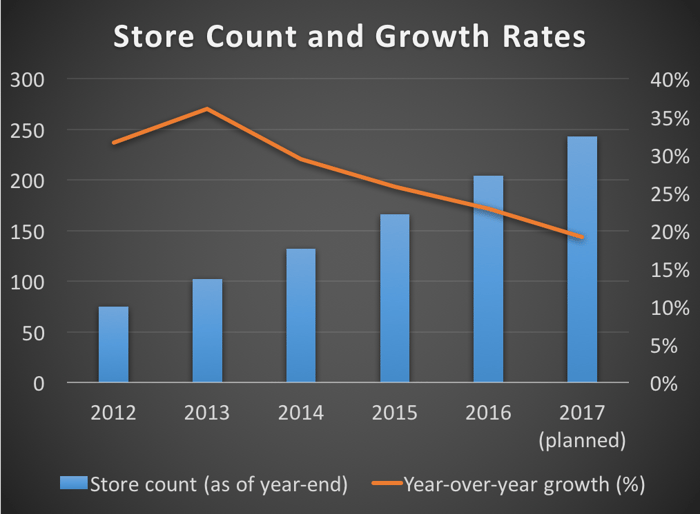 Any further deceleration would be a threat to Zoe's ambitious plans to reach to the 400-store mark by the end of 2020. With 204 total locations today, Zoe's needs to open an average of 49 stores per year for the next four years to meet its goal. This equates to a compound annual growth rate of 18.3%, which, judging from the chart above, still looks achievable -- but perhaps just barely.

For 2017, the company has stated they plan to open 38 to 40 restaurants. At the midpoint, this would represent around 19% annual growth. But it means the company would then need to open an average of 52 stores a year from 2018 through 2020 to stay on track. Additionally, the company is not able to fund new store growth with cash from operations, with management stating on the conference call that it will be using debt to finance its expansion this year.

Earnings growth is heading in the wrong direction, too

Zoe's has only been profitable for the past two fiscal years, so charting multiyear growth rates for net income isn't possible at the moment. Looking instead at adjusted earnings before interest, taxes, depreciation, and amortization (EBITDA) shows this measure of top-line earnings slowing dramatically last year. While adjusted EBITDA grew at rates north of 40% in 2014 and 2015, falling restaurant contribution margins and slowing comps growth helped drive adjusted EBITDA growth lower in 2016, to just 12.53%. 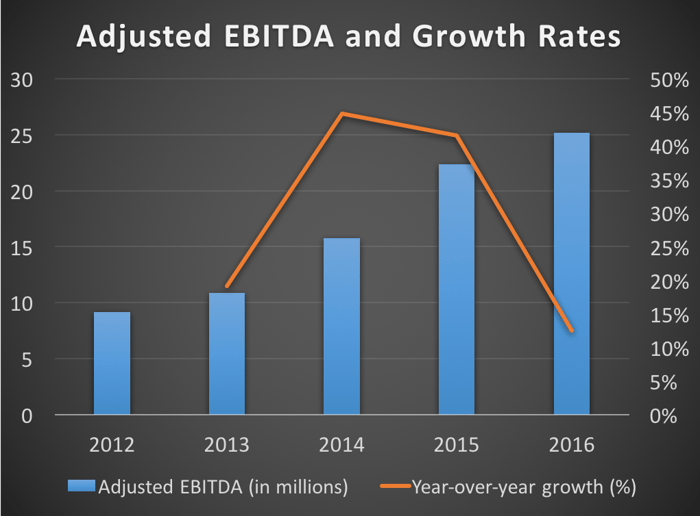 EBITDA will likely continue to be pressured into next year, with Zoe's guiding for restaurant contribution margins to fall again in 2017. However, longer-term, as Zoe's newer stores begin to mature, the company says its margins should steadily improve (units more than three years old average 23% margins, vs. Zoe's targets for new stores of 10% to 12% margins). Along with its rising store count, Zoe's believes this one-two punch will help it achieve long-term 20%-plus annual EBITDA growth.

Up until 2016, Zoe's was enjoying the kind of growth that was the envy of the industry. With that momentum slowing substantially last year, the company finds itself with a lot to prove as it continues to march forward with its expansion plans.