Royal Dutch Shell plc (NYSE:RDS.B) has a fat yield of around 6.7%. But its long-term debt load has increased by more than 50% in the past year and by nearly 120% since the end of 2014. The oil and natural gas giant is now selling assets to get its stressed balance sheet under control. Although I'm fairly confident it will be able to save its dividend, investors should always question their assumptions. Here's my attempt to do just that.

Instead of thinking only about what could go right with an investment, you should question your assumptions and look at what could go wrong. It's an idea I stole from Bruce Berkowitz of Fairholme Fund (NASDAQMUTFUND:FAIRX). Three big warnings signs for Berkowitz are companies with too much debt, burn cash, and take on big risks. Shell is guilty of all three. 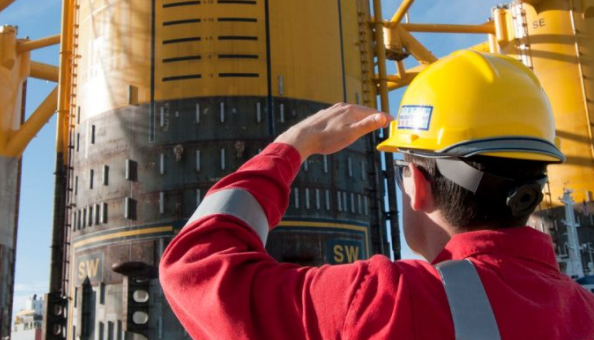 The big risk was the company's over $50 billion purchase of natural gas-focused BG Group last year while revenue and earnings were under pressure from low oil and gas prices. This move will increase Shell's scale in a business in which it already has an industry-leading position. Basically, it levered up to double down on natural gas, with a particular focus on liquified natural gas -- which is how the fuel gets transported when pipelines aren't an option.

What could go wrong? Integration problems, synergies that don't pan out as planned, and the inherent bet on natural gas prices rising. The first two would put pressure on the company's bottom line and the last would hurt the top and bottom lines. Indeed, despite persistently low natural gas prices lately, Shell is making a big call on prices going up in the future. And it isn't just the U.S. market that's seen downward pressure on natural gas prices. European gas prices declined over 20% in 2016 and pricing in Asia fell along with oil prices since gas pricing is pegged to oil prices in that region.

And there's a bigger picture risk to consider, as well. Although natural gas tends to be regional in nature today, increasing U.S. production mixed with increasing U.S. export capacity could disrupt that dynamic. Indeed, U.S. onshore oil drilling has already proven that it can ramp up and down quickly enough to impact oil prices the world over. It's hardly a stretch to think the same could be true of natural gas in the not too distant future.

These are all hard-to-quantify risks, but you should have them in the back of your mind just the same. 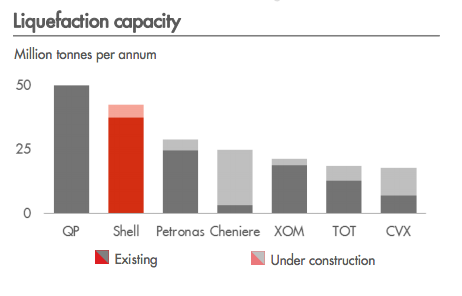 Burning cash and excessive debt are more quantifiable. For example, like many other energy giants, Shell has been sending out more cash than it has brought in to maintain its dividend and capital spending. The 50% increase in the company's debt load after the BG deal hasn't helped the situation, either.

To put some numbers on that, in the fourth quarter, Shell generated roughly $9 billion from operating activities, but that included a billion-dollar gain from asset sales. It spent roughly $8 billion on the dividend and its much-reduced capital spending program. Shell's interest expense more than doubling year over year in the fourth quarter to around $1.1 billion clearly didn't help.

The game plan is to sell roughly $30 billion worth of assets, with some early success in that effort. But if the company finds it can't sell assets as fast as it wants, doesn't get the prices it hopes, or deals fall through, interest expense will remain elevated and continue to put pressure on the cash flow Shell needs to pay the dividend. And this is going to be a piecemeal effort, with the deals so far in the single-digit-billions range on the high end.

Using back of the envelope math, taking the fourth quarter interest costs as a run rate, it looks like Shell's interest expense is roughly 5.4%. So the around $5 billion worth of asset sales currently completed will save the company about $270 million in interest annually. That's good news and will go a long way to reassuring investors that the dividend is safe. But it's nowhere near enough since dividends (which alone cost the company $9.7 billion in 2016) and capital spending are eating up basically all of the company's operating cash flow.

There are two problems here. First, since the company is still burning through cash, all of the money it raises from asset sales may not go toward debt repayment. It may be needed to fund the dividend and capital expenditures. That would further delay the balance sheet fix and keep pressure on the dividend. In fact, the dividend is already partly paid in stock so Shell can preserve cash. 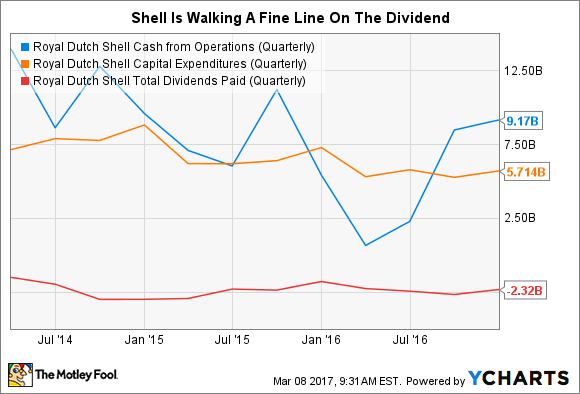 Second, there aren't many other places to find cash. Like its peers, Shell has already materially trimmed its capital spending (this line item on the cash flow statement is 45% lower than it was in 2014). Cut too deep and maintaining current production levels could become an issue let alone production growth. And there's likely limited upside from cost cutting, since that's been an area of focus throughout the energy industry since mid-2014. Higher energy prices could save the day, but the U.S. energy renaissance suggests that it's probably best to assume current prices are here to stay. In other words, trimming debt is the big lever.

Close but not there yet

The company roughly covered its dividend and capital spending in the fourth quarter with cash from its operations. So there's reason to be hopeful, as I am, that Shell can keep supporting the dividend even in the current energy price environment. But it really needs to start trimming debt and reducing its interest costs if it wants to save the dividend, or increase it over the longer term. The asset sales announced so far are little more than a down payment that provides some additional wiggle room.

In the end, if Shell can't make good on its asset disposition pledge in a timely fashion, the dividend could end up the ultimate casualty. I don't expect that, but you should be aware of the risk.