While the P/E ratio is the most popular valuation metric, we think the price-to-sales, debt-to-equity, and enterprise value-to-EBITDA ratios are even more important. 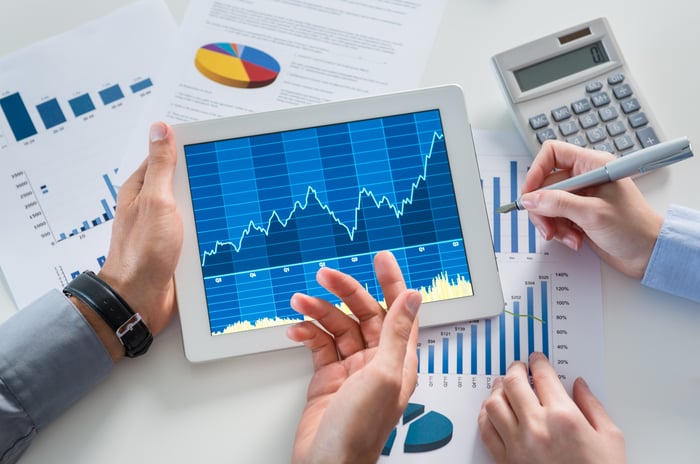 Consider Costco (COST 1.92%), which generates between 1.5% and 2% of sales in earnings each year thanks to membership fees that tend to flow at the same pace despite swings in the broader retailing industry. Investors have decided to pay between 25 and 30 times that profit to own Costco's business, marking a solid premium over its less consistent retailing peers.

But in situations where recent earnings are volatile or unreliable, I'm a fan of price-to-sales. There are many ways a company can swing profit over the short term, but revenue is more difficult to manipulate. Consumer-goods giant Procter & Gamble (PG 1.78%), for example, recently saw its P/E ratio collapse to below 17 -- a 40% decline in the past year. That's mostly thanks to a one-time, $9 billion divestment of a big collection of its beauty brands. On a price-to-sales basis, P&G has become more expensive lately, with investors paying 3.9 times revenue today, compared with 3.5 times revenue a year ago.

And while that's a great metric that investors should acquaint themselves with, this example is going to go a step further and explain why you truly need to understand the figures you put into the equation. Here's a great example of arguably the world's most misunderstood debt figure, which unfairly inflates Ford Motor Company's (F -3.20%) debt-to-equity ratio when compared with its competitors.

Take pipeline giant Kinder Morgan (KMI -0.10%), which at first glance appears to trade at a nosebleed valuation of 86 times earnings. However, that's because the company recorded several impairment charges and other items last year, which pushed its net income down to $522 million. That's a far cry from the company's underlying earnings of $7.2 billion. And that's why I prefer to use the enterprise value-to-EBITDA (EV/EBITDA) ratio, because it tells the whole story. Not only does it measure a company's underlying cash flow instead of its earnings, but it also compares that cash flow to a company's enterprise value, which takes debt into account. When we use this metric on Kinder Morgan, its valuation ratio falls to 15, which is right in line with other large energy infrastructure companies.