After reporting encouraging data from a phase 3 clinical trial, shares of Nektar Therapeutics (NASDAQ:NKTR) rose by 33% as of 11:22 a.m. EDT on Monday. 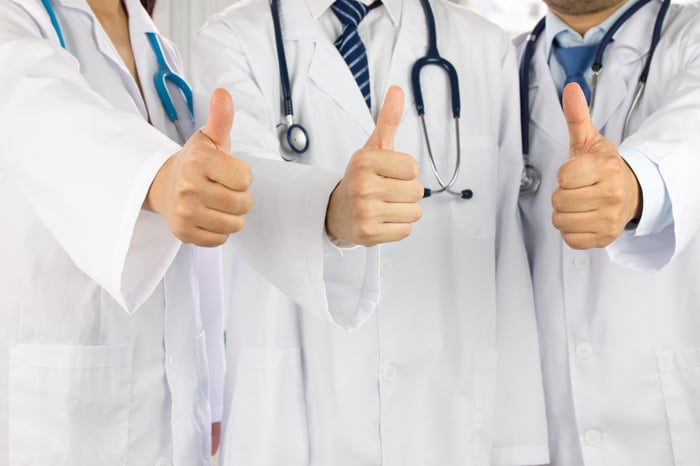 Nektar announced the results of its phase 3 SUMMIT-07 trial. This study was testing its compound NKTR-181 as a hopeful treatment for patients with moderate to severe chronic lower back pain. Importantly, NKTR-181 has been designed to offer pain relief without delivering high levels of euphoria that can often lead to abuse and addiction.

The SUMMIT-07 study compared NKTR-181 tablets to a placebo in more than 600 patients who were new to opioid therapy. The trial started with all patients being titrated with NKTR-181 until their pain was deemed to be under control. The data from this period showed that NKTR-181 dropped the average patient's pain score from 6.73 to 2.32 once they were titrated. Next, all patients were blinded and either continued taking NKTR-181 or were given a placebo. At the end of this 12-week blinded trial period, placebo pain scores rose by 1.46, while NKTR-181 patients only rose by 0.92. This result was shown to be statistically significant, meeting the study's primary endpoint.

In addition, NKTR-181 was able to meet all of the study's secondary endpoints and demonstrate a favorable safety profile. These results caused Dr. Martin Hale, a clinical investigator and medical director of Gold Coast Research, to state:

The data from this efficacy study are extremely important because they demonstrate that NKTR-181 produces strong analgesia in patients suffering from chronic pain while NKTR-181 has also demonstrated significantly lower abuse potential than oxycodone in a human abuse potential study.

Dr. Hale later went on to say that NKTR-181 could be a "transformational pain medicine."

The terrific clinical news caused traders to bid up shares.

Lower back pain is the second most common cause of disability in the U.S., and it costs America roughly $100 to 200 billion per year in direct and indirect costs. Estimates show that roughly 39 million Americans suffer from some type of persistent pain, which hints that the market opportunity for new pain therapies is enormous. Since NKTR-181 has already been granted fast-track designation by the FDA, it's easy to understand why traders are feeling bullish.

As for next steps, Nektar stated on its last conference call with investors that it plans to out-license the drug to "a company that has a strong presence and long-term commitment in the pain market." This is the same tactic that was used to bring Nektar's drug Movantik to market as the company signed a deal with pharma giant AstraZeneca. If the company can successfully find a partner, it could easily lead to a nice payday.