Please ensure Javascript is enabled for purposes of website accessibility
Log In Help Join The Motley Fool
Free Article Join Over 1 Million Premium Members And Get More In-Depth Stock Guidance and Research
By Keith Noonan, Dan Caplinger, and Jason Hall - Mar 21, 2017 at 11:41AM

These stocks could help you beat the dollar's declining purchasing power.

Risk is a factor in every investment, but the effects of inflation mean that it's also risky to avoid investing. With the U.S. Department of Labor reporting that consumer prices over the last 12-month period have climbed at their fastest rate in five years (up 2.7%), it's a good time to think about stocks that are well-tuned for beating inflation.

Read on to learn why our panel of writers identified JPMorgan Chase (JPM 1.28%), Brookfield Infrastructure Partners (BIP 1.86%), and PepsiCo (PEP 1.64%) as investments that could help you keep ahead of the depreciation curve. 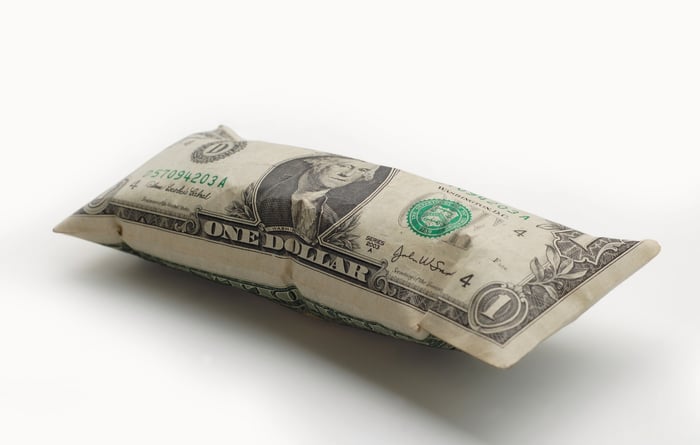 This stock is built for inflation

Jason Hall (Brookfield Infrastructure Partners): There are a lot of stocks that can do well during inflationary periods, but the businesses that tend to do best are ones which serve markets with consistent demand through every economic environment, and also have pricing power that allows them to increase prices with inflation. Brookfield Infrastructure Partners has both of these attributes in spades.

First is the relatively steady nature of cash flows from the assets it owns and operates. 90% of cash flows are either contracted with customers or regulated. And since its assets are largely utility-like in nature, including energy transmission, distribution, and other similar infrastructure assets, those businesses generate strong and steady results under nearly all economic conditions. Furthermore, 70% of its cash flows are indexed to inflation, giving it a substantial margin of safety against rising commodity prices that could affect its profits.

Furthermore, Brookfield Infrastructure's business is incredibly geographically diverse. That in and of itself offers some protection against inflationary pressures which may affect one country or economy.

Finally, Brookfield Infrastructure Partners is an incredibly well-run business, with its general partner, Brookfield Asset Management, very good at allocating capital for consistent long-term cash flow growth. This has led to strong share price and dividend growth since its IPO: 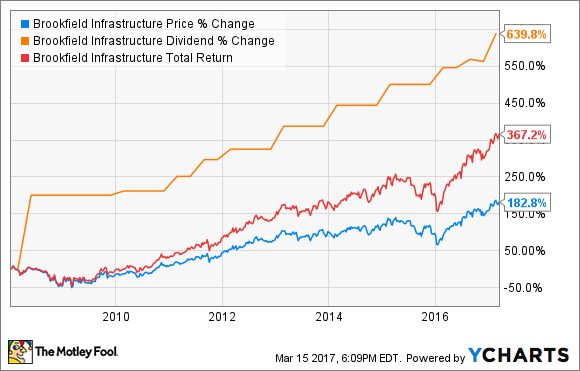 And while it's not an ideal investment in a retirement account, since it is a master limited partnership, it's a wonderful business to own in your taxable accounts, whether inflation is a big risk or not.

An unexpected way to handle inflation

Dan Caplinger (JPMorgan Chase): The idea that a bank like JPMorgan Chase might benefit from inflation is largely foreign, because under typical circumstances, financial institutions can suffer during inflationary periods. Rising inflation leads to higher interest rates, which in turn can depress levels of economic activity throughout the financial system. Banks don't directly suffer because most of their loans carry variable rates that adjust automatically to the rising-rate environment, but if loan volume falls, then it can hit profits.

However, JPMorgan Chase is attractive now for a couple of reasons. First, interest rates are currently so low that banks like JPMorgan can't necessarily maximize their net interest margin because the rates they pay on deposits can't go below zero. Bank stocks have soared recently precisely because rising rates could help restore interest margin levels to more normal conditions, and JPMorgan in particular stands to benefit from higher profits. Moreover, JPMorgan also has an extensive investment banking business, and the need for clients to adjust their strategies to handle inflation could serve that part of the Wall Street bank's business very well. Too much inflation might not be ideal for JPMorgan Chase, but a slight uptick would be welcome news indeed in light of current conditions in the financial markets.

During high inflationary periods, consumer goods companies that can raise their prices tend to fare better than those that have less pricing flexibility, and brand strength is crucial to passing price increases on to customers in the sector. PepsiCo has it in spades. Between popular products like Lay's potato chips, Gatorade, Tropicana orange juice, Quaker Oats, and its line of soft drinks, PepsiCo has some of the strongest beverage and snack brands around -- and boasts 22 individual brands that each generate at least $1 billion in annual retail sales.

As for the dividend component, stocks with strong yields and histories of payout increases can be counted on for reliable income generation that works to offset inflation. Pepsi stock carries a solid 2.7% dividend yield, and the company is set to deliver its 45th consecutive year of dividend increases, so it's reasonable to expect future payout boosts. Even if PepsiCo's share price were to wind up flat over the next decade, and the company opted not to increase its dividend payout over the stretch, its dividend yield matches the rate of consumer price inflation over the last year and would produce better returns than a 10-year U.S. Treasury Bond (yielding roughly 2.5%).

PepsiCo stock isn't without downside risk, but trading at roughly 21 times forward earnings, it's fairly priced for a well-run company that has significant competitive advantages in its space and looks like a strong choice for staving off inflation.