These struggling stocks led the market lower. Here's what investors need to know.

The stock market declined modestly on Tuesday, putting equities on track for one of their worst showings of 2017 so far. The Dow Jones Industrial Average fell about 238 points, or just over 1%, while the broader indexes put in similar performances. Even so, a few individual stocks fared worse than most, including Under Armour ( UAA -0.13% ) ( UA 0.10% ), Canadian Solar ( CSIQ -7.67% ), and Bank of America ( BAC -2.27% ). Let's take a closer look at what caused these declines.

Growth for Under Armour -- but at what cost?

Shares of Under Armour are still reeling after the company's disappointing fourth-quarter 2016 report in late January. But Under Armour stock declined 3% today, closing pennies from a fresh 52-week low amid branding concerns over its new partnership with discount shoe specialist DSW ( DBI -3.66% ). 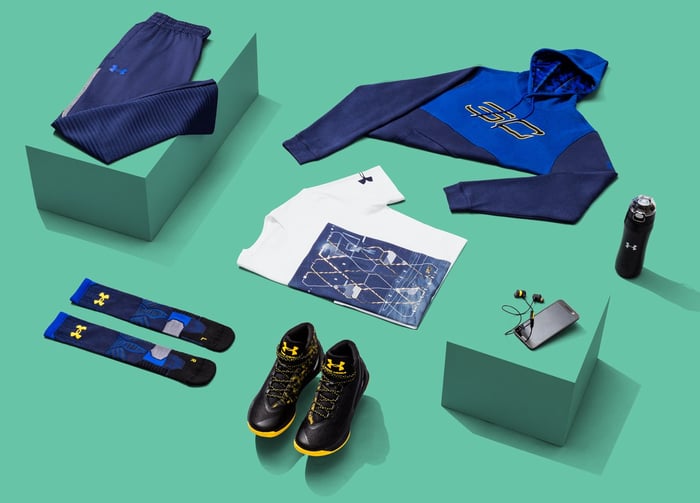 Last week, DSW management revealed that Under Armour has entered into a new partnership to develop unique products for the retailer. And yesterday, Under Armour management confirmed it will start selling these products at all DSW locations this July, just in time for the crucial back-to-school season.

Footwear was one bright spot in Under Armour's last quarterly report, with segment revenue climbing a healthy 36% year over year. But given Under Armour's status as primarily a premium brand -- and considering footwear tends to come with lower margins than Under Armour's more sluggish performance apparel business -- industry analysts worry that the DSW deal could negatively effect that premium image, its pricing power, and its margin profile down the road.

It's fine that Under Armour is striving to reaccelerate growth. But it's hard to blame investors for being uncomfortable if that growth comes at the expense of their valuable brand.

Meanwhile, Canadian Solar stock plunged 9% after the solar energy products company posted its own disappointing quarter. Net revenue fell 40.3% year over year, to $668.4 million, or slightly below the midpoint of its guidance, which called for $600 million to $750 million. The decline was driven by continued falling average selling prices despite record-high solar module shipments in the quarter. On the bottom line, that translated to a net loss of $13.3 million, or $0.23 per share. Adjusted for one-time items -- which notably includes an anti-dumping and countervailing duties (AD/CVD) true-up provision of $44.1 million related to module sales last year -- Canadian Solar's adjusted net income was $14.2 million, or $0.24 per share.

Wall Street's expectations were much more optimistic, with consensus estimates calling for adjusted earnings of $0.32 per share on revenue of $690.3 million.

"Our fourth quarter of 2016 gross margin was impacted by the significant AD/CVD true-up that was based on the preliminary Department of Commerce ruling," elaborated Canadian Solar CFO Huifeng Chang. "We plan to vigorously contest the preliminary results in the final phase of the DOC reviews."

In the meantime, Canadian Solar will continue to manage costs and solidify its market-leading position. But given its relative underperformance today, it's no surprise to see shares go dim.

Finally, the banking sector got hit hard on Tuesday, with the Financial Select Sector SPDR ETF down nearly 3%. And Bank of America ( BAC -2.27% ) stock, for its part, fell almost 6%. This decline comes as investors worry over the effects of both a flattening Treasury yield curve (10-Year Treasury yields fell today) and concerns that President Trump may have trouble pushing through his plans for infrastructure spending and growth-friendly tax reform.

To be fair, Bank of America pulled back after hovering near a 52-week high for the last several trading days. And bank stocks, in general, have climbed this year on the promise of reduced regulation, spurred economic growth, and attractive Treasury yields. But ahead of a key House vote on Thursday for the Republicans' health bill -- the failure of which could foreshadow similar difficulties for other Republican policies -- it's evident that Bank of America investors are nervous that those catalysts may not materialize.