Follow @7investingSteve
Follow @7investingSteve
Nike Inc. (NYSE:NKE) released fiscal third-quarter 2017 results Tuesday after the market closed. The athletic footwear and apparel juggernaut came in just below Wall Street's prediction for top-line growth, and offered an underwhelming look ahead. But Nike also managed to increase earnings at a healthy clip, bucking expectations for a year-over-year decline.
Let's dive deeper to see what drove Nike's business over the last three months, and what to expect. 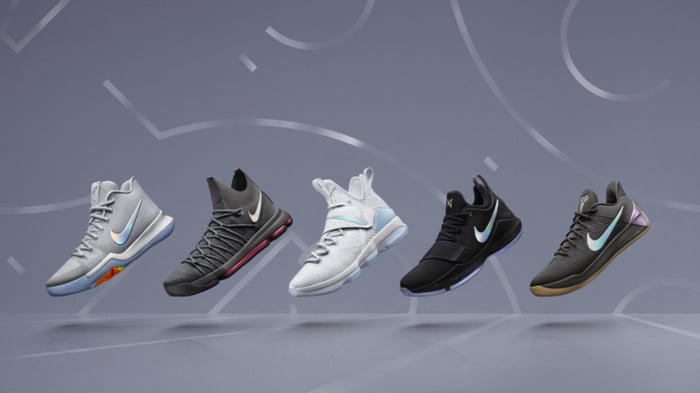 "The power of NIKE's diverse, global portfolio delivered another solid quarter of growth and profitability," added Nike chairman and CEO, Mark Parker. "To expand our leadership and ignite NIKE's next phase of growth, we're delivering a relentless flow of innovation through performance and style, increasing speed throughout the business and creating more direct connections with consumers leveraging digital and membership."

The consumer has decided digital isn't just a part of the shopping experience. Digital is the foundation of it. This and other factors have shifted consumer patterns -- especially in North America -- impacting traffic, the economics of brick-and-mortar retail, and driving a more promotional environment in the near term. While we are mindful of these near-term dynamics, we remain focused on the long term. The current backdrop represents a tremendous opportunity for NIKE, because the brands that win are going to be the ones that have been out in front with digital and leading with service.

Nike Brand futures are down 4% as reported from the same year-ago period, and down 1% at constant currency. But to be fair, during the call Nike CFO Andy Campion reiterated his past assertion that "futures are an important part of our operating model, but futures growth is no longer a reliable proxy for revenue growth based upon several factors we've previously articulated."

More specifically, recall that direct-to-consumer revenue is reported based on the full retail price to consumers, while futures are reported on a wholesale basis. In addition, Converse, Hurley, and Nike Golf are not included in futures.

As such, Nike expects reported revenue in the fiscal fourth-quarter 2017 to increase in the mid-single-digit percentage range, or slightly below revenue growth in fiscal Q3. But this is also below the 7.4% growth for which investors were looking. On a constant currency basis, revenue should increase in the high single digits.

Nike is doing an admirable job delivering earnings growth and returning capital to investors in this difficult retail environment. But given its top-line underperformance -- at least relative to the market's expectations -- it's no surprise to see shares pulling back.