Baidu (NASDAQ:BIDU) and Tencent (OTC:TCEHY) are generally considered fierce rivals in the Chinese internet market. Both companies are expanding their online-to-offline (O2O) ecosystems by bundling multiple services within their mobile apps, and both companies frequently invest in rival companies.

However, Baidu and Tencent recently came together to lead a 600 million yuan ($87 million) funding round in Shanghai-based electric vehicle maker NIO, formerly known as NextEV. That round -- which attracted other major investors like DG Capital, TPG, Hillhouse Capital, and Lenovo -- valued the start-up at 20 billion yuan ($2.9 billion). NIO has raised nearly $1 billion within the past two years. 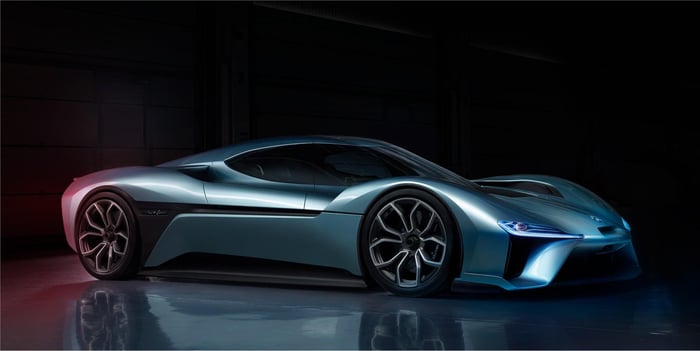 NIO was founded in 2014 by Li Bin, the former chairman of Chinese automotive marketing site Bitauto.com. Last November, NIO unveiled the EP9, which set a world record as the fastest electric vehicle in the world at the Nürburgring Nordschleife racetrack in Germany. The company also recently announced that it would launch its NIO EVE autonomous EVs in the U.S. market in 2020.

Why this investment matters to Baidu

Baidu is commonly called the "Google of China", but its core search business has been slowing down due to competitive pressure from social networking rivals like Tencent's WeChat and Weibo, e-commerce rivals like Alibaba's Taobao and Tmall, and a government crackdown on misleading ads -- particularly regarding healthcare products.

Baidu is trying to offset that slowdown by expanding into adjacent markets like cloud services, artificial intelligence, and driverless cars. Those three businesses can be integrated with Baidu's market-leading search and maps -- which could eventually let users hail a ride from the Baidu app, pay with Baidu Wallet, and be ferried to their destination by an autonomous EV.

That's why Baidu recently made some big moves into the automotive market. It started testing out driverless cars on public roads in late 2015, formed a driverless tech research center in Silicon Valley last April, and unveiled the fully autonomous, Chinese-made Chery eQ EV last August. Baidu has declared that its first commercial vehicle, an autonomous shuttle bus, will arrive next year.

Why this investment matters to Tencent

Tencent owns the biggest social networks in China -- its QQ chat app has 877 million monthly active users (MAUs), and its WeChat mobile messaging app has 846 million MAUs. Over the past few years, Tencent expanded WeChat from a basic messaging app into a platform which lets users hail cabs, make payments, order products, play games, and perform other tasks without ever leaving the app.

This strategy, which lets Tencent build an app ecosystem within iOS and Android without actually owning a mobile OS, forced Baidu and other rivals to add similar services to their apps. Like Baidu, Tencent wants its users to seamlessly hail autonomous EVs from WeChat and make payments with its WePay mobile wallet.

Baidu and Tencent's driverless efforts won't clash until autonomous EVs actually hit public roads, but the Chinese government wants 10% of all cars within the country to be self-driving by 2030. For now, the battles between Baidu and Tencent will be waged with the expansion of their O2O ecosystems, investments in companies like NIO, and the founding of new companies like Hexiefuteng.