Please ensure Javascript is enabled for purposes of website accessibility
Log In Help Join The Motley Fool
Free Article Join Over 1 Million Premium Members And Get More In-Depth Stock Guidance and Research
By Timothy Green - Mar 23, 2017 at 10:00AM

After years of no competition and outrageous margins, Chipzilla faces three distinct threats to its data center empire.

Intel (INTC -0.17%) has enjoyed a near-monopoly in the server chip market in recent years, with a market share of roughly 99%. Its x86 chips are the standard, and without any real competition from Advanced Micro Devices (AMD -0.31%), the only other x86 chip maker, Intel has been free to enjoy its dominance. 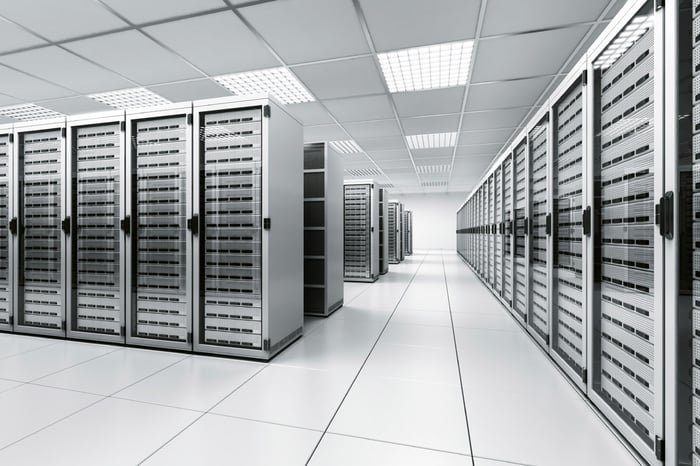 The company is now warning that data center growth will slow and margins will contract, reflecting a return of competition to the server chip market and its plan to bring server chips to new process nodes before PC chips. Intel expects sales of its server CPUs to grow by just 6% annually through 2021, and for its data center operating margin to drop to the low- to mid- 40% range.

These lower estimates may not be pessimistic enough. Intel faces three distinct threats in the data center, all of which could eat away at its market share and its margins.

The return of AMD

AMD's server chip business has been insignificant for quite some time. The company was once a major force, with a roughly 26% unit share of the x86 server chip market in 2006. But it has been outclassed by Intel ever since, driving its market share down near zero.

AMD will make its return to the server chip market later this year when it launches Naples, server chips built on its Zen architecture. AMD has already launched Ryzen, the PC version of Zen, and while reviews have been mixed, AMD has significantly closed its performance gap with Intel. AMD still can't compete when it comes to single-threaded performance, but Ryzen's copious cores and competitive pricing make the chips a clear winner for certain workloads.

Naples will come with up to 32 cores, and AMD is touting memory bandwidth and input/output capacity as the key selling points. Compared to a comparable Intel Xeon chip, AMD claims that Naples will have 45% more cores, 60% more I/O capacity, and 122% more memory bandwidth. If Ryzen is any indication, Naples will certainly be superior for some workloads, but it's unlikely to best Intel in general.

Still, Naples should make AMD a player in the server chip market once again, forcing Intel to compete for the first time in years. Exactly how much market share AMD will be able to win is anyone's guess, but it's all downside for Intel.

The push toward an architecture-agnostic cloud

Beyond AMD and x86 chips, there are two other threats to Intel's server chip monopoly. ARM chips are finally making their way to the data center, with Microsoft recently announcing that its Project Olympus server design now supports both x86 and ARM chips. The company is already testing ARM chips from Qualcomm and Cavium for search, storage, and machine learning, and it has created a version of Windows Server for ARM processors.

Microsoft isn't the only cloud computing company looking to lower its dependence on Intel. Alphabet's Google announced last year that it was developing an open server architecture that supports the upcoming POWER9 processor from IBM. Google's toolchain fully supported POWER at the time of the announcement, allowing the company to use POWER processors in conjunction with chips from Intel.

The push from the major cloud infrastructure providers to support different architectures isn't surprising. Shifting from a world where Intel is the only option to a world where there are a multitude of options will surely bring server chip prices down, allowing cloud computing to get cheaper and further eat into the traditional server market.

The glory days of Intel's server chip empire are coming to an end. The data center segment will continue to throw off plenty of cash for Intel, but market share and margins are going to take a hit. It's impossible to predict exactly how much share Intel will lose, or how far its margins will fall. But it's safe to say that Intel's server chip monopoly isn't long for this world.