Next up is an anticipated return to bona-fide growth, at least according to the "long-term global growth plan" McDonald's presented during its annual investor day earlier this month.

The plan consists of three major operational initiatives which themselves rest on three "strategic pillars." Taking a cue from the company's breakfast menu tweak last year, known as All Day Breakfast 2.0, we can think of this plan as a blueprint for a post-turnaround McDonald's 2.0.

In this two-part article series, we'll look at both the stated plan and the financial model behind it, to see if McDonald's is primed for both sales and profit resurgence. 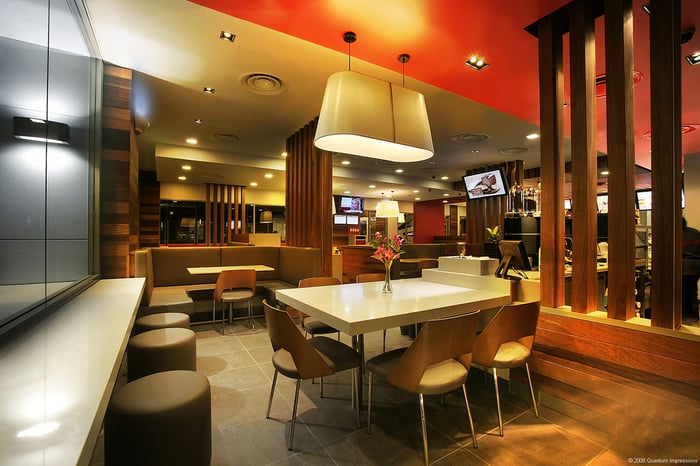 The plan, expressed in four words

You can find the crux of McDonald's rejuvenation formula buried in the middle of its March 1 investor day press release, in a quote from CEO Steve Easterbrook (emphasis added): "To deliver sustained growth, we have to attract more customers, more often."

While this may seem obvious, it's particularly relevant to the way McDonald's wants to rebuild its revenue. Improving recurrence of visits among existing and new customers is a much more effective revenue lever than simply tacking on new guest counts, or worse, ramping up core customer frequency without attracting new patrons.

The decline of guest traffic continues to be McDonald's greatest single obstacle in getting back to consistent growth. During the investor conference, the company revealed that it had lost 500 million customer visits in the U.S. since 2012.

Yet its traffic trends are already improving -- or at least they appear to have bottomed out. According to Statista.com, during spring 2016, the number of people who reported visiting a McDonald's within the past 30 days equaled 106.5 million.

During the conference, McDonald's revealed three operational initiatives aimed at repairing guest counts. The organization believes it can prosper by:

Of these three initiatives, delivery will likely remain in test mode for some time, although management points out that in Asia, delivery services have already become mainstream. McDonald's reports that it now completes $1 billion of delivery sales annually in markets including South Korea, China, and Singapore.

In the near future, "enhancing digital capabilities" will exert a more direct impact on traffic, and in 2017, this phrase translates to the introduction of mobile order and pay.

The company hopes to shorten drive-thru lines by allowing customers to pre-order on mobile devices, although they'll still have to check in at restaurants before orders are fulfilled. But patrons will be able to opt for curbside delivery, thus improving throughput in the drive-thru line.

The roll-out of mobile order and pay, slated for later this year, is an event shareholders should watch closely. It's an operationally complex change in procedure which will almost certainly entail some initial error and modifications.

But if the launch shaves even a few seconds off McDonald's current drive-thru service average of 208 seconds, executives will consider it a success, and core customers may turn up more frequently if a perception of more convenient, speedier service solidifies.

The strategy underlying the initiatives

The operational items listed above arise from a fleshed out vision of enticing "more customers, more often," in which McDonald's has stratified its visitors into three major categories: Existing, Lost, and Casual Customers. Each category has its own pithily stated action plan:

If you follow McDonald's closely, you're probably familiar with the ideas expressed in the organization's "retain" and "regain" strategies. But the push to convert casual customers to committed ones is surprising. I've argued often that core menu innovation is the bridge the company needs to cross in order to grow at an appreciable rate in the future.
Here however, McDonald's is signaling that core menu innovation, at least in the United States, is still going to proceed at a careful place. Instead, it's going to rely on new McCafe products as the differentiator to connect with the "casual" customer.
If this sounds like a plan to peel away some of Starbucks Corporation's  (NASDAQ:SBUX) aficionados, you're not far off the mark. Think croissants, not burgers. McCafe bakery concepts in Toronto and Paris, which resemble coffee shops more than fast-food eateries, hint at the current experimentation which seeks to "exploit untapped demand." McDonald's is using these global locations to test pairings of upgraded coffee and pastries, as well as bistro-style sandwiches; turf that at current scale Starbucks controls exclusively.
It's important to note, however, that McDonald's doesn't need to go head-to-head with Starbucks: The successful introduction of free-standing, coffee-centric cafes in the U.S. could provide the company a small but significant revenue stream in the coming years.

Should you buy the plan McDonald's is offering?

Ultimately, McDonald's 2.0 is a company striving to keep up with digital and operational industry trends while tentatively exploring menu extension aimed outside the fast-food burger realm. McDonald's can't change its identity overnight -- to do so would risk alienating its fundamental, value-driven core customer. But the organization is embarking on thoughtful incremental change. The new global growth plan is a fairly realistic combination of pragmatism and ambition, which should give longer-term shareholders a rationale for continuing to hold shares.
Of course, any overarching strategy should be assessed alongside a company's financial performance. In the second half of this two-part series, we'll assess the state of McDonald's current financial model.
This article represents the opinion of the writer, who may disagree with the “official” recommendation position of a Motley Fool premium advisory service. We’re motley! Questioning an investing thesis -- even one of our own -- helps us all think critically about investing and make decisions that help us become smarter, happier, and richer.