Which drugmaker do you think has the most debt?

Some might think the correct answer is Valeant Pharmaceuticals (NYSE:BHC). After all, the company is shedding assets to try to reduce its massive debt load. However, Valeant doesn't have the highest debt among pharmaceutical companies. That dubious honor goes to Pfizer (NYSE:PFE), with AbbVie (NYSE:ABBV) trailing not too far behind.

You probably haven't heard much (if any) discussion about Pfizer's or AbbVie's debt, though, while Valeant's debt struggles have received plenty of attention. Here's why. 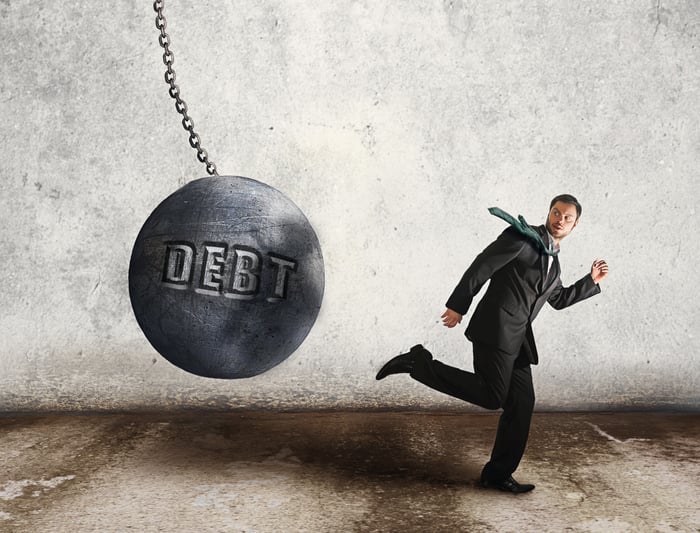 Pfizer's total debt stands at $42 billion. AbbVie has a debt load of nearly $37 billion. Those figures might make Valeant's total debt of just under $30 billion not look too bad. So why does Valeant's debt come under scrutiny while Pfizer's and AbbVie's don't? It's not the size of the debt that's important. It's how well each company can manage its debt that matters most.

One key way to determine if a company can manage its debt load effectively is to look at total debt in comparison with net income. If net income is large enough, even a high level of debt shouldn't be a problem for a company. 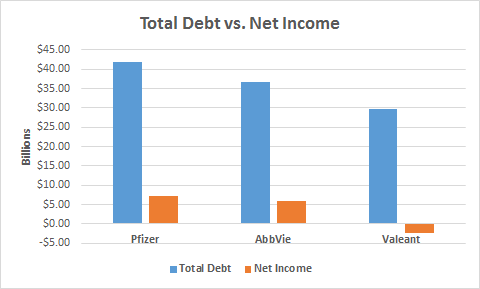 This chart shows why Valeant's debt is so problematic. The company has a large debt load but is losing money. While Pfizer's and AbbVie's debt loads are even higher, both drugmakers are generating plenty of profits that allow them to operate without feeling tremendous pressure.

The short and long of it

So far, we've only talked about total debt. But there are two kinds of debt that companies report on their financial statements -- long-term debt and short-term borrowings.

Long-term debt includes all financial obligations that extend beyond a 12-month period or the current business year, such as bonds and leases. Short-term borrowings are due within the next 12 months or current business year and include items such as short-term bank loans, accounts payable, and wages due to employees.

Nearly all of AbbVie's and Valeant's debt is of the long-term variety. However, $10.7 billion of Pfizer's total debt is short-term borrowings (including the current portion of the company's long-term debt).

Is one kind of debt better or worse than the other? Not necessarily. Short-term borrowings tend to have higher interest rates than long-term debt, but that doesn't mean that taking on short-term debt is always a bad move for a company.

In Pfizer's case, the big drugmaker keeps a significant portion of its cash outside of the U.S. As a result, Pfizer sometimes will borrow money on a short-term basis to cover some operational costs in the U.S. That's actually a smart decision, though, because the tax costs of bringing the cash into the U.S. from overseas exceed the interest costs of the short-term borrowings.

When should investors really worry about a company's debt? If total debt exceeds total assets, worry. Really worry. Valeant hasn't hit that point and probably won't. The company is selling off some of its assets, but it's using the proceeds to pay down debt. That's a good strategy considering the predicament that Valeant is in.

AbbVie's condition isn't nearly as bad as Valeant's because of the biotech's strong cash flow and earnings growth. However, especially after the acquisition of StemCentrx last year, it probably wouldn't be smart for AbbVie to take on much more debt.

What about the drugmaker with the highest debt of all? Pfizer shareholders have nothing to be alarmed about. The company can easily manage its debt. Its total assets are more than four times larger than its total debt. And Pfizer's cash flow is solid, with its bottom line improving. No worries.