Please ensure Javascript is enabled for purposes of website accessibility
Log In Help Join The Motley Fool
Free Article Join Over 1 Million Premium Members And Get More In-Depth Stock Guidance and Research
By Matthew DiLallo - Mar 25, 2017 at 9:00AM

While fracking unlocked an unimaginable supply of shale gas and oil, the boom in oil wells is heavily concentrated in just four U.S. states.

Believe it or not, America has been fracking oil wells since right around the time of the Civil War. That said, modern oil well fracking didn't start taking shape until the 1940s, and it wasn't until the 1990s when it was combined with horizontal drilling to unleash the shale gas boom. The industry eventually transferred those two techniques into oil drilling when Continental Resources (CLR 0.47%) drilled the first commercially successful well in the North Dakota Bakken.

The industry has since taken that combo to other U.S. states, enabling the country to unlock a treasure trove of shale oil resources. That said, according to the U.S. Energy Information Administration, seven regions accounted for 92% of the country's shale oil growth in recent years:

The Lone Star state has not one but two premier shale oil plays: The Permian Basin and Eagle Ford Shale. In many ways, the Permian Basin is the gift that keeps on giving. The legacy oil basin has already delivered nearly 29 billion barrels of oil since it first started producing in 1921 and currently accounts for 14% of the country's total production. However, its best days appear to lie ahead thanks to the discovery of several stacked shale plays in the region. One of the leading drillers in the basin, Pioneer Natural Resources (PXD 0.39%), believes that oil production in the Permian could grow from around 2 million barrels per day to as much as 5 million barrels per day over the next decade. Pioneer expects to be one of the drivers of that growth, with the company projecting that its oil output will grow from an average of about 133,000 bpd last year up to 700,000 bpd by 2026 as part of its 10-year growth plan.

Lost in all hoopla surrounding the Permian is the incredible emergence of the Eagle Ford Shale over the past several years. While the Permian has been around for nearly a century, drillers didn't even discover the Eagle Ford until 2008. However, thanks to investments by EOG Resources (EOG 1.07%) and other large drillers, it has grown into one of the top-producing oil fields in the world. That said, there is still plenty of oil in the ground, with EOG Resources estimating that its acreage position alone holds 3.2 billion barrels of oil equivalent (BBOE) resources. While that's about half the 6 BBOE resource EOG has in the Permian, the Eagle Ford will continue to be a major growth driver for the industry and the state of Texas. 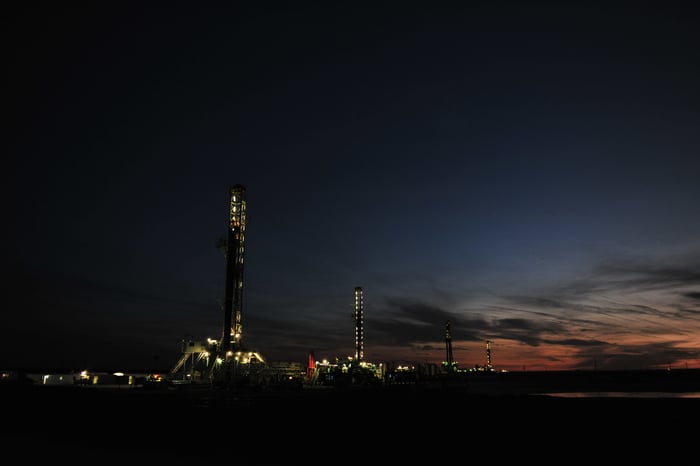 The Bakken is down but not out

Thanks to the early work of Continental Resources and others, the Bakken Shale of North Dakota became the catalyst for the shale oil boom. As the following chart shows, output in the state had been on a steady decline for years until about a decade ago when producers used the combination of fracking and horizontal drilling to unlock the vast amount of crude trapped in the Bakken's tight rocks: 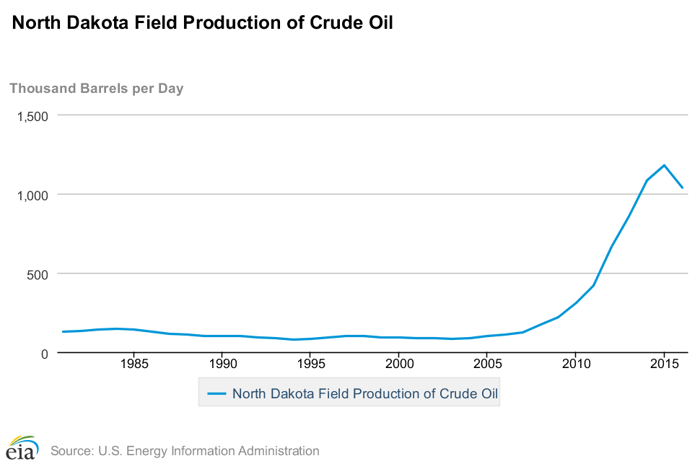 The state's output peaked in 2015 and started to decline because leading Bakken producers Continental Resources, EOG Resources, and Whiting Petroleum (WLL) significantly cut back on drilling new wells. Continental, for example, initially slashed its drilling budget 67% last year, while Whiting cut its by 80%. However, with oil prices stabilizing and costs coming down, the state's production is expected to recover this year. Continental Resources, for example, expects that its production in the Bakken will grow 26% by the end of this year compared to its output level at the end of 2016, while Whiting anticipates that its production will increase by 23% over that same time frame.

The final major shale oil region is the Niobrara Shale, though that is just one of several shale layers in the Rockies. Because of that, the industry often separates the Rockies into the DJ Basin of Colorado and the Powder River Basin in Wyoming.

EOG Resources was one of the first major shale drillers to call attention to the region in mid-2014 when it announced the discovery of four drillable shale sections in Wyoming. Since that time, the company has worked to build its opportunity set in the region and now has more than 300 future drilling locations that can generate premium returns at $40 oil -- and about as many premium sites as it currently controls in the Bakken.

Whiting Petroleum is another company looking to the Niobrara to drive future growth after building up a significant acreage position in Colorado. While Whiting doesn't produce as much oil from the Niobrara as it does from the Bakken, the company does plan to spend about 40% of its capital budget on the play this year to increase its output from the region.

While several states are benefiting from the shale oil boom, as the old saying goes, everything is bigger in Texas. That's certainly true of when it comes to shale resources, where the state boasts holding the nation's two largest shale oil plays, which help Texas to supply a quarter of the country's production. Meanwhile, thanks to the abundant resources of those two shale plays, the state's oil output should continue to grow at a healthy clip for several years as drillers ramp up activities.