Please ensure Javascript is enabled for purposes of website accessibility
Log In Help Join The Motley Fool
Free Article Join Over 1 Million Premium Members And Get More In-Depth Stock Guidance and Research
By Daniel B. Kline - Mar 27, 2017 at 6:26AM

Some people blow it on frivolous purchases, but not as many as you would think.

As tax season gets into full swing, consumers get bombarded by companies looking to get a piece of their tax refund.

Retailers, car dealers, and pretty much anyone who has something to sell recognizes that a little extra money can burn a hole in some people's pockets. And since the average American got a refund of $3,120 in 2015, according to the Internal Revenue Service (IRS), there are an awful lot of folks flush with cash to be targeted by people looking to peddle their wares.

But just because some Americans spend their refunds quickly, foolishly, and maybe even recklessly doesn't mean most of us are going to waste this once-a-year windfall. In fact, according to new research from Bankrate.com, a surprising number of people who get tax refunds have responsible plans for the money. 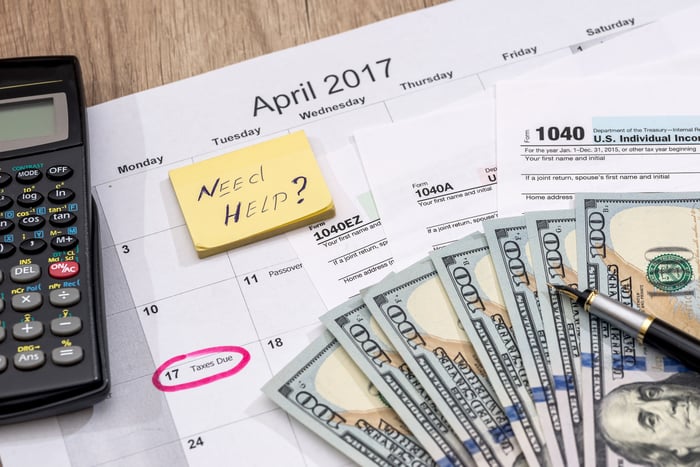 While the idea of spending your tax refund on something less than necessary certainly has some appeal, the vast majority of Americans resist that temptation. Only 6% of U.S. adults who get money back from the IRS in 2017 (for the 2016 tax year) will splurge on a vacation or a shopping spree, according to Bankrate.

In fact, the number of people who will be either saving or investing their refund or spending it on things they need, like food, or to keep the gas or electricity on, is at the highest rate since Bankrate first did this study in 2010. Over one-third (34%) of Americans getting a refund plan to save it or invest it, while 29% plan to put it toward necessities, and 27% will use their tax windfall to pay down debt.

About half of all Americans will receive a refund in 2017, with the highest percentage of those getting one being millennials, among whom two-thirds of filers (66%) will get money back from the IRS. Roughly half (49%) of Generation X tax filers will get a refund, with the numbers going down as the generations' ages go up. Only 34% of baby boomers will get money back from the IRS, while only 26% of the Silent Generation will.

Millennials are actually the age group most likely to have already filed their 2016 returns, and the age group most likely to save or invest their refund. This shows a sense of responsibility and overall financial savviness among young adults. They're setting up a solid foundation for their future financial selves. It can be tempting to splurge with that refund, but saving it is so much smarter; consider it an investment in yourself.

This is good news and bad news

It's encouraging to see a growing number of Americans use their tax refund to save, invest, or pay down debt. Learning to save and not going for the quick, fleeting pleasure of a trip, a new car, or some other temporary luxury can have powerful benefits. One of my Motley Fool colleagues showed the following example of just how much money can pile up if the average American invested about two-thirds of his or her tax refund each year:

Past stock market returns are not a guarantee of future results, but you can guarantee that a vacation, a car, or most other purchases will decline in value or have zero value after use. Before investing, moreover, the best thing you can do is pay off high-interest loans, which for most people means credit cards.

It's also smart to have a six-month emergency fund that's easily accessible before you start tying your money up in long-term investments, even if they are liquid. Basically, if you get a tax refund, use it to put your financial house in order and if you've done that, use it to build yourself a more prosperous future.