When Tesla (NASDAQ:TSLA) began construction on its $5 billion Gigafactory in Nevada, a lot of company observers saw it as a bold but wise move. At worst, if demand for electric vehicles and energy storage didn't shape up as projected, the company would be able to sell batteries to cellphone manufacturers.

As the Model 3 nears its launch date, the Gigafactory is ramping up production to meet demand for the 500,000 vehicles Tesla plans on making next year. At the same time, Tesla's success in EVs and the growth of energy storage haven't gone unnoticed by competitors. Companies around the world are building out battery capacity to fill the needs of automakers and energy storage developers alike. And rising capacity is driving overcapacity, leading to lower battery prices. If the trend continues, competitors will be able to ride the industry's commodity prices while Tesla will have to contend with the falling value of batteries coming out of the Gigafactory. Here's why that's a challenge in the long term.

How the battery industry became oversupplied

When Tesla began building the Gigafactory, it was expected to nearly double the world's battery production when it opened. And if Elon Musk was going to make 500,000 EVs per year, he needed to make a bet that big on batteries.

But since then, lots of competitors have begun expanding battery capacity. BYD, AESC (owned by Nissan and NEC), LG Chem, Samsung, and other Asian suppliers are building out their own capacity in an effort to capture market share. And while capacity is opaque, there are indications that there will be more than enough supply for everyone. Sources I've talked to say that finding supply is the least of their worries, and prices on the open market are below $300 per kWh and falling. Costs are expected to fall further as oversupply hits the market, with manufacturers likely to sell near their own cash costs just to gain market share. One sign that batteries aren't a business that's very attractive is that Nissan has decided to sell its stake in AESC, having decided it's a better idea to buy batteries on the open market. Through its partnership with Panasonic and the Gigafactory buildout, Tesla is moving in the opposite direction. 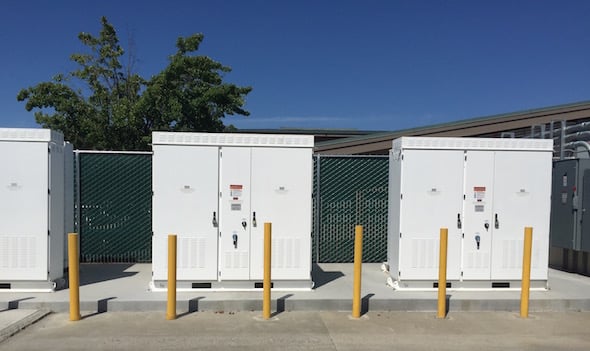 On the demand side, EVs haven't taken hold as fast as many had predicted. In 2008, President Obama said he wanted 1 million EVs on the road by 2015. We might not hit that level in the U.S. until 2020. Even Tesla, for all its success, has repeatedly missed its own production and sales targets. That trend could change, but companies are investing in new battery capacity for projected demand for EVs and energy storage. For now, a combination of slower-than-hoped-for growth in EV demand and a boom in battery supply will leave the market oversupplied with batteries for the foreseeable future.

There's a parallel to solar energy

There's no question that the EV industry is growing, and so is energy storage, so there is some good news. But how quickly demand and capacity grow can tell us a lot about how companies will perform financially. If the market is undersupplied, you want to have some captive supply of batteries to meet your customers' needs. But if it's oversupplied, you want to buy product that manufacturers are dumping on the market at low costs. And buying batteries on the open market can save billions in capital costs to build capacity, too.

This same dynamic happened in the solar industry a decade ago and in some ways continues today. Everyone gets excited about the growth of the solar industry, so suppliers build as much capacity as they can. But demand doesn't grow as quickly as supply, and thus the market becomes oversupplied. Panel prices fall, making the product less valuable. Technology improves and the cost structure of new manufacturing gets better, and the cycle begins again.

Five to 10 years after solar plants were completed, most of them were obsolete. You can see the financial devastation in former global capacity leaders Suntech Power and Q-Cells going bankrupt and in the more recent collapse of Yingli Green Energy. The solar companies who have done well weren't panel manufacturers, they were companies buying solar panels from commodity suppliers and riding the falling commodity prices in the industry.

The supply of batteries doesn't appear to be the problem

When Tesla decided to build the Gigafactory, it did so because it needed to ensure battery supplies for its massive EV and energy storage growth plans. Today, the market appears to be flush with batteries, and competitors can buy them on the open market at costs similar to Tesla's manufacturing costs without the headache of actually building a battery plant. Some are even buying batteries directly from Tesla, which is reporting gross margins in energy in the low single digits.

Tesla is going to need to keep producing batteries at or below the cost of competitors' or risk being at a competitive disadvantage. Given the similarities between the battery market today and the solar industry a decade ago, and the fact that building massive manufacturing capacity was the surest sign of future financial trouble in solar, investors need to watch closely how Tesla executes its battery strategy. Building out capacity can seem like a good idea, but not if that leaves you captive to older technology when competitors are buying better technology for less.