Please ensure Javascript is enabled for purposes of website accessibility
Free Article Join Over 1 Million Premium Members And Get More In-Depth Stock Guidance and Research
By Reuben Gregg Brewer - Mar 28, 2017 at 10:23AM

If you're looking to invest in metals and mining stocks, here's a trio of companies in the industry you should be watching now.

Metals and mining stocks took a beating during the long commodity downturn and then had a huge rally last year. What's the outlook now for companies such as Rio Tinto plc ( RIO -4.37% ), Teck Resources Ltd. ( TECK -2.98% ), and Royal Gold Inc. ( RGLD -0.24% )? This trio of top industry picks all have fundamental strengths that should help drive their businesses forward no matter what happens to commodity prices.

Rio Tinto is one of the largest and most diversified miners in the world, though iron ore makes up the majority of its business, at 60% of underlying EBITDA last year. There are a couple of reasons to favor this giant over peers such as BHP Billiton ( BHP -5.46% ) and Vale SA ( VALE -2.00% ). First, BHP and Vale are 50/50 partners in the Samarco mine, where a late 2015 disaster destroyed two towns and took lives. The two companies face substantial legal issues that aren't over.  And even when a financial tally is quantified, the costs will linger for years. Rio is free of this uncertainty that could be costly. 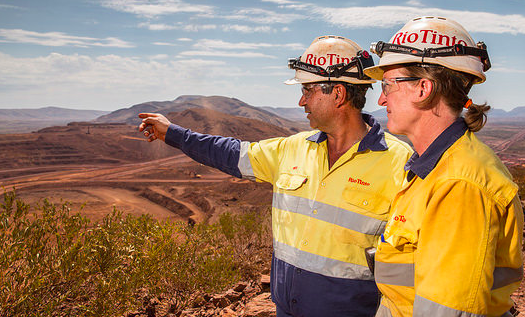 With that not-so-minor issue dealt with, Rio has new mines coming online over the next few years that should help drive performance. Late this year a new iron ore mine in Australia should begin producing. Then in the first half of 2019, a bauxite mine in Australia is expected to begin operations. And in 2020 a copper mine in Mongolia should ship its first ore. All of these mines should help the company grow volumes. At the same time, Rio is working on making its business increasingly efficient, expecting such efforts to generate an additional $5 billion in free cash flow by the end of 2021.

With a history of returning value to shareholders, including the decision to increase the dividend and buy back stock after commodity prices picked up last year, the future looks stable for Rio on a fundamental basis.

Next up is Teck Resources. The company's core businesses today are metallurgical coal (45% of 2016 revenues), copper (22%), and zinc (33%). All three have seen a rebound in pricing, with a fair amount of volatility thrown in the mix. But the bigger story for this miner is an expansion into a new commodity. 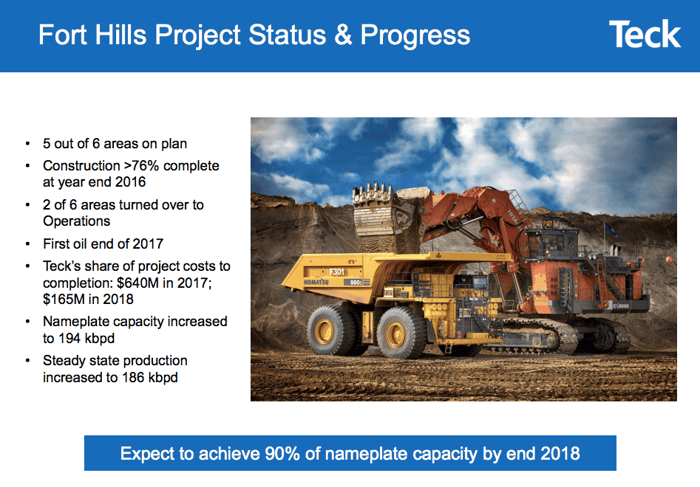 Teck owns 20% of the Fort Hills Oil Sands project, which has an impressive 50-year reserve life. When commodity prices were hitting their lows, there were legitimate concerns that Teck wouldn't be able to cover its share of development costs. However, after trimming debt by 15% in just five quarters, the company looks more than capable of handling the remaining costs. In fact, the miner has well over $1 billion in cash on hand and a $3 billion undrawn credit facility.

Teck's remaining obligation for Fort Hills, meanwhile, is $640 million this year and $165 million in 2018. That shouldn't be a problem. With first oil expected late in 2017 and a yearlong ramp-up to full capacity, this new asset should be providing a significant revenue stream by the end of 2018. That will diversify Teck into a fourth commodity and finally provide a return on its investment in Fort Hills. When the oil begins to flow, Teck a will be a much more attractive business on a fundamental level, and it should see a top- and bottom-line benefit as well.

We paid for that already

Royal Gold isn't a miner; it's a royalty and streaming company. That means it gives precious-metals miners cash up front for the right to buy gold and silver at reduced rates in the future. It's a valuable funding alternative for miners. During the commodity downturn, Royal Gold was able to ink deals with giant, struggling miners. Those royalty agreements helped push the company's volume up by a massive 36% in fiscal 2016. Add in rebounding gold and silver prices, and revenues hit records, too.

But the big miners are finally getting back on their feet, which means giant deals with an immediate impact on volume are less likely to happen over the near term. Thus, Royal Gold will have to rely on development projects for growth. Luckily, it's invested in a few of those and expects volume growth to continue through 2019, just at a slower pace than seen in fiscal 2016. 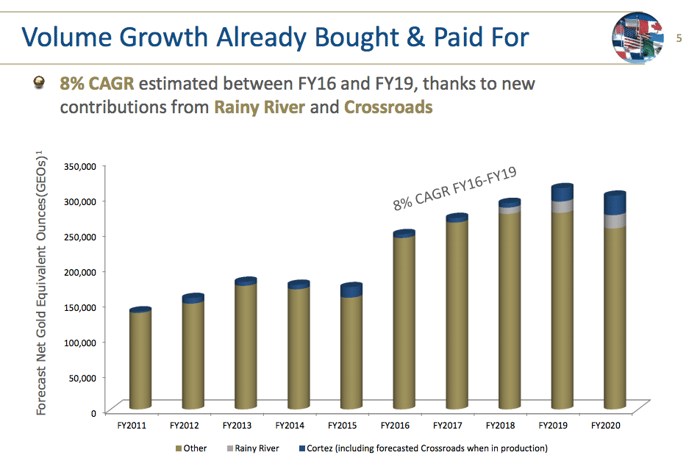 The best part, however, is that these investments have already been made and require no new funding. So unless something goes wrong, growth is baked in the cake, which should help Royal Gold continue its 16-year string of annual dividend increases.

Commodity prices make big headlines for a good reason: They have an enormous impact on the top and bottom lines of miners. However, there's more to these companies than the price of what they mine, which is why you need to dig a little deeper to see the positive underpinnings at metals and mining companies such as Rio Tinto, Teck, and Royal Gold. This trio is getting better on a fundamental basis, regardless of commodity price volatility, which is why they are top buys in 2017.