Please ensure Javascript is enabled for purposes of website accessibility
Log In Help Join The Motley Fool
Free Article Join Over 1 Million Premium Members And Get More In-Depth Stock Guidance and Research
By Reuben Gregg Brewer - Mar 28, 2017 at 10:35AM

Aluminum industry giant Alcoa appears to have relatively modest debt, but a little analysis shows that it owes more than you may realize.

If you look at Alcoa Corp's (AA) bond debt, the company appears well capitalized. And yet when pressed on returning value to investors via a dividend, the aluminum industry giant says it doesn't have plans to pay a dividend right now. In fact, one of its goals in 2017 is to strengthen the balance sheet. In the end, the problem isn't bonds; what's holding Alcoa back from paying a dividend is a different kind of long-term obligation. Here's what you need to watch.

In late 2016, "old" Alcoa split into specialty parts maker Arconic Inc (HWM 4.82%) and the aluminum-focused company we know as Alcoa today. One of the goals was to set Alcoa up with a solid financial foundation. And if you take a look at the company's debts, it seems like it accomplished that goal. 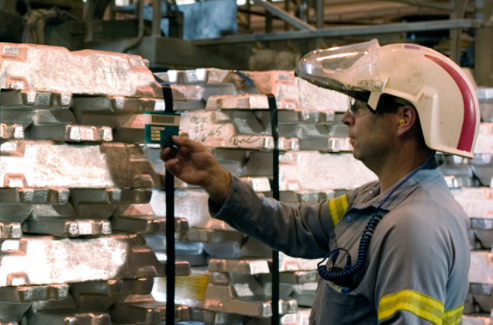 For example, Alcoa started 2017 off with long-term debt of roughly $1.4 billion and shareholder equity of $5.6 billion. Debt is about 20% of the capital structure. Add in around $2 billion in non-controlling interests, and debt to equity goes down to 15%. Those are both reasonable numbers for a company in a commodity business.

In fact, Alcoa rightly highlights its financial strength. As you can see in the slide blow, It has robust metrics for debt to capital, net debt to EBITDA and days working capital. Then there's the current ratio of 1.1, meaning the company could pay all of its near-term bills in a worst-case scenario (and then some) thanks to its cash pile of around $850 million. It does look like Alcoa is starting life on solid ground.

But despite what looks like a low level of debt, the company doesn't pay a dividend and, at this point, isn't hinting at any plans to start. The reason for that stance is a different long-term obligation.

Right next to long-term debt on the balance sheet are two other items: accrued pension benefits and accrued other post-retirement benefits. These are, essentially, financial promises that Alcoa made to current and former employees. Retirement accounting is pretty complicated stuff when you get into the nitty-gritty, but when you step back the big picture is pretty simple: Alcoa is eventually going to have to come up with money to pay these line items. 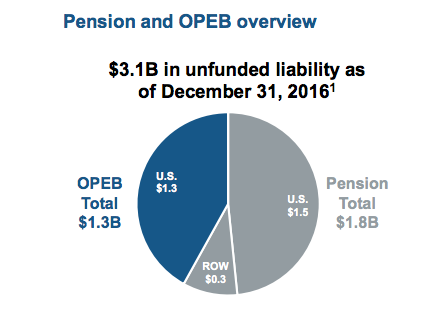 If you considered these two line items along with long-term debt, the company's what we can call "obligations-to-equity" ratio would be nearly 45% excluding non-controlling interests, and 35% (or so) if we add non-controlling interests to the equation. To be fair, neither of those figures are necessarily scary. But they paint a very different view of the balance sheet, especially for a company that operates in a commodity industry that often suffers through periods of volatile price swings. Simply put, Alcoa's balance sheet isn't as strong as the debt-to-equity ratio alone suggests.

Keep an eye on Alcoa's pension

The takeaway here is that you can't look just at Alcoa's outstanding bonds when assessing its financial condition because the company has material retirement obligations on which it is going to have to make good. In fact, now that its debt is at a reasonable level, Alcoa has to start addressing pension and post-retirement benefit costs. And it's increasingly important that you look at those, too.