As General Motors packs its bags and bails on Europe, where it hasn't turned a profit this century, Ford's CFO made it clear the automaker wants to remain in the market.

Investors who have followed the auto industry for years now likely understand General Motors' ( GM 0.93% ) recent decision to exit the European market entirely. GM hadn't turned a profit there since 1998 and had lost over $20 billion in the time since -- a brutal amount of cash to lose from the bottom line. By contrast, Ford Motor Company ( F 2.78% ) has decided to take the long road and stick it out in Europe, despite the implication of setbacks due to Brexit. Ford's CFO, Bob Shanks, offered a little more clarity on the subject during Thursday's "Let's Chat" presentation. Here are some details.

Shanks had this to say on the subject of Europe:

I wanted to put a few things in on Europe, particularly given what General Motors and PSA announced, very simply. So our view about Europe is, it is a place that we want to be. The transformation plan that we announced back in 2012 has been effective. 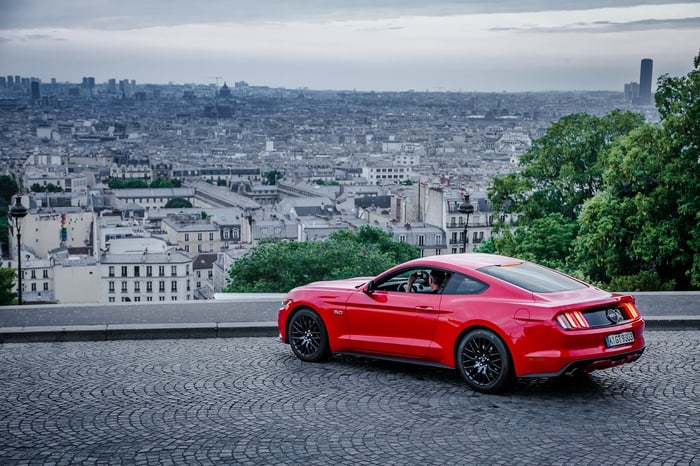 The plan was a three-pronged approach that focused on product, brand, and cost. Ford has launched 35 new products in Europe since 2013, which included more emphasis on performance, utilities, and high-end trim versions of vehicles to help boost profitability. It moved production of new vehicles to global platforms in order to cut costs, and also turned its commercial business -- think large vans for small businesses, among others -- from No. 7 in market share to No. 1 between 2012 and 2016. Instead of exiting a difficult market, Ford also chose to restructure in Russia and to localize there with the Ford Sollers joint venture.

Shanks was absolutely correct in saying the transformation has been effective. In 2012 Ford doubled down on improving its volume operations in Europe, and the region is again an emerging pillar of bottom-line growth outside North America -- just look at the results.

At a time when Ford's closest competitor, General Motors, has decided to cut losses in Europe and focus on more lucrative near-term markets, the folks at the Blue Oval have different plans. The automaker will double down on improving small-vehicle profitability, such as the Ka Plus, the new EcoSport in Romania, and an "all-new upscale Fiest"; the Fiesta in particular sells extremely well in Europe, and an upscale version could be a big winner.

Ford also hopes it can improve margins with an increased focus on utility vehicles such as the new Kuga (Escape) and Edge. It's not going to be easy, but Ford also needs to continue to create cost efficiencies and adjust to the decline in diesel demand and increase in electric-vehicle demand.

All that said, what investors need to keep in mind is that Ford's operations in Europe won't build on last year's record $1.2 billion profit. That's because of the aforementioned Brexit, which is going to cost Ford an estimated $600 million this year due to the change in currency values. Furthermore, investors need to realize that Ford was fully hedged for the first quarter of 2017, so expect relatively normal results next month during the earnings presentation, and then expect Europe's profitability to take a hit.

With Ford, investors understand that they're going to get a long-term-focused company that will wait for markets to bear fruit down the road, while GM has made clear it's focusing on improving results in the near term. Ford has checked off multiple boxes since the Great Recession, including achieving record profitability in North America, turning a profit in Europe, and drastically increasing its presence in China. During the next decade, the company will focus on smart-mobility projects in hopes of generating new revenue streams, with a push toward electric vehicles and driverless vehicles. One day, if long-term investors are patient, Wall Street will reward the company with a better multiple. It's a shame that didn't materialize after the prior decade of smart moves.