Lions Gate Entertainment's (NYSE: LGF-A) big screen reboot of the popular children's television property Power Rangers is off to a solid start. The picture bowed to $40.5 million in its domestic opening weekend -- outperforming tracking estimates suggesting that the picture would open to $36 million, and leaving the door open for future installments. As of this writing, shares of the company had gained nearly 10% following the movie's release.

With aspirations of turning Power Rangers into a massive film franchise, and Lions Gate in need of hit new entertainment properties, the extent to which the property has staying power will be important for the company. 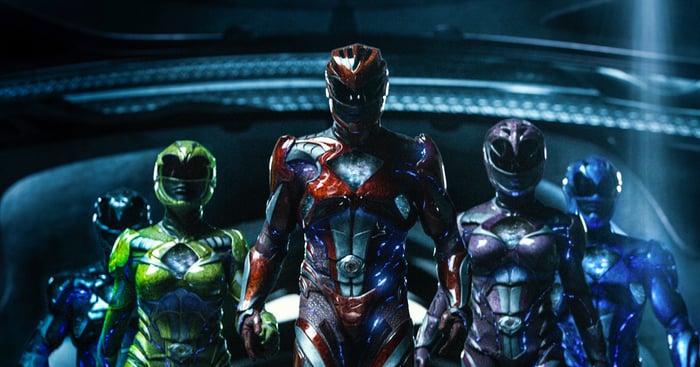 Has Power Rangers relaunched a franchise?

Power Rangers' $40.5 million domestic opening isn't a bad start, but the picture isn't a huge hit either. The movie grabbed an additional $19 million from foreign markets over its first weekend, and has yet to debut in territories including France, South Korea, and Japan. The roughly $60 million global opening puts the film in position to recoup its roughly $100 million production budget and additional marketing expenses, but the performance doesn't make a clear case that Lions Gate has laid the foundation for a huge new franchise.

Critical and audience receptions for the picture support the notion of a mixed outlook for the property, with 47% of critics on RottenTomatoes.com giving the picture a favorable review, while moviegoers had a warmer response. Surveys from CinemaScore indicate that Power Rangers was well-liked by its mostly millennial audience, so word of mouth may help the picture over the rest of its run.

Lions Gate has plans to produce at least five sequels in the property, and while the extent of Power Rangers' staying power at the box office will have some effect on the franchise's future, it seems likely that the company will move ahead with production on the first of these installments. The recently released franchise reboot can't be counted as a breakout hit, but it's performing well enough for the franchise-hungry Lions Gate to see if it can build a bigger audience with future iterations.

Morphin' beyond the multiplex

The merchandise-friendly nature of the Power Rangers franchise makes it an obvious fit for Lions Gate's consumer-products division, and the property can be counted on to factor into other budding initiatives at the company as well.

Power Rangers looks to be an important asset in the studio's push into game development: A mobile title built to tie in with the big film release launched as the fifth-highest-grossing game the week of its release, indicating the property has cross-medium appeal. Lions Gate is building up its game division, and recognizable franchises are often needed to stand out in the crowded mobile marketplace, so future releases built around the property are probably in the works.

Lions Gate is also expanding the reach of its entertainment franchises at theme parks and other location-based venues. A theme park that incorporates the company's film properties recently opened in Dubai, and Lionsgate Entertainment World is scheduled to open in China in late 2018. The company is also working to develop 20 branded leisure centers at malls and shopping plazas around the world, incorporating Lions Gate's key properties.

If the franchise has staying power, Power Rangers would seemingly be a good fit for these kinds of emerging business opportunities.

What's next for Lions Gate at the movies?

Following the success of young-adult properties Twilight and The Hunger Games, Lions Gate has been struggling to find its next big film series. The company aligns its model more around the production of mid-budget pictures than major studio rivals like Walt Disney and Time Warner, and the recent merger with premium television channel Starz has done a great deal to diversify its overall business. But big success in the movie industry still hinges on hit franchises.

Lions Gate is relaunching its Saw horror franchise later this year; it also aims to launch a franchise from a modern reboot of the Robin Hood story, with an origin story planned for March 2018. Further down the line, the company's next big franchise opportunity looks to be The Kingkiller Chronicle, a property adapted from a popular book series. Films, a television series, and video games built around the Kingkiller property are currently in the works.

Power Rangers isn't showing signs of being the next hit on the level of The Hunger Games, but the potential to build on the franchise is there, and that's good news for Lions Gate and its investors.