Silver Wheaton Corp. (NYSE:WPM) was able to grow its business at a time when gold and silver miners were struggling through a commodity downturn. With precious-metals prices on the mend, however, the opportunities for big streaming deals aren't as good. And that means it's time for investors to watch Silver Wheaton's production trends a little more closely.

Silver Wheaton is a streaming company and has a unique business model in the precious-metals space. It essentially gives money up front to miners, in exchange for the right to buy silver and gold at reduced prices in the future. To put some numbers on that: It pays around $4 an ounce for silver (about 60% of revenues) and $400 an ounce for gold (about 40% of revenues) -- well below the current spot price for each of these precious metals. 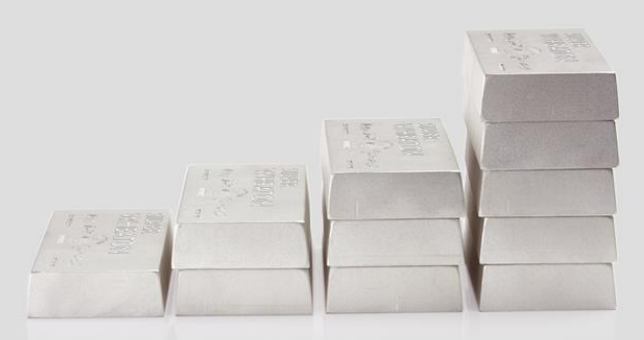 The question that should quickly come to mind is: Why would a miner want to sell gold or silver so cheaply? When a miner signs a deal with Silver Wheaton it needs the cash when other options -- like selling stock, issuing bonds, or going to a bank -- are less desirable. That's why the commodity downturn was so good for Silver Wheaton; big companies with operating mines were struggling financially and desperate for cash that few wanted to provide. Silver Wheaton stepped into the void.

For example, in 2015 Silver Wheaton was able to ink two $900 million deals, one with Vale SA (NYSE:VALE) and another with Glencore, two of the largest miners in the world. The terms of the Vale deal were for Silver Wheaton to buy gold from the Salobo mine at the lesser of $400 an ounce or the going spot price -- a really good deal for the streaming company. Vale, meanwhile, used the cash to fund development plans for its giant S11D iron-ore mine, and to pay down debt: a win-win. In fact, Vale came back for more in 2016, letting Silver Wheaton make another $800 million streaming deal at the same mine.

Deals like this allowed Silver Wheaton to opportunistically expand its business during the downturn: Silver-equivalent production increased 37% between 2014 and 2015, and jumped another 15% in 2016. With precious-metals prices on the rebound, however, investors shouldn't count on more big deals like that. Silver Wheaton's production outlook is relatively flat through 2020 -- from the operating mines in its portfolio.

To be fair, even if production doesn't expand, a precious-metals rally could still boost the company's top and bottom lines. But real growth in the business will need to show up in the production numbers. And that's why now is the time to keep a close eye on production growth. You see, another reason why miners sign streaming deals is to pay for early-stage development and expansion projects. Silver Wheaton has a number of these deals on the books, but the projects aren't up and running yet.

The problem is that these investments take longer to bring on line and their outcomes are far less certain than investing in a mine that's already operational. But they're where Silver Wheaton's growth is going to come from in the next few years. That said, there's a huge opportunity, with more than 10,000 silver-equivalent ounces of "optionality," as Silver Wheaton calls it, built into its portfolio: 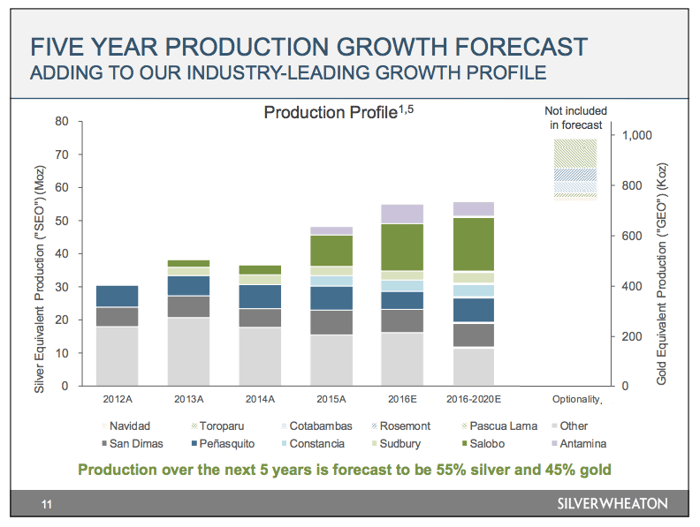 It's Silver Wheaton's production growth that will tell you if it made the right investments or not. For example, Silver Wheaton has invested in Barrick Gold’s (NYSE:GOLD) Pascua-Lama mine, a development project that has been mired in political and environmental drama for years. Although the opportunity at Pascua-Lama is huge, it may never live up to its potential. But if it does, it could provide a huge boost to the company's production numbers.

A different part of the cycle

Silver Wheaton did a great job of expanding its business while the opportunity was there during the commodity downturn. But now it looks like we're heading into a different phase of the typical boom-and-bust cycle for miners. You should definitely pay attention to the company's financial results, but don't overlook production growth; that will tell you how well Silver Wheaton is doing, now that miners are no longer as desperate for cash. If the "optionality" in its portfolio doesn't turn into physical production, then Silver Wheaton's future won't be as bright as its recent past.