Chip giant Intel (NASDAQ:INTC) finally went into quite a lot of technical detail about its upcoming 10-nanometer chip manufacturing technology. I applaud the company for disclosing this information publicly, I appreciate that it took the time to put it into context for investors, and I genuinely hope that it continues to keep investors abreast of its progress in chip manufacturing technology.

Despite some of the impressive work that Intel did to deliver a significant reduction in transistor area with its 10-nanometer technology relative to its prior-generation 14-nanometer technology, there are a couple of things about the technology -- at least in its initial form -- that were quite disappointing.

The first problem -- one that I mentioned in the article I linked to above -- is that the first version of Intel's 10-nanometer technology won't deliver as much performance as the 14-nanometer++ technology that the chipmaker is going to start shipping products based on in the second half of this year. 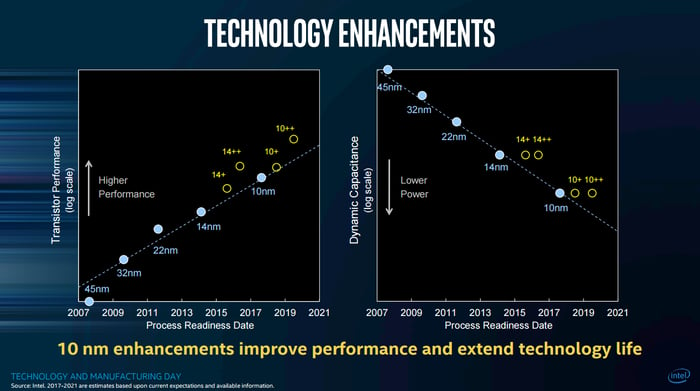 Furthermore, Intel says that the third iteration of its 10-nanometer technology, which is likely to go into mass production in the second half of 2019, should deliver a clear performance benefit over 14-nanometer++ while at the same time achieving much lower power consumption and much smaller chip area.

It's going to be about three years before Intel is fielding a 10-nanometer technology that clearly beats out the 14-nanometer++ technology that it will begin shipping to customers later this year, and that's just disappointing.

Intel has spent a great deal of time in its public messaging talking about how its 10-nanometer technology is superior to the 10-nanometer technologies that its main competitors -- Samsung (NASDAQOTH: SSNLF) and Taiwan Semiconductor Manufacturing Company (NYSE:TSM) are currently producing.

What the public needs to keep in mind, though, is that Intel said that it doesn't plan to start mass-producing chips on its first 10-nanometer variant until the second half of 2017. Moreover, Intel executive Murthy Renduchintala indicated that Intel won't start shipping these production 10-nanometer chips until the very end of 2017 or the very beginning of 2018.

I don't want to be too harsh on Intel for opening about key technical aspects of its technology, but at the same time I think the evidence is clear that the company's 10-nanometer technology development has not been smooth and that there are still plenty of issues to work out in the coming years.

What I'd like to see from Intel going forward is a tightening up of its execution in chip manufacturing technology development. If I were Intel CEO Brian Krzanich and the company's Board of Directors, I would give Intel's Technology and Manufacturing Group (TMG) whatever resources it needs to be able to speed up and smoothen the development of 7-nanometer, 5-nanometer, and beyond.

In the near term, this could mean an increase -- perhaps even a substantial one -- in terms of research and development spending, which would reduce near- to medium-term profitability. However, I would urge Intel's management and board of directors to think about the long term, rather than on trying to maximize short-term profitability.