Please ensure Javascript is enabled for purposes of website accessibility
Log In Help Join The Motley Fool
Free Article Join Over 1 Million Premium Members And Get More In-Depth Stock Guidance and Research
By Frank DiPietro - Mar 31, 2017 at 9:37AM

Rumors of an acquisition have died down, and the company's plan for growth may provide clues as to the full potential of its business.

The latest talks of a tie-up between Pandora Media (P) and Sirius XM Holdings (SIRI 1.30%) have cooled based on comments from Liberty CEO Greg Maffei, who is also chairman of Sirius XM. Speaking to an audience at the Deutsche Bank Media, Internet & Telecom Conference on the night of March 6, Maffei said:

The problem is we think the stock is overvalued. We will not pay what it is at the current market price. So, I think it's very unlikely we're going to end up buying it.

Pandora stock fell more than 6% the following day as investors abandoned the idea that a deal was close at hand. Shares have generally remained at this depressed level since then. 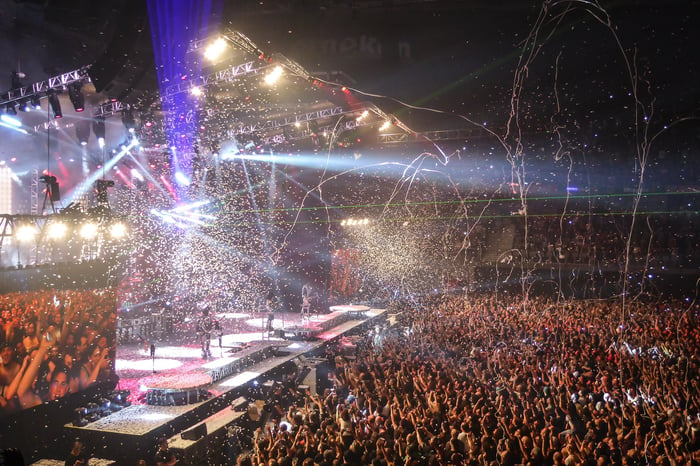 What about Corvex and Pandora's recent SEC filing?

To make matters more interesting, activist hedge fund Corvex Management maintained its ownership of 8.8% of Pandora shares during the month of February. Based on a recent SEC filing by Pandora, it appears Corvex is pressing for changes to the company board.

Corvex has been advocating a sale of Pandora since last spring when it first began buying shares. One way activist investors attempt to influence a company's actions is to buy enough shares to demand seats on the board. On March 16, Pandora announced it had pushed its date to nominate potential new directors out by two weeks to March 31, likely in response to Corvex's desire to propose new board members in what could be a developing proxy fight.

With all this saber-rattling and jostling for control, it's easy to forget about the actual business and what Pandora management is trying to achieve.

The company has been on a mission to offer a full product suite to customers. The lineup includes the ad-supported free service; a $4.99 upgraded service without ads called Pandora Plus; a $9.99 full on-demand music service released earlier this month; and Pandora's ticketing service, Ticketfly.

Last October, Pandora management presented its growth plans and estimated that revenue would be $4 billion by 2020. By comparison, the company generated revenue of just $1.36 billion in 2016. 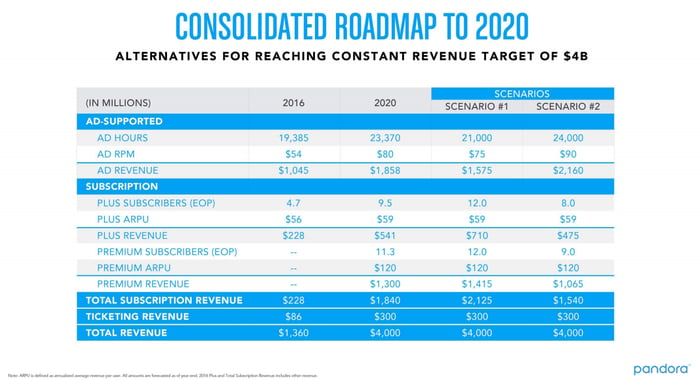 Over the next three to four years, the company targets a blended gross margin across its various product lines of 42% and an operating margin of 15%, which amounts to $600 million of profit before interest and taxes, assuming management meets its targets. That would be a major reversal from Pandora's $343 million loss in 2016.

What is the company worth?

Today Pandora has a market cap of $2.8 billion and revenue of $1.38 billion, meaning the company trades at two times sales. If management is able to deliver on its promise and deliver $4 billion of revenue by 2020, we can generate a basic prediction that the company will be worth $8 billion by that time.

The table below compares the price-to-sales ratio between Pandora and Sirius XM:

Looking at the competition, we can also look at Spotify. The privately held on-demand music-streaming service has 50 million paying subscribers as well as an ad-supported business. Based on the latest reports, the company could sport a valuation as high as $8.5 billion.

We will have to wait until Spotify enters the IPO process to accurately compare it to Pandora, but that may not happen until 2018.

What is a shareholder to do?

Today, Pandora sports an enterprise value of $2.86 billion (essentially market capitalization plus debt less cash), which is close to the calculation we made earlier valuing the company at two times sales. Sirius management is trying to insist that the company is not even worth that much (likely as part of the negotiation process).

If a shareholder looks at the potential for Pandora to make money in the future, they may fall more in the camp of Corvex's Keith Meister, who believes the company is undervalued at today's stock price. If the company executes its plan, it will be a profitable business in 2020. With a 15% operating margin on $4 billion of revenue, $600 million of operating profit would be quite the feat for a company that has reported losses for every year as a public company.

In all cases, there is a fundamental challenge to the on-demand music streaming business, which is the cost of the content. Both Spotify and Pandora have to pay the artists and music labels each time an on-demand subscriber plays a song. Pandora estimates this cost at 63% of subscriber revenue, while Spotify is paying out nearly 70% of revenue for music-licensing contracts. This may ultimately put a cap on the ability of all businesses in this space to be successful.

For the time being, my plan is to simply do nothing and hold my shares. If Pandora management successfully executes its long-term vision, the company will finally find itself in the black. There is also the possibility that activist fund Corvex will push for a tie-up with another company. In any case, 2017 should be an interesting year to follow Pandora, and I'll be along for the ride.