The holiday season is a critical time for retailers, and yoga specialist Lululemon Athletica (NASDAQ:LULU) has worked hard to restore its reputation and get shoppers back into its stores. Coming into Wednesday's fiscal fourth-quarter financial report, Lululemon investors wanted to see the yoga apparel retailer continue its recent string of successes. Instead, the company said that it expects sluggish sales during the current quarter, and that sent shareholders panicking.

Let's look more closely at Lululemon to see what happened and why many appear worried about the company's future. 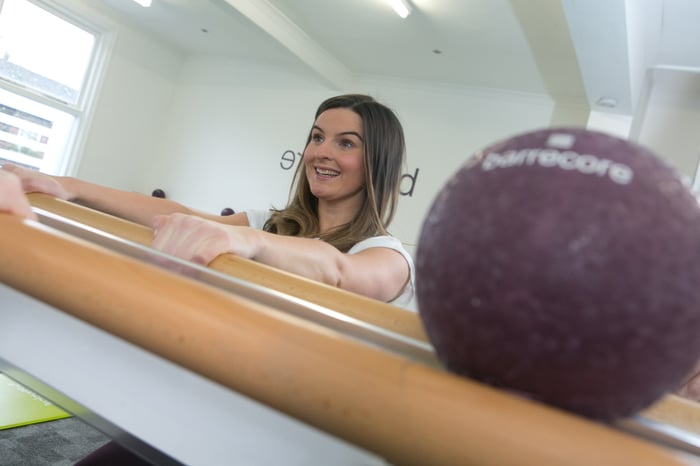 How Lululemon fared during the holidays

Lululemon's fiscal fourth-quarter results were mixed in the eyes of most of those following the stock. Revenue was up 12% to $789.9 million, which was slightly better than the roughly $785 million consensus forecast among investors. Net income climbed 16% to $136.1 million, but the resulting $0.99 per share in earnings fell short of the $1.01 per share that shareholders had wanted to see.

Lululemon continued to see favorable moves in its margin figures. Gross margin was up nearly 4 percentage points to 54.2%, and operating margin climbed by more than a full percentage point to approach 25%. As we've seen in past quarters, higher taxes hurt profits, but the figures still show a commitment to maximizing operational efficiency in an effort to boost the bottom line.

CEO Laurent Potdevin put a positive spin on the way that Lululemon finished the year. "2016 marks a milestone year," Potdevin said, "where our successful execution against long-term strategies returned the company to positive operating income growth for the first time in three years." He also stated his belief that the company has restored its strong brand identity.

Why is Lululemon Athletica slowing down?

However, Lululemon expressed concern about the way that 2017 has begun for the retailer. In Potdevin's words, "Although we've had a slow start to 2017, our teams are passionately committed to delivering on our robust plans across product innovation, digital, North America, and international as we realize our ambitious vision for the future."

During the conference call following the report, Lululemon explained that the company had failed to deliver a spring apparel collection that was in line with the stylistic demands of its customers. In particular, executives cited "an assortment lacking color" that failed to inspire shoppers to make purchases. Given the rising level of competition, missteps like these can have dire consequences.

What investors focused on was the extent of the slowdown to begin the new fiscal year and its impact on the future. Lululemon said that it now expects revenue of between $510 million and $515 million for the fiscal first quarter, with earnings of just $0.25 to $0.27 per share. Both figures were well below what most investors were expecting to see from the yoga retailer. Similarly, full-year fiscal 2017 guidance was also disappointing, including sales of $2.55 billion to $2.6 billion and earnings of $2.26 to $2.36 per share. The full-year bottom-line estimate was roughly 10% lower than investors had expected coming into the report, and those who follow Lululemon quickly cut their growth expectations for fiscal 2018 as well.

Lululemon investors weren't very unhappy with how the company did, and the stock plunged 23% on Thursday following the announcement. Without better results in the near future, Lululemon will struggle to regain the positive momentum that it spent most of fiscal 2016 generating.