But for four drugmakers, April brings big news that could be catalysts for their stocks. Here's what's coming up this month for Neurocrine Biosciences (NASDAQ:NBIX), Incyte (NASDAQ:INCY), Eli Lilly (NYSE:LLY), and BioMarin Pharmaceutical (NASDAQ:BMRN). 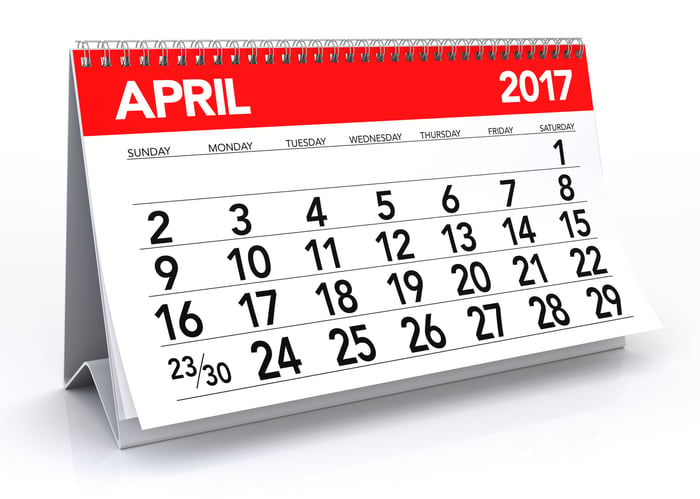 Will the first time be the charm for Neurocrine?

Neurocrine Biosciences doesn't have an approved product yet. That could change within a matter of days. The U.S. Food and Drug Administration (FDA) is scheduled to make its decision on whether to approve Ingrezza for treating tardive dyskinesia by April 11.

The timeline for Ingrezza is accelerated because the experimental drug received the FDA's priority review designation. This designation was granted because tardive dyskinesia, a disorder in which individuals have involuntary, repetitive movements of the face, trunk, or extremities, has no approved FDA treatment.

Neurocrine experienced a disappointment with Ingrezza earlier this year when the drug failed to meet the primary endpoint in a phase 2 clinical study targeting adults with Tourette syndrome. The biotech has another phase 2 study under way evaluating Ingrezza in treating pediatric Tourette syndrome.

More waiting for Lilly and Incyte

Lilly and Incyte had hoped to already know the fate for experimental rheumatoid arthritis drug baricitinib. The FDA was originally scheduled to make its decision in January 2017. However, that date was pushed back by three months to give the agency additional time to review more data. The FDA should announce the verdict for baricitinib by April 14.

BioMarin looking for product No. 6

BioMarin already has five approved drugs on the market for treating rare diseases. The biotech hopes to soon add another drug for treating another rare disease. The FDA is scheduled to announce its decision for Brineura in treating CLN2 disease by April 27.

CLN2 disease is a form of Batten disease. Symptoms typically show up in children between the ages of 2 and 4, and include language delay and seizures, followed by movement disorders, motor deterioration, dementia, and blindness. Most patients die between the ages of 10 and 16. There is no approved treatment for CLN2 disease currently.

Late-stage study results showed significant improvement in the rate of clinical decline for children receiving Brineura. Even incremental improvement can mean the difference between children being able to walk and talk -- or not. It's impossible to know for sure what the FDA will do, but I expect there would be a firestorm from Batten disease patient advocates if the agency doesn't approve Brineura.

Approval for baricitinib would be welcomed by Lilly's and Incyte's shareholders. I wouldn't expect to see tremendous jumps in either stock, though. BioMarin's share price would likely get a nice bump if Brineura wins approval, though.

But the biggest boost of all would probably go to Neurocrine if Ingrezza wins approval. The transition from clinical-stage biotech to a company in position to actually generate product sales is huge. If April brings good news from the FDA, it could also bring sizable returns for Neurocrine investors.