Shares of footwear company Skechers (NYSE:SKX) are still well below their all-time high, set in mid-2015 at a time when the company's revenue was growing at a 30% to 40% annual rate. That rate has since slowed way down, making the company's growth story far less enticing and bringing the stock price back to earth. Skechers stock fell from a little over $50 per share in August 2015 to a little under $20 per share in October 2016.

However, since the stock bottomed out in October, it has soared nearly 50%, rewarding bargain-hunters like myself for betting on the company at its lowest point. Skechers' results since then haven't been quite as bad as analysts feared, and its guidance for the first quarter was more optimistic than expected. 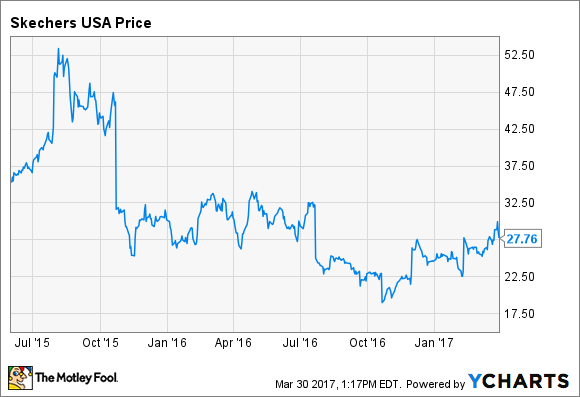 After that huge gain over the past five months, does Skechers stock still have room to run? While the growth story isn't as exciting as it was a few years ago, Skechers still has plenty of growth potential in international markets. Add in a reasonable valuation and a rock-solid balance sheet, and you have the ingredients necessary for continued gains.

Overall, Skechers' fourth-quarter report was underwhelming. Revenue grew by just 5.8% year over year, and earnings slumped due to higher costs. This poor performance could be traced in part to its domestic wholesale business, which suffered an 11.8% decline in sales. 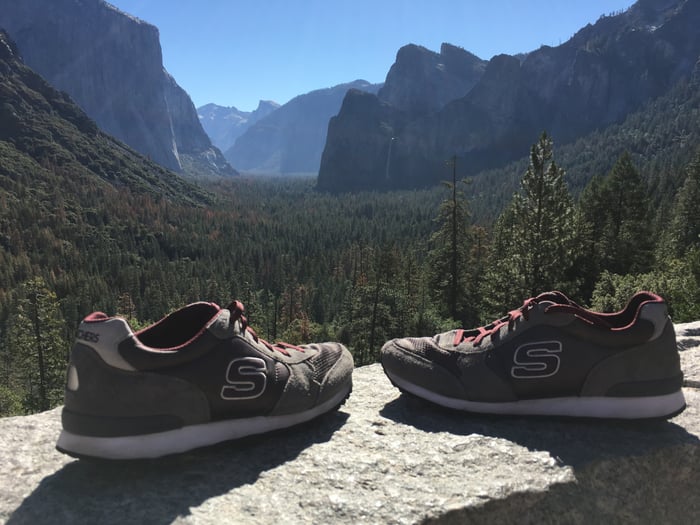 Skechers expects to grow total sales by about 8% year over year during the first quarter, with growth in the international business counteracting a flat domestic wholesale business. That's a far cry from the blockbuster growth rates of a few years ago, but it's also far from a disaster. The days of explosive growth are likely over, but that doesn't mean that the growth story is dead.

Even after rising nearly 50% in five months, the stock still isn't all that expensive, especially considering its growth potential. Skechers produced $1.57 in earnings per share during 2016, and analysts are expecting $1.77 per share in 2017. That puts the stock at around 16 times forward earnings.

With the S&P 500 sporting a P/E ratio in the mid-20s, Skechers looks like a pretty good deal. The stock is made even more attractive by Skechers cash-rich balance sheet. At the end of 2016, Skechers had $718.5 million in cash and cash equivalents and about $75 million of debt. Skechers doesn't yet buy back shares or pay a dividend, but it has plenty of cash to do so.

Things could still go wrong for Skechers, too, so further stock price appreciation is far from guaranteed. The stock received a two-notch downgrade from Susquehanna in late March due to channel checks indicating sell-through weakness. The opinion of a single analyst isn't something to worry about, but if Skechers' domestic wholesale business does worse than expected in the coming quarters, the stock could certainly give up some of its recent gains.

In an expensive market, Skechers offers a solid combination of growth and value. It's not the cheapest stock in the world, especially after running up nearly 50%. But if the company can keep growing its international business, it could be worth quite a bit more a few years down the road.