The used car retailer has struggled to deliver meaningful growth lately, but it has new initiatives that could turn this around.

Selling used cars has been good for Carmax (KMX 2.42%) over the years, but lately, growth has been harder to come by. The main culprit has been a greater supply of late-model used cars hitting the market, causing used car prices to decline on top of moderating store traffic.

Despite the overhang, there were some positives in the company's last earnings report that pointed to a possible rebound on the horizon. When Carmax reports its fiscal fourth-quarter earnings on April 6th, we'll find out whether the company has hit a plateau, or if more improvement is coming. 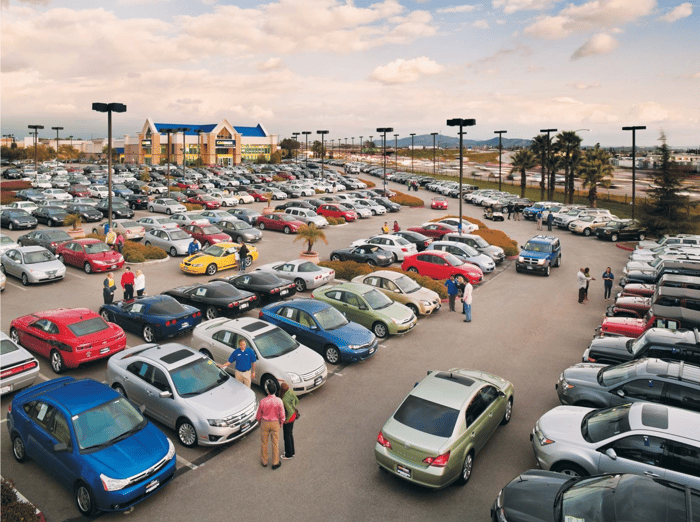 Carmax has struggled with an oversupply of used vehicles. IMAGE SOURCE: CARMAX INC.

In the last quarter, used unit sales growth in stores open more than a year were driven by improved conversion rates and a small increase in store traffic, which was an improvement from previous quarters. A further strengthening in store traffic in the fiscal fourth quarter would be a great sign for investors as Carmax generally sees its best results during the spring and summer months.

Many brick-and-mortar retail stores have struggled lately with lower traffic. It's typical in today's environment to find a retailer reporting sluggish in-store performance but outstanding growth in its online/mobile business. Customers across the retail spectrum are clearly migrating to online or mobile shopping.

Creating a seamless experience between online and in-store shopping is important for Carmax to succeed as competition heats up. Carmax has been building out its website capabilities to make it easier for customers to find and research the car they want. The ongoing development with its mobile app was part of the reason for the improvement in used unit comparable-store growth in the last quarter, and it could be a trigger for better growth in the coming quarters.

Carmax has been testing a new feature on its website that gives customers the ability to find out if they pre-qualify for a loan. The company launched this new feature nationwide in the fiscal third quarter, and so far, it has been delivering increased leads.

The company is also testing two important features that allow customers to do more from home without going to a Carmax store. Home delivery of purchased cars has a lot of potential to improve conversion rates as it gives customers more convenience. Another feature under development allows customers to submit vehicle information to receive an appraisal without going to a store.

These are all very promising features that Carmax needs to offer its customers in order to grow in the new digital age. It's part of the company's mission to allow customers to buy a car whenever and however they want.

As for used vehicle pricing, management noted an increase in cars for sale at auction during the last conference call, which also contributed to the company's improved used unit comparable sales performance:

I absolutely think that we are starting to see the supply come back in the auctions and I think that's a good thing for CarMax. As that supply comes back, it helps to drive the difference in price between a new car and a late model used car. -- Carmax CEO Bill Nash

Carmax acquires a significant amount of its inventory of used vehicles directly from customers, or through auctions. An increase of supply at auction allows Carmax to find better deals on cars it acquires and helps increase the price difference between a new and late model used car. A key benefit of this is that car buyers have an added incentive to buy used over new, bringing more traffic to Carmax stores. It also gives Carmax the opportunity to acquire good deals on used vehicles, savings that are passed on to the customer.

The fourth-quarter earnings conference call will also give investors more insight in how new CEO Bill Nash approaches the opportunity in front of Carmax. Previous CEO Tom Folliard retired in September 2016. A slightly different approach to the business could make a big difference in how the company performs in the future.