The offshore driller amended the terms of some of its credit facilities in light of the financial struggles of its parent company.

Offshore driller Seadrill Partners (SDLP) plunged on Tuesday, falling more than 12% by 3:00 p.m. EDT. Fueling that sell-off was an amendment to certain of its credit facilities. Also weighing on the company was news that its parent, Seadrill (SDRL), expects to file for bankruptcy, which sent that stock plunging even deeper.

Seadrill Partners announced today that Seadrill and its creditors have "agreed to extend a series of dates as part of Seadrill's ongoing restructuring efforts." First, they pushed the date to implement a restructuring plan from the last day of April to the final day of July. Further, related covenant amendments and waivers that were set to expire at the end of June now will not expire until the end of September, giving the company a bit more breathing room to work out a solution. 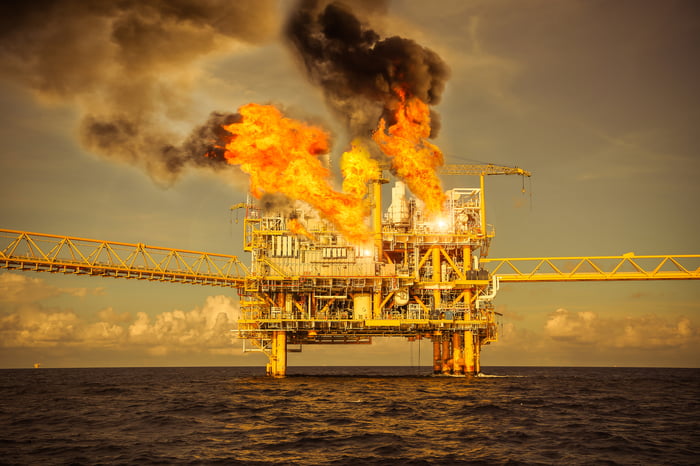 One solution it has proposed is to remove Seadrill as the guarantor under the related facilities and separating them so that each facility is secured only by Seadrill Partners assets and not Seadrill or its assets. That would insulate Seadrill Partners' debt from a default that might occur as a result of Seadrill's restructuring efforts.

Speaking of which, those efforts haven't gone as planned. As a result, Seadrill warned investors to prepare for total loss as it makes plans to potentially file for bankruptcy as the solution to restructure its debt. If the company goes that route, it could take Seadrill Partners down with it -- unless creditors agree to remove Seadrill as the guarantor on those credit facilities and extends the maturities out several years. That said, Seadrill Partners is preparing contingency plans just in case, which could include filing for bankruptcy.

The concern is growing that Seadrill Partners might get pulled under by its parent company. While it was able to buy some time to find a workable solution, its parent appears to have all but given up hope of finding a solution to save the company. Needless to say, it doesn't look good for either company right now, which is why investors shouldn't come anywhere near these stocks.