Please ensure Javascript is enabled for purposes of website accessibility
Log In Help Join The Motley Fool
Free Article Join Over 1 Million Premium Members And Get More In-Depth Stock Guidance and Research
By Reuben Gregg Brewer - Apr 4, 2017 at 11:07AM

Silver and gold Miner Hecla has a silver linked dividend, with precious metals off their lows is it time to start thinking about dividend hikes?

Silver and gold miner Hecla Mining Company (HL 4.37%) pays a quarterly dividend of $0.0025 per share. That's a thin penny a year, which is really just a token distribution. Investors get a yield of roughly 0.2%... Not much to write home about. However, Hecla has a unique dividend policy in the mining industry because it's tied to the price of silver, which might lead you to wonder about the outlook for a dividend hike in 2017 since silver prices have risen off their 2016 lows.

In late 2011, Hecla introduced a new dividend policy, linking its quarterly distribution to the miner's realized price for silver. There's two pieces to the dividend. First, the company pays a minimum dividend of a penny a share per year, that's $0.0025 a quarter. This is likely an attempt to appease large investors, like insurance companies and pensions, that are barred from buying stocks that don't pay a dividend. The yield this piece of the dividend generates is minimal at best. 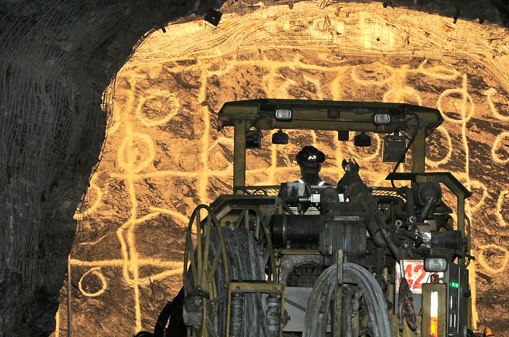 The second piece of the dividend puzzle is more interesting. The quarterly dividend leaps to a penny when the company's realized silver price hits $30 per ounce in the previous quarter. The disbursement goes up an additional penny for every $5 increase in the realized price of silver. When Hecla initiated the policy its realized price for silver was $40 per ounce, meaning that the quarterly dividend was $0.03 per share ($0.12 per year, assuming silver prices held at $40 per ounce). Of course the dividend goes down following the same path when realized silver prices fall.

This is roughly similar to the gold-linked dividend that Newmont Mining (NEM 2.10%) offers. Newmont, interestingly, recently revised its break points by increasing the dividend by as much as 100% at certain realized gold price levels. The big difference between the two dividend policies here, however, is the different metals to which they are tied. If you are a gold bug Newmont would be the better option, if you prefer silver then Hecla's silver-linked dividend would be the winner.

What about that hike?

What about the rest of the year? That, of course, will depend on the price of silver. But don't get your hopes up. Silver peaked at a little above $20 an ounce in the middle of 2016 and has been trending in the mid-to-high-teens lately. So silver prices would need to go up by around two thirds before a dividend increase is in the cards. 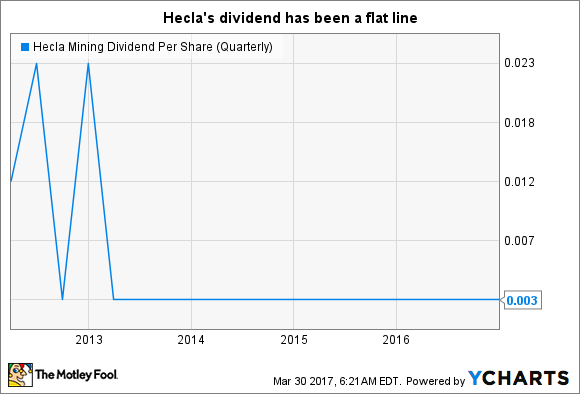 Here's the thing, though. Just because silver prices go up doesn't mean Hecla's average realized price over an entire quarter will be high enough to trigger an increase. A brief rally and swift pullback probably won't do it. Silver needs to go up and stay up. In other words, it's not likely that Hecla will increase its dividend this year unless there's a huge and sustained silver rally.

Keep it in mind, for the future

At the end of the day, Hecla's silver-linked dividend is an interesting policy, but it doesn't have a lot of impact on investors today. That doesn't mean you should ignore the possibility of dividend hikes in Hecla's future, only that a dividend hike in the near future isn't all that likely. Could it happen? Sure! But don't count on it.