Shares of Shake Shack (NYSE:SHAK) have been surprisingly steady in recent months. The stock has been trading in the $30s -- never falling below $30 or rising above $40 -- since last summer, an impressive feat in light of how volatile the stock was in its first year and a half as a public company. That may change if one Wall Street pro's latest update is correct, and unfortunately for bulls, it's more about the floor cracking than busting through the ceiling.

Goldman analyst Karen Holthouse is lowering her price target on Shake Shack stock, going from $34 to $30 on cannibalization fears. Her read of the situation is that new units are generating less buzz around their openings, and we already know that the locations outside of its New York City stronghold tend to generate lower sales volumes.

Holthouse was already bearish on Shake Shack stock, and she's obviously sticking to her sell rating. She is also lowering her estimates through the next three years by 4% to 9% between now and 2019. 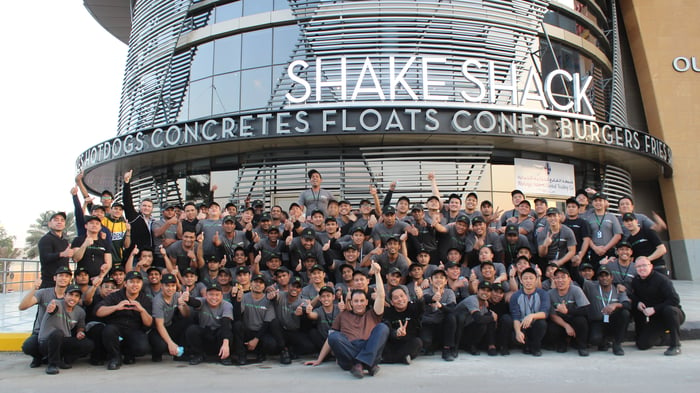 Holthouse slashing her price target comes just two weeks after another analyst went the other way. Nick Setyan at Wedbush upgraded the stock from underperform to neutral late last month, increasing his price target from $30 to $33. One can argue that there's symmetry in the seesaw dance. It's just a matter of someone new to sit on the $30 egg until it hatches. However, only one can be right.

Shake Shack's growth is slowing, and that's not a surprise as expansion continues off a larger base of restaurants. There are now 114 locations around the world. Store-level popularity is also decelerating, as comps during Shake Shack's latest quarter rose by a rather pedestrian 1.6%.

The restaurant operator is still growing faster than most concepts with more than 100 eateries. The midpoint of Shake Shack's own top-line guidance calls for 31% in growth for all of 2017. Adjusted earnings per share are also living up to their end of the bargain, rising from $0.32 in 2015 to $0.46 last year.

Valuation concerns have been keeping the stock in check, as even a $30 price target translates into a generous trailing earnings multiple of 65. Some bears will argue that even Holthouse's new price goal of $30 is too high in that scenario, but it also sets the stage for what Shake Shack has to do if it wants to bust through the $40 ceiling instead of fall through the $30 floor. If Shake Shack is able to pump up its comps, it would accelerate top-line growth based on current expansion goals. It's another story entirely if same-restaurant sales turn negative. Shake Shack stock may seem boring these days with its narrow trading range since buckling below $40 last summer, but it's not likely to stay in the $30s for long. Will it be the floor or ceiling that wins? Your move, Shake Shack.