Wall Street's focus remains on cash -- and who can make it flow.

Yesterday, I wrote about The Wall Street Journal's (link has pay wall) recent report on oil companies and their cash flow -- which companies are generating enough cash to cover their capital needs and dividend payouts, and which ones cannot.

That report seems to have sparked a spate of head-scratching (and back-of-the-napkin scribbling) on Wall Street. Deutsche Bank in particular sketched out an argument for why it thinks that of all the big oil majors, Britain's BP (BP 1.67%) may have the best chance of producing at least breakeven free cash flow if oil can rise to at least $60 a barrel.

But today we have another banker coming forward, and this one thinks it has found an even better bet for lower oil prices: Suncor (SU 3.24%). Here are three things you need to know about that. 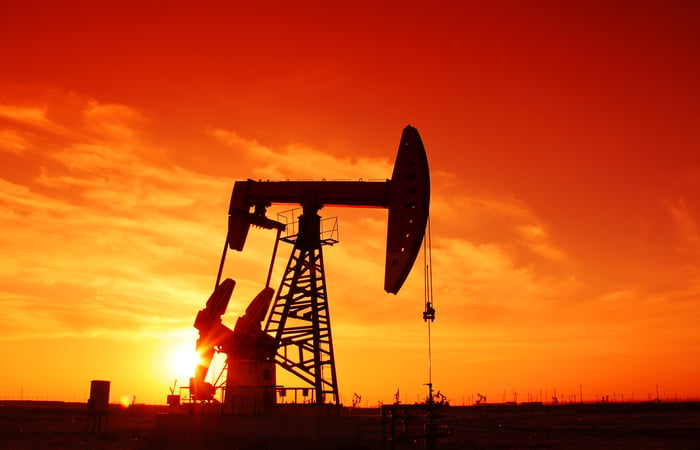 This morning, StreetInsider.com reports that Goldman Sachs is upgrading Canadian oil sands czar Suncor to its highest rating, "Conviction Buy," and assigning the stock a price target of $38. If Goldman is right about that, Suncor stock holds the potential to earn investors a 22% profit over the course of the next 12 months.

But why does Goldman think it's right?

2. Second verse, same as the first

Similar to what we saw in Deutsche's BP recommendation yesterday, Goldman Sachs is hanging its buy thesis on a belief that revenue from new projects (the Hebron field and Fort Hills in Alberta, in Suncor's case) will yield higher production and more cash flow for Suncor. The analyst further posits that Suncor will apply this cash to stock buybacks and dividend hikes, thus rewarding investors.

The analyst also believes that, in contrast to the more famous oil majors, Suncor has the ability to not just break even, but actually generate "strong" free cash flow -- perhaps even at lower oil prices. Suncor has made great strides in lowering its own costs of production in recent years. Four years ago, says the company, it cost it $37 Canadian dollars to produce a barrel of heavy crude oil. By 2016, though, the company had cut that cost by 40%, to just CA$22.15.

With such low cost of production, some analysts believe that Suncor is now capable of breaking even on its business at oil prices as low as $30 to $40 a barrel (this time in U.S. dollars, as oil prices are quoted internationally).

If breaking even on free cash flow is the name of the game in oil today, Suncor may have an advantage over larger rivals such as BP, ExxonMobil (XOM 2.45%), and Royal Dutch Shell (RDS.A) (RDS.B), which according to The Wall Street Journal require oil prices of anywhere from $50 to $60 a barrel to break even.

Despite this advantage, though, Goldman Sachs argues that investors are undervaluing Suncor stock, and that it actually trades at an "attractive discount to peers." Does that thesis hold water?

It depends on how you look at it. Valued on trailing earnings, Suncor stock sells for a price-to-earnings ratio of 155 today. That's a big discount to the 968 P/E at Deutsche-recommended BP (although both valuations still look insanely big, due to exceedingly thin profits oil companies are earning right now). On the other hand, though, Suncor's 155 P/E doesn't seem to offer much of a discount at all when compared to shares of ExxonMobil (P/E: 44) or Royal Dutch Shell (P/E: 46).

Shift the focus to expected future profits, and Goldman's buy thesis falters even more. Honestly, it's hard to fathom exactly what kind of discount Goldman Sachs thinks it sees about here, because Suncor's forward P/E of 20 looks more expensive than any of BP (13), ExxonMobil (18), or Royal Dutch Shell (11).

When you get right down to it, therefore, it's certainly possible that Goldman Sachs is right about Suncor returning to free cash flow-positivity as oil prices linger above $50 a barrel. It's possible the analyst is also right about Suncor's intention to spend that free cash on share buybacks and dividend hikes. But the analyst looks entirely wrong in its assertion that Suncor "trades at an attractive discount to peers." And if Goldman can get a fact as obvious as this one so very wrong, I worry it throws the rest of its buy thesis into question as well.

Goldman Sachs may think Suncor is a buy at today's prices. I do not.