Please ensure Javascript is enabled for purposes of website accessibility
Log In Help Join The Motley Fool
Free Article
Join Nearly 1 Million Premium Members And Get More In-Depth Stock Guidance and Research
By Daniel B. Kline – Apr 5, 2017 at 9:19AM

Taking the risk out of producing entertainment makes all of these top picks.

Creating entertainment that people actually want to watch in numbers that make it profitable has always been a bit of gamble.

Sometimes artistic successes fail commercially, and in other cases projects that seem like obvious blockbusters fail to connect with audiences. It's a phenomenon that impacts both movies and television shows, making the entertainment business one unlike any other.

Hollywood stocks, shares in companies involved in the entertainment business, have traditionally been volatile because predicting hits has always been an inexact science. A movie like The Lone Ranger or The Michael J. Fox Show may seem like sure things -- packages with the right mix to guarantee success -- but fickle audiences may decide otherwise.

The three companies below, however, have managed to take much of the gamble out of making movies and television. Walt Disney (DIS -2.21%) and Comcast (CMCSA -2.77%) have found a formula to make movies with a greatly diminished risk of failure while Netflix (NFLX -0.27%) has figured out how to play by an entirely different set of rules. That makes these companies a smart choice to invest in even though they operate in a space that has traditionally been risky. 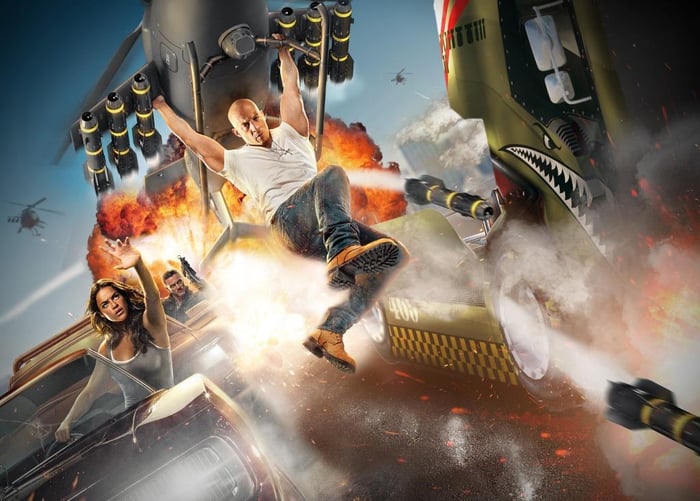 An artist rendering of the upcoming The Fast & The Furious Ride at Universal Studios Orlando. Image source: Comcast.

What are Walt Disney and Comcast doing?

These two entertainment giants are largely working off the same script. They have either created or acquired film franchises which produce steady, sizable hits (with little risk), that can be exploited across theme parks, television, merchandising, and various other channels. There's still no such thing as a guaranteed hit, but it's relatively easy to predict that a Star Wars movie or a Jurassic Park sequel won't bomb.

Disney has pioneered and mastered this strategy. Each year its film slate includes two or three Marvel releases, one or two Pixar films, a Star Wars picture, an animated movie under its own banner, and recently live-action versions of its cartoon classics. All of those properties will not only succeed at the box office -- it's really just a question of how much they will earn -- but most are also licensing bonanzas as well as source material for TV shows and theme park rides.

Comcast has exploited the same formula, albeit with a lineup that's not quite as strong as its rival's. The company has franchises including Jurassic World, Fast & Furious, Despicable Me/Minions, Pitch Perfect, 50 Shades and a few other lesser players. The company has also bolstered its slate by acquiring Dreamworks, which owns Kung Fu Panda, Trolls, How to Train Your Dragon, and the recent hit The Boss Baby.

By lining up franchise after franchise, Comcast's Universal Pictures set a new global box office record in 2015 going over $5.5 billion only to have Disney shatter that mark in 2016 by taking in over $7 billion. In both cases, many of the the films that earned all that money have helped power Disney and Comcast's cable empires, broadcast networks, licensing divisions, and theme parks.

Netflix has a new model

While Disney and Comcast have made having hits more predictable, Netflix has taken away the need for them. Because the company's revenue comes from subscriptions, it does not need its content to become a hit. In fact, the company does not release ratings for its shows and films.

The streaming service uses a model where it needs to have enough programming to attract and keep subscribers. That means that a series or movie which has niche appeal, can be a big winner. For example, Netflix recently extended its deal with Adam Sandler, because while his movies are to-say-the-least not critically well regarded, they appeal to his fan base and are actually heavily viewed.

"The films of Sandler -- the first established movie star to refocus his career toward Netflix -- have proven very popular and helpful in gaining subscribers and keeping them in place," wrote Deadline's Mike Fleming Jr. "Sandler started with The Ridiculous 6 and The Do-Over, which Netflix called its biggest film releases."

In the Netflix model it's also important to note that content has long-term value. The more shows and films it piles up, the more reasons a new subscriber has to join and to remain a member (and the less it has to spend licensing outside, already-seen content). Whether it be a Sandler movie, a prestigious original or a little-watched show, the company's programming only has to appeal to a small segment of its viewers.

Netflix does not need hits or critical acclaim. It needs to have enough for each niche audience it serves to keep them paying each month. That's clearly something the company has succeeded in doing as it has been able to grow to over 89 million paying members, gaining 7 million in 2016 alone, with no signs that it will slow down anytime soon.