Shares of the diversified shipping company are down more than 96% since the start of the year.

It doesn't seem like more than a few days go by without DryShips (DRYS) showing up on a screen of stocks that have recently suffered a big decline. In the past week alone the stock is down nearly 40%, including another double-digit drop today. With that recent plunge, the stock is now down more than 96% since the start of the year, despite the fact that it shored up its balance sheet at the end of 2016 and has started to rebuild its fleet. It certainly begs the question of what might halt the company's slide.

The downside of dilution

DryShips has tried everything to jump-start its stock. In early January, the company announced its strategic expansion into the gas tanker market, signing the option to acquire up to four very large gas carriers (VLGCs) for a total purchase price of $334 million. What's noteworthy about this deal is that the vessels came with long-term time charters that included a total backlog of $390 million, which will provide the company with a base of relatively stable cash flow. 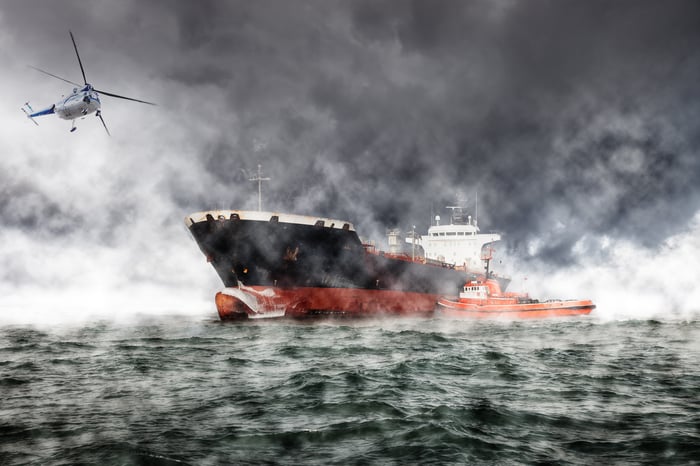 From there the company would go on to re-enter the tanker market, initiate a regular quarterly dividend, diversify its dry bulk fleet, and make additional tanker and dry bulk acquisitions. In total, the company spent $662 million on 14 vessels, quickly rebuilding its fleet. However, that buying binge came with one significant downside: dilution. The company issued a remarkable amount of stock to outside investors who provided it with the capital that made these deals possible: 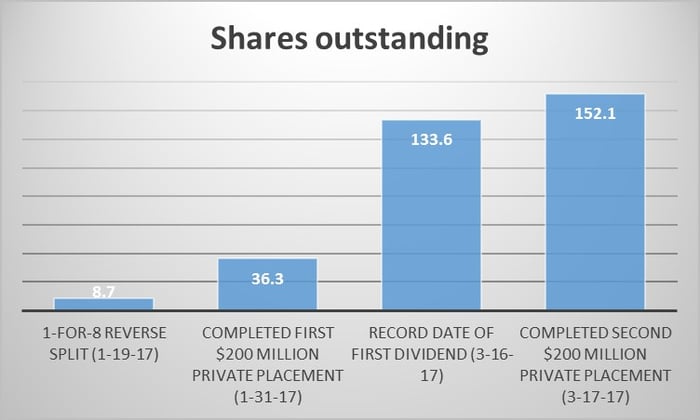 Data source: DryShips. Chart by author. In millions of shares.

However, that dilution has proven to be a heavy weight to bear. That's because investors have seen their slice of ownership in DryShips' chopped into pieces and handed out to outside investors. As a result, their share in the company has fallen by 96% since the start of the year due to all this dilution.

Unfortunately, more dilution is on the way because the company recently signed an agreement to sell up to $226.4 million in stock to an unaffiliated investor over the next two years. That said, it'll likely complete the deal in the near term, given the speed at which it has finished the other two private placements, meaning that the outstanding share count will continue to surge.

What could turn this ship around?

While the pressure from additional dilution could keep this stock down for a while, DryShips' hope is that its recent acquisitions will more than make up the difference. In fact, the company believes that its rebuilt fleet can generate $70 million of annual earnings before interest, taxes, depreciation, and amortization (EBITDA), which is a massive shift for a company that reported negative $42 million of adjusted EBITDA last year.

One of the drivers of the anticipated reversal is the significant improvement in spot rates for dry bulk vessels this year. For example, under the company's current assumptions, ships from its retained Panamax fleet should pull in $10,000 per day. That is a remarkable improvement versus last year, when its fleet averaged a daily rate of just $3,658 against daily operating expenses of $4,826, causing it to lose money. Meanwhile, the company's newly acquired Newcastlemax and Kamsarmax vessels should fetch even higher dayrates of $12,000 and $10,000, respectively, according to the company's projection.

One reason DryShips is using those rates in its forecast is that market conditions have improved dramatically. Rival Eagle Bulk Shipping (EGLE -2.55%), for example, recently pointed out that "the dry bulk market picked up momentum during fourth quarter, and we continue to see encouraging signs through the first quarter of 2017." That promising trend led Eagle Bulk Shipping also to raise equity capital recently, which it used to buy more ships. Eagle Bulk Shipping is confident that its bottom line will improve this year and provide a boost to its stock price, which is the same thing DryShips expects. 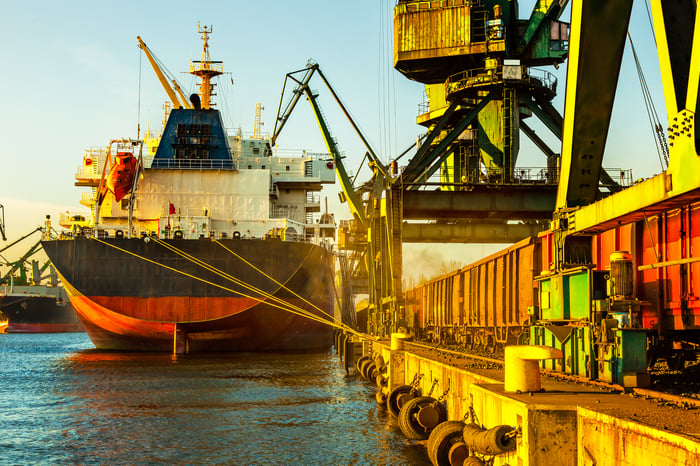 That said, while dry bulk rates are improving, tanker rates face some headwinds that might cause DryShips' new tanker fleet to miss the mark. That's clear from comments by Teekay Tankers (TNK 2.53%), which recently noted that while tanker rates were strong at the end of last year and into early 2017, "rates have begun to soften." Teekay Tankers expects that softening to continue, anticipating that "2017 will be a challenging year overall for the tanker market." That wasn't an isolated view, as Frontline (FRO 4.18%) also expects rates to remain under pressure this year. One thing Frontline noted as a headwind was a boatload of upcoming newbuild deliveries, which includes DryShips' recently acquired newbuild Aframax tanker that will enter service this quarter. Given that outlook, this market could offset some of the positives of an improving dry bulk market, especially if oil tanker dayrates fall below DryShips' forecast, which might put additional pressure on the stock price.

A nearly unending stream of dilution has drained almost all the value out of DryShips' stock this year. However, the reason it sold so much stock is that it wanted to rebuild its fleet as quickly as possible to take advantage of improving market conditions, which could be just the ticket to get its stock moving higher. However, if conditions don't improve as expected, or if the tanker market weakens further, then there might still be more downside to DryShips. Needless to say, investors need an iron stomach with this stock.