Want to get the most out of an investment account in retirement? Take a look at CVS Health, Verizon Communications, and General Motors.

It is challenging for older investors to find reliable, income-paying stocks that trade at cheap valuations. The reason? Stable businesses with the ability to churn out a stream of growing dividend payments rarely go on sale. Every once in a while, though, a few of them fall out of favor, providing an opportunity to buy in at a good price.

So we asked our contributors if they see any stocks on sale today that would fit nicely in a senior citizen's portfolio. They came up with three: CVS Health (CVS 2.05%), Verizon Communications (VZ 0.83%), and General Motors (GM 2.65%). Here's a look at why they are well suited for retirement accounts. 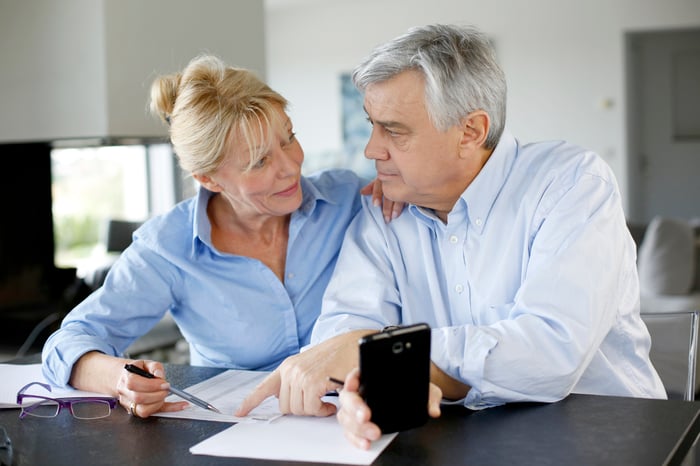 Rich Duprey (CVS Health): Senior citizens just might consider it a triple play if they can see an investment grow, generate income, and help them save money. And that's just what an investor of any age can get with CVS Health.

Generic drugs and biosimilars -- or biological products that are highly similar to Food and Drug Administration-approved, brand-name specialty biologics -- will continue to be key drivers of lowering the cost of healthcare for patients, taxpayers, and the entire industry.

At the start of 2017, according to CVS, more than 4,000 generic drugs were pending approval by the FDA. A RAND Corporation study said biosimilar products could reduce spending on biologics by an estimated $44.2 billion over the next decade, which would be on top of the mitigating effects brand-name drugs had on rising drug cost inflation.

By continuing to combat price inflation and keeping prescriptions affordable for customers, it aligns its business with its corporate purpose of promoting better health, much like CVS' decision to stop selling tobacco products even though it cost it $2 billion in annual revenue. That kind of long-term outlook will ultimately benefit the pharmacy retailer's bottom line.

CVS's stock trades at around 16 times earnings and just 12 times analyst estimates for next year. Further, the enterprise value of CVS also trades for just 13 times its free cash flow, which -- although not bargain-basement material -- is very discounted nonetheless. With an annual dividend of $2 per share currently yielding 2.6%, CVS Health could equate to a walk-off home run for senior citizens.

A business built to pay off handsomely

Tyler Crowe (Verizon Communications): What more could you want from an income investment than a stock that pays a 4.7% dividend yield supported by a business model built to generate boatloads of cash? That is what Verizon Communications provides today, and that business has the potential to get stronger over time.

The investment thesis around Verizon depends almost entirely on its wireless subscriber base. While it isn't a regulated business, it very much acts that way. Verizon has the largest subscriber base among the wireless carriers -- about 114 million -- and boasts the lowest churn rate among the major carriers at 1.26%. That means customers are sticking around and paying their monthly bills. Those subscriptions are an absolute cash cow. In 2016, Verizon generated $22.7 billion in cash from operations, and that was after a several billion dollar increase in working capital. While the company does spend billions every year to improve its network infrastructure, it consistently generates more than enough to pay its generous dividend.

Some are concerned about Verizon's recent acquisition of Yahoo! and how the company will bundle its wireless business with its media offerings to generate profit. Here's the thing, though: Verizon's existing business gives it the flexibility to take these kinds of risks. If it swings and misses, it still has that subscriber base to fall back on and try something else. Also, with the upcoming transition to 5G wireless data service in the works, its subscribers will be using a lot more data and likely paying more for the service.

Today, shares of Verizon trade at an enterprise value-to-EBITDA ratio of 7.1 times. That is a middle-of-the-road valuation for Verizon as it traditionally trades at a significant discount to the broader market. For those looking for a reliable income investment, though, Verizon is tough to beat.

Daniel Miller (General Motors): Senior citizens looking to own stocks that can produce income should absolutely look into this ridiculously cheap automaker. General Motors' forward price-to-earnings multiple is less than six times and literally the cheapest in the S&P 500 -- and far below the S&P 500 average of about 21.5 times.

Thanks to that cheap valuation, its $1.52 annual dividend is a juicy yield of 4.3%. The kicker is there might actually be room for dividend growth in the near term as the payout is only projected at about 24% of its 2017 earnings. In addition to its healthy dividend, GM continues to return even more value to shareholders through share buybacks.

In fact, GM recently announced an additional $5 billion in common stock repurchases under the existing program. That move brings GM's total share repurchase authorization to a staggering $14 billion and management expects to return roughly $7 billion in cash to shareholders in 2017 alone. Since 2012, GM has dished back almost $25 billion to shareholders through dividends and share repurchases, which is almost half of the company's current valuation and more than 90% of its adjusted automotive free cash flow since 2012.

Ultimately, GM is much healthier than it has been in years past. Management is focusing on more robust retail sales, rather than fleet sales, researching and developing autonomous vehicles, and investing in companies like Lyft for a future of ride-hailing and smart mobility apps. Returning billions to shareholders annually and sporting an extraordinarily cheap valuation, GM makes a lot of sense for income investors hunting for value.