Coca-Cola might be a classic dividend play, but PepsiCo offers a much better mix of income and growth at cheaper valuations.

But investors should always look beyond a stock's yield to determine if it's a good income investment. Today, I'll explain why PepsiCo is actually a better dividend stock than Coca-Cola based on comparisons between the two companies' payout ratios, business models, growth trajectories, price performance, and valuations. 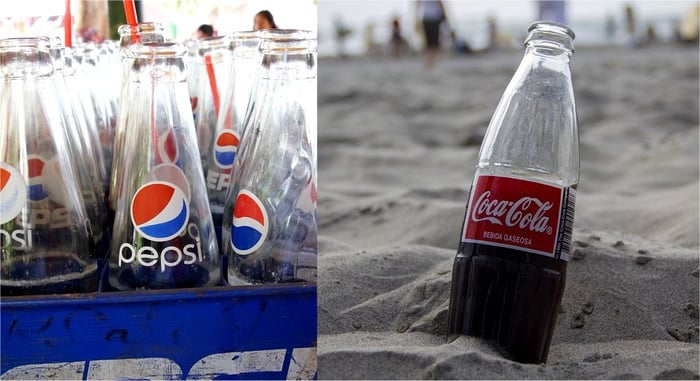 Payout ratios represent the percentage of a company's earnings or free cash flow (FCF) that was spent on dividends over the past year. Lower payout ratios indicate that a company has room to grow its dividend, while ratios exceeding 100% indicate that the dividend could be cut.

Both companies have been affected by slowing soda consumption, which hit a 30-year low in the U.S. in 2015. Both also responded to the market shift by diversifying into bottled water, teas, sports drinks, and other non-carbonated beverages. PepsiCo has also been pivoting all its brands -- beverages and foods -- toward healthier "guilt-free" items. As for Coca-Cola, its lack of a packaged foods business has slightly throttled its growth, as we'll see in the next point.

If a company can't grow its revenue and earnings, its ability to support or hike its dividends will weaken. PepsiCo posted 0.4% sales growth in 2016, but Coca-Cola's sales fell 5%.

Both PepsiCo and Coca-Cola struggled with currency headwinds over the past year. That's why investors usually focus on organic growth numbers, which exclude the impact of foreign exchange rates, acquisitions, divestitures, and other one-time charges. On that basis, PepsiCo's revenue rose 3.7% for the year, and Coca-Cola's grew 3%.

On the bottom line, PepsiCo's earnings rose 19% (due to favorable year-over-year comparisons to its Venezuela impairment in 2015), while its core earnings -- which are comparable to its organic numbers -- grew 9%. Coca-Cola's earnings fell 10% as reported, but rose 5% on a constant currency basis. Based on these numbers, PepsiCo appears to be growing slightly faster than Coca-Cola.

Price performance generally doesn't matter as much as dividends to income investors, but we should note that PepsiCo's 69% rally over the past five years crushed Coca-Cola's 16% gain. PepsiCo paid a much higher yield than Coca-Cola back in 2012, but the stock's rally caused its yield to drift lower. 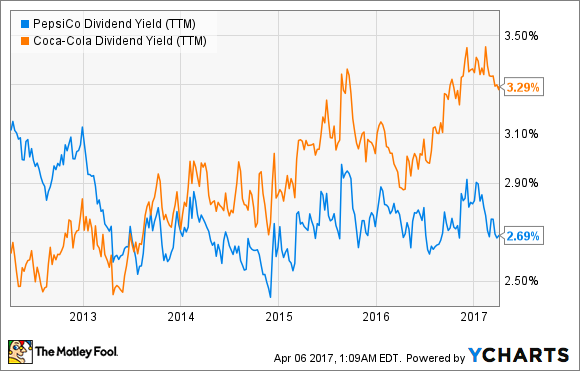 Coca-Cola has a higher yield than PepsiCo, but it also has a higher payout ratio, less diversified business model, higher exposure to sluggish soda sales, weaker growth, and higher valuations. Therefore, I believe that investors should accept PepsiCo's lower yield for its long-term growth and stability.