There are stocks that outperform the market, and then there are some that absolutely crush it, catching investors off guard. It gets even more interesting when stocks that didn't appear too promising end up with market-thumping returns, somewhat like Advanced Micro Devices (AMD -1.95%), Facebook (META -1.64%), and United Rentals (URI 0.76%), as our contributors explain below.

A surge of optimism

Tim Green (Advanced Micro Devices): I suggested last April that shares of AMD, then trading for less than $3 per share, could soar if investor sentiment toward the stock improved. That's exactly what happened, to a surprising degree. AMD stock is now up more than 400% from the date of that article. 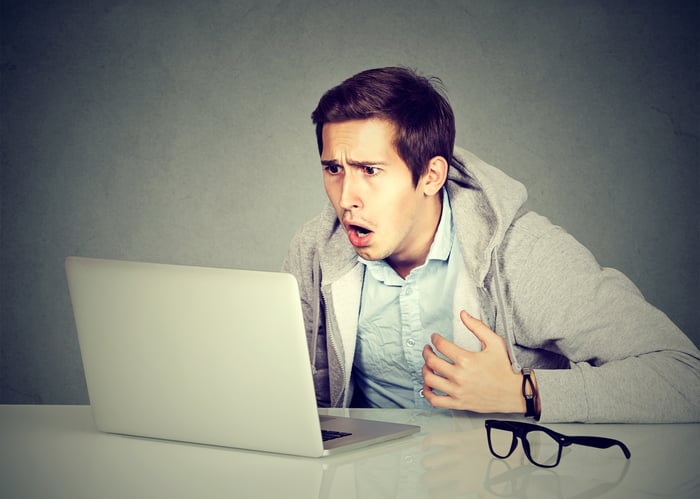 AMD has yet to produce results that justify all of the optimism now surrounding the stock. Its mainstream Polaris graphics cards were launched last year, but the company still produced an adjusted net loss of $117 million. Investors are betting that AMD's 2017 product launches, which include Ryzen PC CPUs, Naples server CPUs, and Vega high-end GPUs, will finally return it to the black. They very well may, but with a market capitalization of nearly $14 billion and sales of just $4.3 billion, anything short of significant market share gains will prove disappointing.

The company has only launched the highest-end Ryzen CPUs so far this year, with lower-end versions, Naples, and Vega still to come. Whether AMD remains a winning stock in 2017 depends on how these products fare. The high-end Ryzen 7 series received mixed reviews, praised for its multicore performance but criticized for its gaming performance. If all of AMD's launches this year are mixed bags, the euphoria surrounding the stock could fade away.

No one saw this stock getting lifted so high

Neha Chamaria (United Rentals): Who'd think a company that's into a business as boring as renting equipment out to the construction industry could see its stock double in one year? That's the story of United Rentals, one of the top three S&P 500 performers in the past year. As of this writing, United Rentals is up a staggering 113% in one year.

You can credit the presidential elections as the event that triggered the huge run-up in the rental company's stock. Or more specifically, President Donald Trump's campaign promises of rebuilding America's infrastructure, which, if acted on, should mean brisk business for United Rentals.

The fact that United Rentals crushed analysts' estimates of adjusted profits per share and credited "broad-based demand" for it when it reported its fourth-quarter numbers in January further fueled investors' optimism. CEO Michael Kneeland even went on to say that 2017 should be "a year of notable growth" for several reasons, including its acquisition of NES Rentals, improving consumer sentiment, and the ongoing strength in key leading indicators for the industry. At the same time, Kneeland didn't hesitate saying "it's too early to call" when referring to the optimism around a possible government infrastructure stimulus package.

So in a way, United Rentals' crazy run-up is surprising. The stock is highly susceptible to macro factors, and no one really knows how policies under Trump's administration will pan out. The company's net profits have hardly budged in the past couple of years, though it generated strong free cash flows last year. I wouldn't call United Rentals too pricey at 19 times trailing earnings, especially given its forward P/E estimate of only 14. United Rentals may not grow gangbusters, but it is clearly already on the growth track. That should keep the stock moving higher, just maybe not as much as in the past year.

An idea I tried too hard to kill

Jordan Wathen (Facebook): When Facebook went public, I thought the only path to growth was squeezing more revenue from every user. The only way to do it, as far as I saw it, was to push more ads into every bit of content, killing the user experience. In short, I thought it would be impossible for Facebook to grow into its valuation -- there just weren't many levers left to pull.

I couldn't have been more wrong. Facebook's advertising revenue per user grew from $9.51 per user in the U.S. and Canada in the full year of 2011 to $19.28 per user in the fourth quarter of 2016. All in all, Facebook is generating about six times more revenue from its average U.S. and Canada user last year than it did prior to its IPO. The majority of the incremental revenue flows straight to the bottom line, resulting in rapidly growing profits.

Realistically, I missed a few things when I looked at Facebook. I missed how important mobile would be to getting its users more engaged, generating more ad impressions, and protecting Facebook from ad-blocker losses. I also missed just how much more room Facebook had to grow in terms of users, both acquired (Instagram and WhatsApp) and from organic growth. I comfort myself knowing that I only missed out on five-year returns of about 270% at the worst and more than 600% in the best case.