Please ensure Javascript is enabled for purposes of website accessibility
Log In Help Join The Motley Fool
Free Article Join Over 1 Million Premium Members And Get More In-Depth Stock Guidance and Research
By Jeremy Bowman - Apr 6, 2017 at 7:00AM

A look at two of the best-known destination stocks in the market.

On the surface, Las Vegas Sands Corp. (LVS 5.03%) and Vail Resorts (MTN 2.34%) would seem to have little in common -- one is a casino giant and the other operates ski resorts.

However, from an investor perspective, the stocks bear similarities: Both are dividend payers and both compete in the entertainment industry, which is highly dependent on the overall economy.

As the chart below shows, Vail Resorts has significantly outperformed Las Vegas Sands over the last five years. 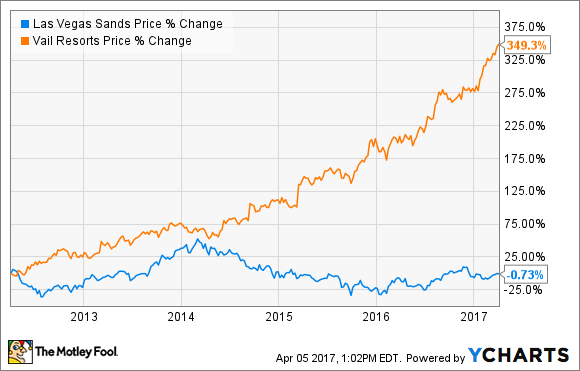 While Las Vegas Sands has risen and fallen based on its fortunes in Macau, the Chinese territory that has become a gambling mecca, Vail Resorts has found steady growth through its acquisition strategy. But as investors know, conditions change, and Vail's past outperformance is no guarantee that it will continue.

Let's take a closer look at what each stock has to offer today to see which is the better buy.

Rolling the dice in Macau

One of the world's biggest casino companies, Las Vegas Sands has properties in Macau, Singapore, Las Vegas and Pennsylvania.

The majority of its revenue, however, comes from Macau, where it has five properties. Much of the casino industry's focus has been on Macau in recent years: The island has become the world's biggest gaming market with $28.1 billion in gaming revenues last year.   However, that market shrunk last year by 3.4%, which was the third straight year it declined following a crackdown by the Chinese government on corruption in business junkets to Macau, which deterred some VIP gamblers from the destination. As a result, Las Vegas Sands' revenue and profit fell significantly during that period. Net revenues dropped 21.8% over the last two years, and earnings per share fell 40.3% over the same period.

More recently, however, things have been looking up in Macau, as wealthy gamblers seem to be returning to the island. March revenues jumped 18% -- Macau's eighth consecutive monthly increase in gaming revenues. Should that trend continue, Las Vegas Sands looks well-positioned to capitalize on the comeback with five properties on the island, one of which, the Parisian, recently opened. Meanwhile, its Marina Bay Sands in Singapore has been a strong performer, as have its properties in the U.S. Vail Resorts is the country's biggest operator of ski resorts. In addition to its namesake mountain, the company owns several others in Colorado, elsewhere in North America, and even one in Australia. As noted above, its acquisitions have driven the stock's rally over the last five years.

Among the high-profile ski areas the company has purchase in that time are Park City, Utah, which was the third-most visited ski mountain in the U.S. last year (Vail owns all of the top four), and Whistler/Blackcomb in British Columbia, Canada, the largest and most visited ski resort in North America.

The company has also made smaller acquisitions, including Stowe Mountain for $50 million in February, and Wilmot, Wisconsin, just 65 miles from Chicago.

In addition to targeting high-profile properties, Vail has recently been making efforts to expand to ski areas near cities in the Midwest and Northeast, helping it promote its brand to a new audience and allowing it to market its Western mountains to them. Vail Resorts leverages these acquisitions by combining them with different passes that skiers can take advantage of, including the Epic pass, which gives access to all of its mountains. The company also has the capital to invest in properties, allowing it to improve the guest experience with faster lifts and enhanced lodging options, all of which helps boost financial performance. In its last fiscal year, revenue increased 14% and EPS was up 31%.

This year was the first ski season with Whistler/Blackcomb as part of its portfolio, and analysts are expecting higher revenue growth in the 20% range, so there should be more acquisitions down the line.

Despite declining profits recently, Las Vegas Sands stock appears to have a floor because of its 5.1% dividend yield, which is substantially better than Vail Resorts' yield at 1.8%. However, the casino operator's dividend payout is currently above its earnings per share, meaning it has to dip into its cash balance to fund it, and those large payouts could also cramp potential expansion efforts.

While the recovery in Macau is encouraging, the political tension in China has not entirely been resolved, and LVS is also facing increased competition there. Vail, meanwhile, has demonstrated the effectiveness of its acquisition strategy, and the company has plenty of room to run as it integrates Whistler/Blackcomb and continues to tap the opportunities on the East Coast. Though the stock is pricey at a P/E of 40, compared to LVS' P/E of 26, its predictable earnings growth makes it the better buy today.