Regional amusement park operators are starting to gear up for the telltale summer season, and at least one Wall Street pro is getting ready to ride. Goldman analyst Christopher Prykull initiated coverage of Cedar Fair (FUN 0.25%) and Six Flags (SIX 6.15%) on Thursday. He is also taking on SeaWorld Entertainment (SEAS 4.81%), the controversial operator of SeaWorld and Busch Gardens theme parks. 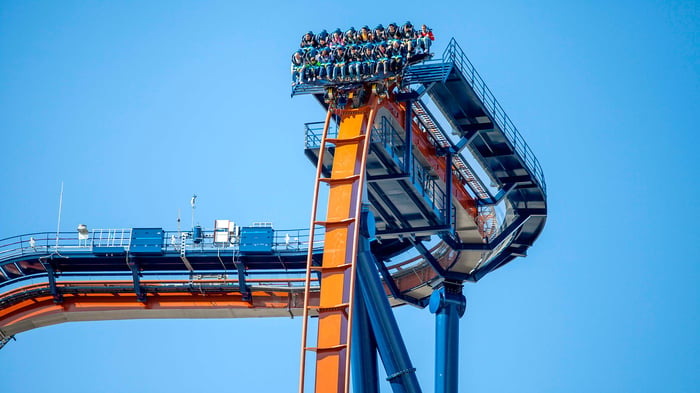 You must be this tall to ride these stocks

Goldman's Prykull is bullish on Cedar Fair, the company behind several regional amusement parks including Knott's Berry Farm in California and its flagship Cedar Point in Ohio. Prykull feels that there are many short- and long-term catalysts for earnings beats, opening the door for multiple expansion. Prykull feels that its best-of-class locations will serve Cedar Fair investors well, and he's tagging the stock with a buy rating. His price target of $81 suggests 19% of upside, and that's before we even consider the investment's generous nearly 5% yield.

He's not as cool on fellow regional amusement park operator Six Flags. Prykull isn't as impressed with its collection of properties, and feels that its valuation -- in line with its peers -- is fair. He's initiating coverage of Six Flags with a neutral market call and a $65 price target that still represents a decent 13% of upside from Wednesday's close.

It's a different story when it comes to SeaWorld Entertainment. He sees an unfavorable risk-reward ratio for the operator of marine-life-themed parks. Prykull is unimpressed with SeaWorld's below-average growth and returns, and fears that cost-cutting measures at the company will fall short of delivering meaningful growth as it delays a potential turnaround in popularity. He is going with a $16 price target, implying 11% of downside from here.

The boys of summer

Many of SeaWorld's properties are open year-round, but the same can't be said for Cedar Fair and Six Flags. The two regional operators have mostly seasonal parks in their arsenal, and the lion's share of their business will take place during the steamy summer months that are just around the corner.

The good news for Cedar Fair and Six Flags is that they rely mostly on locals to generate turnstile clicks. Attractively priced season passes encourage repeat visits from those living a short car drive from their thrill havens, a tempting investing proposition for those fearing that President Donald Trump's policies will make stateside residents likely to stay within the country this summer.

SeaWorld, on the other hand, needs a healthy flow of international tourism to help it meet its attendance goals. It's easy to blame fallout from the SeaWorld-skewering Blackfish documentary as the culprit of shrinking attendance in three of the past four years, but its biggest shortfall last year was the result of a sharp decline of Latin American tourists into Florida.

The potent operating season is coming for the country's amusement park operators, but investors know that these businesses are ultimately year-round affairs when it comes to their stocks.