The stock has been on a solid run so far this year -- but it's still priced at half of what it was three years ago.

After a brutal last few years, Wynn Resorts (WYNN -0.60%) seems to gaining some momentum now. Its stock rose nearly 20% in March alone, according to data from S&P Global Market Intelligence, as gaming in Macau has seemingly turned a corner toward high growth once again.

Wynn gets nearly two thirds of its total income from Macau, a region that saw more than two years of straight declines after the government in Beijing strengthened regulations and cracked down on corruption, which took a toll on tourism and gambling in the territory -- the only place in China where casino gaming is legal.

Since late last year, however, Macau has posted a string of year-over-year gains in monthly gaming revenues, and March was the most successful month in some time with an 18% increase. Wall Street has largely seen this as a win for the companies with the biggest presence there, especially Wynn Resorts, which opened a new massive resort on Macau's Cotai Strip in August. 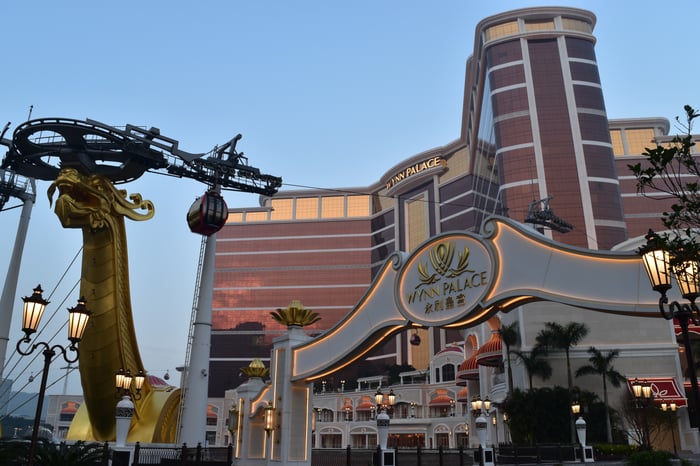 Wynn Resorts' full-year 2016 revenue was up 9.6%, but fourth-quarter revenue surged more than 37% year over year -- a good sign of momentum. Earnings per share for the year grew 24%, and that growth rates is expected to increase steadily in 2017, making what looks like an expensive stock now -- trading at 50 times trailing earnings -- seem much more attractive at around 24 times forward earnings estimates.

Even though Wynn Resorts stock is up 36% year to date, it's actually still down more than 50% from the 2014 high it hit just before the Macau crash took hold. Granted, we can see now that the industry was probably overheated in 2014, but it's encouraging to consider how much room Wynn stock has to climb back up toward where it was, now that Macau is growing again -- not to mention the company's plans to grow its resort in Las Vegas and open a new one near Boston within the next few years.