Dubbed the "Everything Store," Amazon.com (NASDAQ:AMZN) is making that name truer and truer with each passing year. The company is dominating retail sectors ranging from books to electronics to sporting goods and even apparel.  And it's branching beyond retail into areas like video streaming and cloud computing to flex its muscles.

But one component of the retail industry has eluded Amazon's grasp: groceries. With annual nationwide sales of groceries in the $800 billion range, it's easy to see why the company covets a piece of that market. Not only can fresh food bring a huge revenue stream into Amazon's fold, as it did with Wal-Mart (NYSE:WMT), but the repetitive nature of grocery shopping also fits within Amazon's overall business model, which favors repeated small purchases over big-ticket one-time purchases like car parts or building materials.

Recently, Amazon has intensified its efforts in the grocery space. Last year, the company expanded its AmazonFresh delivery program to a number of new cities and lowered the price from $299/year to $15/month, equal to a substantial drop. In December, it unveiled Amazon Go, a cashierless convenience store that uses cameras, sensors and other technology to charge customers based on what they take out of the store. The store was supposed to open to the public last week, but issues with the technology have delayed that opening. 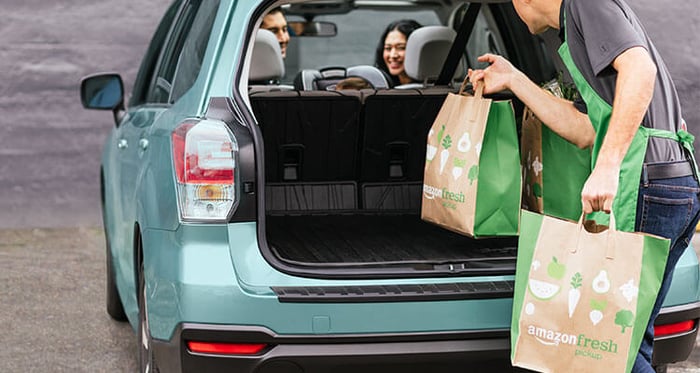 Just last week, Amazon announced a new program called AmazonFresh Pickup at two locations in Seattle where customers will soon be able to order groceries on their phones and then retrieve them at a drive-thru kiosk. In an unrelated move, the company also shuttered its Quidsi subsidisary, the parent of Diapers.com, and said it would move its software development team to "focus on building technology for AmazonFresh."

Clearly, grocery has become a key focus for Amazon's domestic business. The opportunity is huge, with nearly $1 trillion in annual sales, but the timing of its current push is curious -- Amazon moved slowly with Fresh after first introducing it in Seattle in 2007.

The most logical explanation for Amazon's increased fixation on disrupting the supermarket business is that the company needs to continue growing its top line. Wall Street demands growth from nearly every publicly traded company, but Amazon, with its triple-digit P/E valuation and track record of 20% revenue growth or better in nearly every quarter in its history, needs to maintain that growth rate. Without it, the stock would likely plummet unless profits suddenly jumped.

Amazon Prime, the $99/year membership program that offers free two-day shipping, video streaming, and a host of other benefits, has proven to be enormously popular, but with roughly half of American households signed up for the service, that growth engine may be fading as Amazon runs out of new customers to convert. The grocery sector is one of the few opportunities with the potential to replace it.

With speedy delivery and tens of millions of items available on its website, Amazon has long aspired to be a one-shop for its customers. It's used Prime to further strengthen that bond, persuading customers to shop on Amazon before, or even without, considering any alternatives.

But groceries has long been a weakness. Most Americans shop for fresh food multiple times a month, and losing out on that frequent purchase means shoppers depend on rivals like Wal-Mart and Costco, rather than just looking to Amazon for all their needs. Selling groceries also gives Amazon the potential to further bundle services to a membership model as it's tried to do with AmazonFresh, strengthening its competitive advantages.

Of all of Amazon's ideas, Amazon Go with its breakthrough technology has the most potential to disrupt the industry, but the recent delays call its future into question. AmazonFresh Pickup seems to be little more than a clone of a service Wal-Mart and Kroger are already providing at hundreds of stores. And the delivery model, for a number of reasons, has just not taken off.

Grocery will likely continue to be challenging for Amazon. In addition to the special requirements of handling and delivering perishable goods, consumers often have urgent needs for food, like picking up something for dinner on the way home, and can't always order in advance and wait for it. Consumers have also shown they like to handle and select the produce they buy, creating a need for an in-person visit to the supermarket.

E-commerce is slowly influencing the industry as we see with the "click-and-collect" model, but without a significant innovation, Amazon is unlikely to see dramatic growth in the space. Its e-commerce strengths have historically been speed of delivery and selection, but those attributes simply aren't as valuable in the grocery industry.