Thursday was a positive day for the stock market, with all three major benchmarks posting modest gains from yesterday's close. Once again, though, the market finished well below the day's best levels. Many pointed to continuing uncertainty about the future course of monetary policy from the Federal Reserve and the geopolitical situation between the U.S. and China as factors that moderated optimistic views on the U.S. economy. Helping to power the market higher were several pieces of good news from high-profile stocks. Sunoco (SUN -1.25%), Rite Aid (RAD 1.11%), and Yum China (YUMC -0.63%) were among the best performers on the day. Below, we'll look more closely at these stocks to tell you why they did so well.

Sunoco sells off its gas stations

Shares of Sunoco jumped 21% after the company agreed to sell more than 1,100 of its convenience store and gas station locations to the Japanese parent company of 7-Eleven. Under the terms of the deal, Seven & I Holdings will pay $3.3 billion to Sunoco in exchange for the stores, with 7-Eleven executives saying that the move will help support growth in key regions including central Texas, Florida, the Mid-Atlantic, and the Northeast. For Sunoco, the move will allow the company to refocus its attention on being a premier fuel supplier, especially since the deal involves supplying roughly 2.2 billion gallons of fuel annually over the next 15 years to 7-Eleven. By using the proceeds to pay down debt, Sunoco should be in a better position to consider strategic moves like acquisitions to bolster its core business. 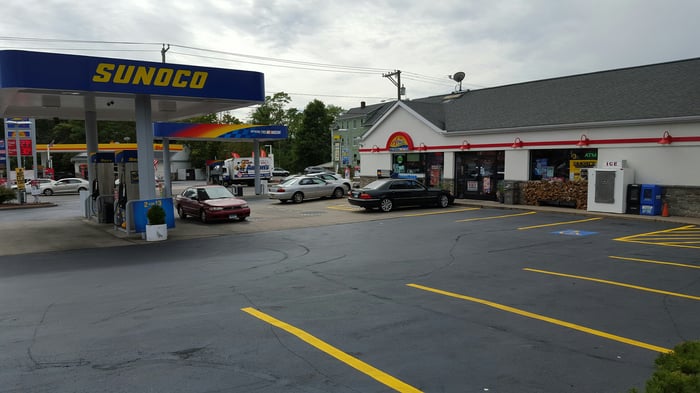 Rite Aid stock gained 7% in the wake of positive news from drugstore peer Fred's (FRED), which reported its fourth-quarter results on Thursday. Fred's posted a loss for the quarter, but the real news for Rite Aid shareholders came in comments that emphasized Fred's commitment to holding up its part of the bargain that could help the merger of Rite Aid with Walgreens Boots Alliance go through. Fred's believes it can buy as many as 1,200 Rite Aid locations if necessary to help the merger pass muster with regulators, but many remain skeptical of whether the currently small drugstore chain poses a true competitive threat to Walgreens, one that will convince antitrust officials to allow the Rite Aid acquisition to take place. Walgreens is losing patience, and Rite Aid shareholders need to hope that a deal can get done quickly to avoid yet another major disruption to its business.

Finally, shares of Yum China rose 9%. The Chinese operator of KFC and Pizza Hut stores reported better fiscal first-quarter results than most had anticipated, including gains in same-store sales for both major restaurant chains. Net income climbed by more than a fifth, and restaurant margin figures rose dramatically. Delivery has become an important source of growth for Yum China, and the company has also done well in its initiatives to encourage digital ordering. With a huge lead over competitors both from within and outside China, Yum China believes that it should be able to maintain its leadership role in the nation's most populous country well into the future.