Please ensure Javascript is enabled for purposes of website accessibility
Log In Help Join The Motley Fool
Free Article Join Over 1 Million Premium Members And Get More In-Depth Stock Guidance and Research
By Dan Caplinger - Apr 7, 2017 at 10:44AM

The banking giant has a long history but still leads its industry.

The history of JP Morgan Chase (JPM -0.82%) dates back almost to the founding of our nation. And, over more than two centuries, the institutions that would later combine to form the current banking giant have played prominent roles in the growth of the U.S. economy. Yet what's most important to current investors is the fact that JPMorgan Chase has managed to recover fully from the financial crisis in 2008 and jump to new all-time record heights. With prospects for a more favorable regulatory environment for banks, some believe JPMorgan Chase could climb even higher. A look at JPMorgan's stock history can shed some light on how the bank has handled similar opportunities in the past and what investors should look for going forward.

Over the past 50 years or so, JPMorgan Chase has gone through some major transformations, but the stock has moved generally in line with the health of the U.S. economy. Strong performance in the 1980s gave way to a brief disruption following the 1987 stock market crash. Then, the bank generally participated in the huge run-up in the economy during the 1990s, topping out at the turn of the millennium and then pulling back at the end of the tech boom and the resulting recession in 2000 through 2002.

The most obvious formative event for JPMorgan Chase came in 2000, when J.P. Morgan & Co. merged with Chase Manhattan Bank. Yet that was only one of the many corporate combinations that have occurred during the bank's history. In 2004, JPMorgan Chase acquired Bank One in another key move that broadened the company's scope to include more exposure to the Midwest and Southern U.S. market. 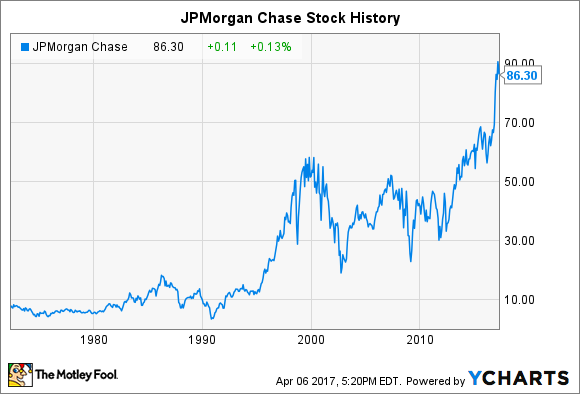 How JPMorgan dealt with the financial crisis

JPMorgan's role in the financial crisis proved to be critical. The company acquired Bear Stearns in early 2008, in what proved to be just the opening salvo of problems that would lead to the near-collapse of the global financial system.

Of potentially more importance was JPMorgan's move to acquire Washington Mutual later that year. Washington Mutual brought with it considerable exposure to the mortgage market, and many argue that without that acquisition, JPMorgan could have dramatically reduced the amount it eventually paid in legal settlements related to mortgage activities. Indeed, moves from CEO Jamie Dimon to reduce the bank's exposure to subprime and derivative risk were instrumental in ensuring that JPMorgan wouldn't get hit nearly to the same extent as many of its peers in the banking industry. 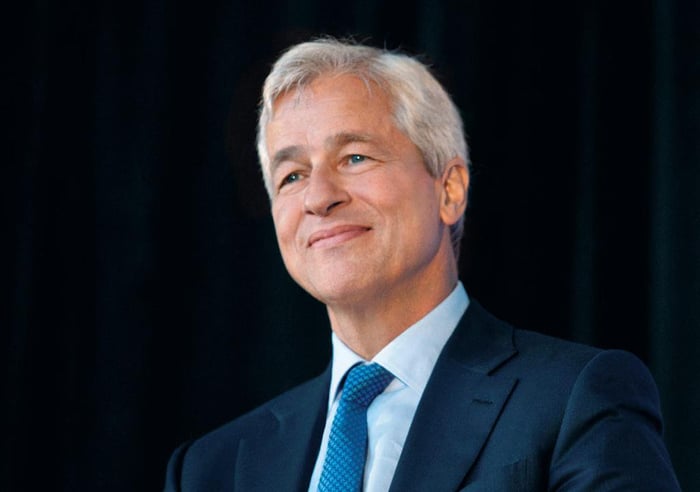 How JPMorgan boomed after the crisis

In large part because of its positioning, JPMorgan quickly recovered from the financial crisis and saw its stock jump to new highs. Assets that the bank purchased at rock-bottom prices during the recession in 2008 and following eventually regained their value, and that put JPMorgan on a trajectory to regain all of its lost ground just a few years later. Since then, all-time highs followed, and shares now trade at about four times their 2009 levels.

One reason why investors can be optimistic about JPMorgan's prospects is that its leadership has its interests closely aligned with those of the company. Dimon currently owns about $600 million in JPMorgan stock, and he also has options that give him the right to acquire more shares in the future. Given the amount of leverage that JPMorgan uses in its business model, Dimon's holdings are a vote of confidence in the bank's ability to weather any future cyclical pressure and still emerge stronger than ever. Moreover, given the fact that JPMorgan shares pay a substantial dividend, shareholders have benefited not only from share-price appreciation but also from healthy streams of income as well.

JPMorgan Chase has used smart business practices and its good reputation to drive its business growth. With conditions appearing likely to become more favorable for the banking industry in the future, investors can expect JPMorgan Chase stock to live up to its impressive history and provide more long-term gains for shareholders.