Not all toy stocks are created equal.

The global toy industry is largely dominated by three huge companies: United States-based Hasbro and Mattel (MAT -0.69%), and Denmark's Lego Group, which is privately held, so investors can't own a piece of the maker of those ubiquitous colorful little plastic construction blocks. Moreover, there are only three companies listed on major U.S. stock exchanges that are classified under the "toy and games" industry – JAKKS Pacific, as well as Hasbro and Mattel.

So, how does someone like me -- who believes investors should steer clear of longtime underperformer JAKKS and feels more cautious than playful when considering investing in Barbie maker Mattel, which is in the midst of a turnaround -- fulfill my mission of picking two or three best toy stocks? Think a bit out of the (toy) box.

Here are my choices for the two best toy stocks for 2017, as well as one hot, relatively new public company to keep an eye on:

Hasbro is more than just my favorite toy stock -- or more appropriately "toy and entertainment stock," as the company leverages its toy and game brands across various media. In December, I called the maker of such favorites as Nerf, Play-Doh, Monopoly, and Transformers the best consumer goods stock for 2017.

Perhaps because I'm weak for a good game or toy, the Pawtucket, R.I.-based toy maker didn't want me to lose (Pie) face. (Pie Face game is one of the company's newer hits.) Hasbro threw a Nerf for the stock equivalent of a winning touchdown and returned 29.1% in the first quarter, making it the No. 1-performing consumer goods stock on the S&P 500 out of a total of 65 stocks in the sector. Now, just three more quarters to go!

Investors, of course, should take a much longer approach to investing than one quarter. Hasbro stock delights on this front as well, returning 350% over the 10-year period, whipping the returns of its peers and the broader market, as the chart below shows. Long-term past performance doesn't guarantee future performance, but it does often reflect on a company's competitive advantages and its management's ability to capitalize on those advantages. 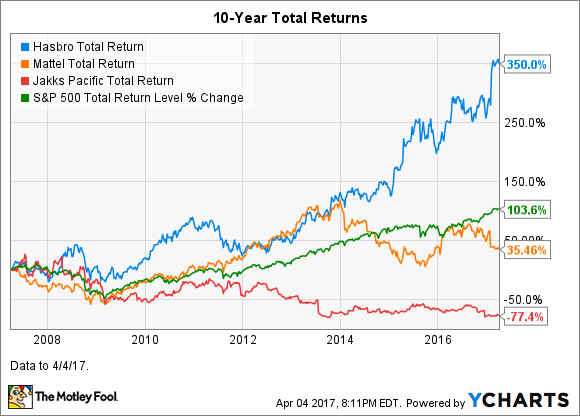 In addition to having arguably the strongest internal lineup of toys and games in the industry, Hasbro sports close ties to Disney, which should help to continue to power its financial performance and stock returns. Hasbro's license to produce toys based on Disney's Star Wars franchise has proven golden since the release of the megablockbuster The Force Awakens in December 2015. Sales of the company's Star Wars toys got another huge boost this past holiday season, thanks to the pre-holiday release of Rogue One. The good news is that there are several more Star Wars films slated for release over the next few years, led by The Last Jedi this December.

Moreover, Hasbro's ties with the House of Mouse tightened in 2016 when it was awarded the license to produce Disney Princess and Frozen dolls. This was quite a coup, as rival Mattel previously held this desirable license.

In 2016, Hasbro's year-over-year revenue increased 12.8% as reported and 14% in constant currency to $5.02 billion, earnings per share on the basis of generally accepted accounting principles (GAAP) jumped 21.6% to $4.34, and adjusted EPS soared 27.1% to $4.46. Wall Street analysts expect Hasbro's average annual EPS to grow at 5.3% over the next five years. Given that Hasbro blew by analysts' estimates in all four quarters of 2016 -- simply crushing them in two quarters -- it seems likely to me that analysts' future estimates will also prove too conservative.

Disney gets a cut of revenue its toy licensees generate based on its intellectual property, such as its Star Wars franchise. Image source: Hasbro.

Disney doesn't make toys, though it does earn a cut of the revenue generated by its toy licensees from sales of toys based on its immense collection of popular characters and other intellectual property (IP).

The entertainment giant, of course, isn't a pure play on toys because its empire is vast. In addition to its consumer products and interactive media segment -- which licenses Disney's IP for use on countless products besides toys -- the company's businesses include its iconic movie production studios, its broadcast and cable TV properties, and its magical theme parks and resorts.

In fiscal 2016, revenue from Disney's consumer products business accounted for 9.9% of the company's total revenue and -- thanks to the segment's higher-than-company-average operating margin -- an outsized 12.5% of total segment operating income. In fact, as it traditonally does, this business had the highest operating margin (35.5%) out of all four segments -- yes, even higher than Disney's lucrative media networks business.

Investors should know that Disney's top management expects fiscal 2017 to be a slower-growth year, but anticipates that fiscal 2018 will bring a return to the company's recent robust growth dynamics. 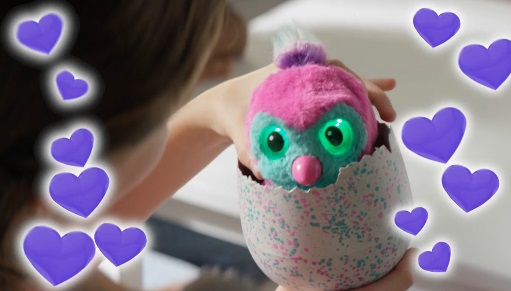 Toronto-based Spin Master, which was founded in 1994, might be a new name to many investors, but it was hard not to at least hear about Hatchimals last holiday season.

A Cabbage Patch-like mania surrounded the launch of the interactive robotic toys that hatch themselves from an egg into various colorful fuzzy creatures that sing and play. The toy maker couldn't keep up with demand for the megahit toy, which racked up a slew of honors, including being named an "Innovative Toy of the Year" at 2016's North American Toy Fair.  There was also some ruckus when a fair number of them reportedly failed to hatch.

While Hatchimals is surely Spin Master's biggest hit toy to date, the company is no one-hit wonder. Its other popular toys include Air Hogs, Meccano robots, and PAW Patrol toys. It's also enjoyed considerable success producing animated TV series, including current hit PAW Patrol, which is broadcast in many countries and has lit a fire under series-based toy sales.

Spin Master's stock went public on the Toronto Stock Exchange in July 2015. It also trades over-the-counter (OTC) in the U.S. (Investors should use considerable caution when considering buying this stock OTC, as the trading volume is extremely low, which means that the stock could be very volatile.) Moreover, while the company's performance looks promising, it's still relatively newly public and playing in a field with several well-established, much larger companies.

Hasbro is the best bet for most investors looking for a toy stock. Disney is a wonderful stock for investors interested in an entertainment company that has good exposure to toys. More risk-averse investors might consider keeping an eye on our Canadian relative newcomer to the public markets.