Please ensure Javascript is enabled for purposes of website accessibility
Log In Help Join The Motley Fool
Free Article Join Over 1 Million Premium Members And Get More In-Depth Stock Guidance and Research
By Daniel B. Kline - Apr 7, 2017 at 5:12PM

The company continues to see sales move in the wrong direction.

Macy's (M 9.91%) shareholders need some good news, and they didn't get it in late February when the company reported fourth-quarter and full-year results. That was expected, but it was still enough to send the struggling retail chain's stock steadily downward.

These were not shocking losses, but they continue to tell the story of a company in decline. That was more than enough to send shares trending downward from the reporting date of Feb. 21 through March (although they did bounce back a little toward the end of the month, as you can see below). After opening March at $33.48, shares closed the month at $29.64, an 11% drop, according to data provided by S&P Global Market Intelligence: 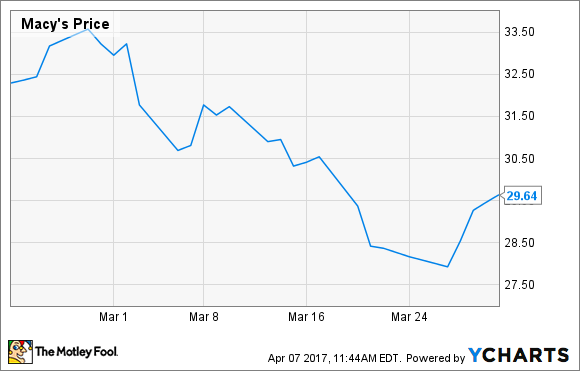 Despite the chain's ongoing problems, Macy's CEO Terry J. Lundgren keeps putting on a brave face. In the Q4 earnings release, he explained why, despite the sales declines, things are actually moving in the right direction:

While 2016 was not the year we expected, we made significant progress on key initiatives that are starting to bear fruit. These include continued improvement in our digital platforms, the rollout of our new approach to fine jewelry and women's shoes, an increase in exclusive merchandise and the refinement of our clearance and off-price strategy.

The CEO also noted that the chain has made progress "rightsizing" its store portfolio and changing its management structure.

Macy's has been shrinking its store count. Image source: Macy's.

Macy's is essentially in "put up or shut up" mode. The company says it's on track, but it needs to show investors that there is a bottom to its sales slide.

The question is whether there remains a place for a traditional department store in the current retail world. Macy's problem may be that it had too many locations, and too little focus on digital. If it can prove that, then its share price will stabilize. Otherwise, this could be a story that starts to get very ugly, with an unhappy ending for everyone involved.