Please ensure Javascript is enabled for purposes of website accessibility
Log In Help Join The Motley Fool
Free Article Join Over 1 Million Premium Members And Get More In-Depth Stock Guidance and Research
By Brian Stoffel - Updated Jan 28, 2020 at 9:09AM

If you buy one, you actually own them both. Does that make Berkshire a better buy?

It seems almost sacrilegious to make such a comparison. Coca-Cola (KO -0.31%) is one of Warren Buffett's longest and most popular investments. Indeed, if you own shares of Buffett's Berkshire Hathaway (BRK.B 0.64%), you are indirectly buying a piece of the world's most popular soda.

But today, we'll be seeing which company is more worthy of your investment dollars. 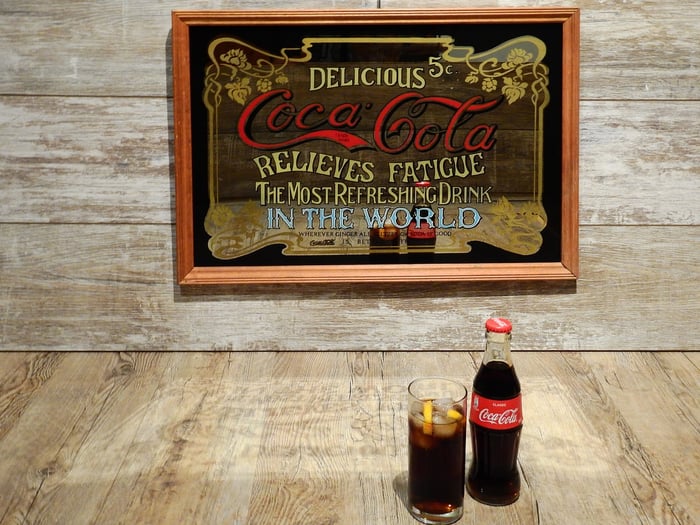 Of course, that's not a question that can be answered with 100% certainty -- as the future is completely unknowable. That being said, there are a few lenses through which we can approach the question that give us the ability to better decide for ourselves. Here's how these two stack up.

I won't beat around the bush: a company's sustainable competitive advantage -- often referred to as a "moat" -- is the single most important thing for an investor to research. A moat is that special something that keeps customers coming back year after year, paying incrementally more each time, while holding the competition at bay.

Coke's primary moat comes from the power of its brand. In fact, it is one of the most recognizable brands in the world. Interbrand ranks Coke as the third most powerful brand in the world, worth an estimated $73 billion.

At the same time, the health concerns regarding the company's eponymous drink have also caused sales in North America to slip over the last few years. While the company does own a number of other non-soda brands -- Dasani, Powerade, and Honest Tea, to name a few -- there's no denying that soda-drinking is waning.

Berkshire Hathaway, on the other hand, has so many businesses that it's tough to decipher all of the moats. The company's insurance wing benefits from somewhat high switching costs and some very powerful brands -- namely, GEICO. The railroad, energy, and utilities section of Berkshire benefits from high barriers to entry -- via both regulatory approval and sky-high infrastructure costs.

There are a host of other well-known names in Berkshire's portfolio -- Duracell batteries, Pampered Chef, and Dairy Queen are some examples. The bottom line is that while Coke certainly has a powerful brand, Berkshire has such a strong diversity of moats, it's tough to beat.

While investors usually love to see cash being returned to them in the form of dividend payments or share repurchases, it's vitally important for a company to have a sizable cash stash on hand. That's because every company -- at one point or another -- will have to face difficult economic times.

Companies with cash on hand have options. They can buy back even more stock, make acquisitions on the cheap, or -- most importantly -- outspend rivals to gain market share. Debt-heavy companies are in the opposite boat, made fragile by their tenuous economic situation.

Here's how Coke and Berkshire Hathaway stack up in terms of financial fortitude, keeping in mind that Berkshire is valued at over twice the size of Coke.

But in this realm, it's difficult to beat Berkshire Hathaway. Indeed, one of the company's greatest strengths is its balance sheet. During the Great Recession, many big-name companies called upon Berkshire to lend them money in a pinch. Because of its enormous cash stash, Buffett could do that -- and extract a large sum for doing so.

In this realm, things appear to be a lot closer. On an earnings and free-cash-flow basis, Coke and Berkshire look relatively closely valued. Income investors might not be happy with Berkshire's lack of a payout, but they should also be aware that Coke has used 93% of its free cash flow to pay its hefty dividend over the past 12 months -- flirting closely with being unsustainable.

In the end, I'm going to call this one a wash, as neither is demonstrably cheaper than the other.

So, there you have it, Berkshire Hathaway is the runaway winner. The company's moat -- provided by a bevy of valuable brands, stable businesses, and high barriers to entry -- bests one of the strongest brands in the world. And Berkshire's financial fortitude is difficult to match outside of some well-known technology companies.

While investors might fret about Berkshire's lack of a dividend payment, I still think it's worthy of consideration as an investment.