One of the primary goals of any investor should be to beat the returns of the broader market -- a challenging task considering the S&P 500's historical annual average return of around 10%. But achieving that goal doesn't mean you need to buy risky stocks that leave you stressed out and losing sleep.

So where, exactly, can you find great stocks that have the potential to not only beat the market, but also let you sleep at night? I think shares of Markel (NYSE:MKL), Disney (NYSE:DIS), and Activision Blizzard (NASDAQ:ATVI) fit the bill nicely. Read on to learn why. 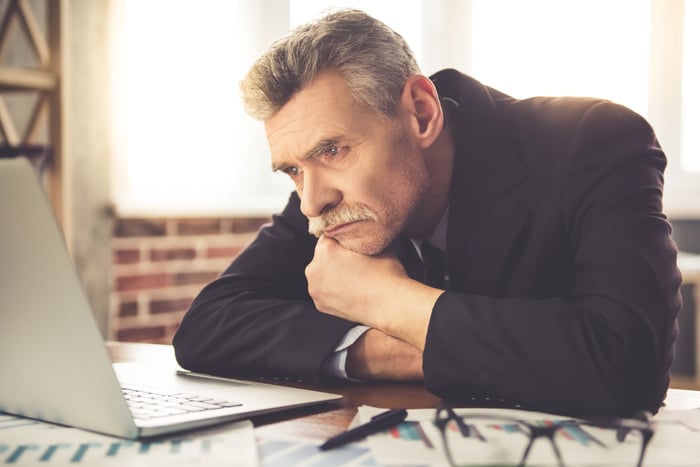 Don't let your investments make you feel like this. IMAGE SOURCE: GETTY IMAGES

First consider Markel, a specialty insurance and financial holding company -- and one of my all-time favorite stocks. Markel is similar to Warren Buffett's Berkshire Hathaway (NYSE:BRK.B)(NYSE:BRK.A) in that its revenue and earnings streams are threefold: insurance operations, investment operations, and a diversified group of non-insurance businesses operating under the Markel Ventures moniker.

For investors looking for relative stability, Markel tends to repeatedly deliver solid but decidedly unexciting quarterly results; in the fourth quarter of 2016, all three segments delivered admirable performances. Markel's consolidated insurance underwriting combined ratio was 89%, meaning it earned $11 for every $100 in premiums it wrote. Net investment income climbed 13.4% year over year, $93.8 million, while net unrealized gains on investments were $1.7 billion, up from $1.5 billion at the end of 2015. Markel Ventures saw quarterly operating revenue rise 29%, to $348.1 million.

And don't let Markel's seemingly high share price scare you. Though the stock closed Friday at just over $974 per share, Markel increased its book value per share last year by 8%, to $606.30, leaving shares trading at 1.6 times book value. That's slightly above its average range for the past few years, but still a reasonable premium to pay for such a high-quality business.

That also brought Markel's compound annual growth in book value per share over the past five years to 11%. Considering management's bonus compensation structure is primarily tied to the latter figure, this ensures that management's interests are firmly aligned with those of Markel investors.

A stock the whole family can love

Disney is arguably the world's most successful entertainment conglomerate. But Disney has grown into so much more than its namesake TV channels, theme parks, and movie studios. Thanks to several smart acquisitions over the past decade or so, Disney is also the proud parent company of Pixar, purchased for $7.4 billion in 2006;  Marvel Entertainment, acquired for $4 billion in 2009; and Lucasfilm, bought for just over $4 billion in 2012.

Of course, most of us have seen the early fruits of those acquisitions on the big screen already. Then there are the trickle-down effects of Disney's studio success into its parks and resorts segment, consumer products and interactive media businesses, and content for its media networks segment. That's not to mention Disney's 80% ownership stake in ESPN, full ownership of ABC, and 50% stake in A&E Networks. Disney also paid $1 billion last year for a 33% stake in BAMTech -- an entity that holds the streaming-technology and content-delivery businesses of Major League Baseball -- with a goal of creating its own direct-to-consumer ESPN-branded video-streaming service.

That goes to show Disney is working hard to evolve along with consumers' changing media consumption habits, especially as it pertains to the effect of cord cutters on its core media networks business. Coupled with Disney's practice of returning at least 20% of all cash generated by the company to shareholders in the form of dividends and share repurchases, I think any investor can sleep tight letting Disney work its magic on a portfolio.

Sleep well by "gaming" the market

Last but not least, take a look at Activision Blizzard (NASDAQ:ATVI). In addition to its own two-year, $1 billion stock-repurchase program approved last quarter, Activision pays a modest 0.6% dividend. But investors in the video-game juggernaut have cheered an impressive 44% gain for the stock over the past year, most recently helped by Activision's stellar fourth-quarter 2016 results released in February.

Activision also took a big leap into the more novel world of free-to-play games with its $5.9 billion acquisition of Candy Crush maker King Digital just over a year ago. King, for its part, has maintained two of the world's top 10 highest-growing titles in U.S. mobile app stores for 13 consecutive quarters.

Finally, Activision Blizzard is working to capture incremental revenue from the integration of in-game advertising, the rising influence of e-sports, and its own consumer products initiatives. Here again, investors can rest easily knowing they own part of an industry leader that isn't afraid to adapt to survive and thrive in today's fast-changing world.