Zoe's Kitchen's (ZOES) fourth-quarter earnings report didn't contain a lot of good news for investors, with comparable-restaurant sales growth slowing to a crawl, and meager guidance of just 1% to 2% comps growth for 2017. The stock has since dropped more than 20%, now trading near its all-time lows.

However, management's plans for 2017, as discussed during its conference call with analysts, include three areas of focus that could help as Zoe's tries to turn things around. 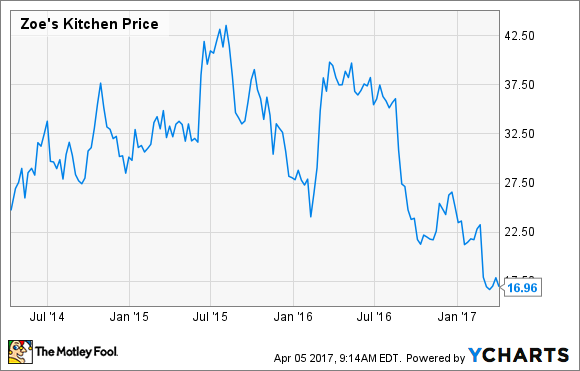 1. Menu and marketing innovation on tap

Though the traffic slowdowns the company experienced in the back half of 2016 aren't unique to Zoe's, it's clear management needs to find ways to bring more customers in the door if it expects comps, which notched a mere 0.7% increase in the fourth quarter, to rebound.

One way the company plans to do that is by introducing new menu items that will be rolled out during the back half of 2017. To prepare its kitchens for this, during the first half of the year, Zoe's will be simplifying some of its ingredient preparation to help keep labor costs for its new menu items in check. The company says these changes should allow it to build a "stronger pipeline of culinary innovation to fuel our future growth."

The company also plans to draw more customers to its restaurants with better marketing. Specifically, Zoe's says it will be moving dollars from brand-building toward efforts that directly drive sales and traffic. It also plans to build out its own customer relationship management (CRM) capabilities in 2017, allowing it to create and manage loyalty programs in-house.

Speaking to the benefits of this new marketing emphasis, CEO Kevin Miles stated on the conference call (transcription by Thomson Reuters), "In addition, we will increase spending as we develop and refine new customer acquisition strategies and reactivation strategies for lapsed customers. Over the next year, we believe our marketing will become more targeted, more measurable and more data-driven."

2. Full speed ahead with delivery

In an Uber Eats world, where even McDonald's can be delivered to your door, convenience has become a more important factor than ever in the restaurant business. So Zoe's management is making its own push into delivery, betting that this new option will help boost the top line for years to come.

In 2016, Zoe's tested delivery service in roughly 30 stores. The results were promising enough that Zoe's will be rolling out delivery to around 100 of its stores -- about half of its store base -- in the first quarter of 2017. Along with an improved app and web platform, Zoe's believes these efforts will help it capture more of the consumer food dollars already flowing toward delivery options.

Management says it is not currently factoring any benefit from delivery into its current outlook for comps growth, which means that, if successful, Zoe's delivery push could help lift those numbers higher as 2017 rolls on.

With comps growth greatly reduced -- at least for now -- from Zoe's historical averages, most of the company's revenue growth will come from opening new stores.

The company added 38 restaurants in 2016, growing its store base by 23%. And in 2017, Zoe's plans to open 38 to 40 restaurants, which at the midpoint reflects about 19% annual growth. Longer-term, the company is targeting 400 total restaurants by the end of 2020, about twice as many as it had at the end of 2016. If the company can follow through on these plans, a rapidly increasing store count will provide healthy top-line growth in spite of any shorter-term comps slowdown.

As far as whether it's wise to continue expanding so quickly in the face of decelerating comps, Miles said, "[W]e're not seeing anything in our openings that tell us that we shouldn't open or we should slow that down."

On the call, management was forthcoming about the challenges it faces, noting that restaurant contribution margin rates in 2017 will likely be lower as the company continues to open new stores, which are not as profitable as mature stores. Over time, however, this pressure should ease as Zoe's mature stores, which average higher sales and margins, begin to make up a higher percentage of its restaurant base.

The company also stated it plans to take on debt this year to continue its intended pace of store openings. With an existing $50 million line of credit available and expected capital expenditures of $38 million to $40 million in 2017, this doesn't appear to be a cause for concern.

Having lowered guidance on two separate occasions last year, the company's 2017 guidance will hopefully prove to be more realistic: Comps growth of 1% to 2%, revenue of $325 million to $327 million, and restaurant contribution margins of 19% to 19.3%. For context, in 2016, the company posted comps growth of 4%, revenue of $276 million, and restaurant contribution margins of 20%.

The first half of 2017 may make for fairly challenging year-over-year comparisons, given that the company enjoyed healthy comps increases during the first two quarters of 2016. However, during the second half of the year, shareholders should look to see whether Zoe's new menu, marketing, and delivery initiatives can help provide the revenue boost the company needs to get back on track.