Edmunds has some potentially terrible news for the nascent market for electric vehicles. In a new report (link opens a PDF), industry analysts at the automotive researcher predict that the upcoming expiration of federal tax incentives could utterly destroy the EV market. In no uncertain terms, Edmunds predicts, "Without these credits, this market is likely to crash." Ouch.

The underlying rationale for that grim assessment is a case studio of the EV market in Georgia, which looks at how EV sales fared before and after the state's EV tax credit ($5,000) expired a couple of years ago. As a product category, EVs saw their market share decimated after the state tax credit expired. Georgia's share of U.S. EVs fell from 17% to just 2% following the expiration. Extrapolating the impacts, Edmunds concludes that we may see the same play out on the national level once the federal credit expires. President Trump is a notorious climate denier and champion of coal, but the idea of eliminating the credits prematurely is probably more trouble than it's worth. What's more likely is that Donald Trump and a Republican Congress simply won't renew them.

As the dominant domestic player in EVs, should Tesla (TSLA -0.06%) be scared?

The Leaf does not speak for everyone

Naturally, Tesla is included in the Georgia market. Just as expected is that Tesla's unit sales comprise a small minority, given high price points and premium positioning. There's another vehicle that effectively dominated the market though: the Nissan Leaf. It's not an exaggeration to say that the Georgia EV market more or less lived or died by the Leaf. Citing IHS Markit, Edmunds points out that the Tesla Model S saw a more minor dip following the credit's expiration, and then rebounded "within a few months." The Leaf did not recover. 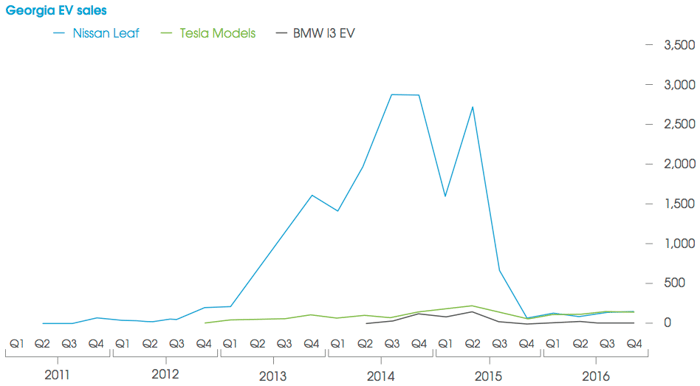 Here's the thing: The underlying data of the report speaks primarily of the Leaf. The Leaf has been declining in both relevance and competitiveness as a product for a few years now. Nissan was certainly a first mover in EVs, but the company didn't continue investing aggressively to improve things such as range or battery degradation. The DC fast-charging standard that Nissan championed, CHAdeMO, is also in decline. There's an entirely new breed of EVs on the horizon, including the Model 3, that can offer twice the range of the Leaf at almost the same price point. General Motors' Chevy Bolt is here; GM has already sold roughly 3,600 units in the U.S. since launching last year, and the geographical rollout is ongoing.

The Bolt and Model 3 are arguably the first mainstream, affordable EVs that can offer 200 miles of range or more, a key psychological threshold for consumers to alleviate range anxiety. Extrapolating the Leaf's declining performance, some of which is undoubtedly attributable to the credit expiration in Georgia, to other superior EVs nationwide is a tenuous argument.

Edmunds points to the historical underperformance of EVs too, citing President Obama's famous prediction that there would be 1 million EVs in the U.S. by 2015. The market fell far short of this target for a number of reasons, but consider that Tesla currently has about 400,000 Model 3 reservations in hand -- singlehandedly representing 40% of Obama's target from 2011.

Some of these Model 3 buyers will receive the federal tax credit; Tesla is expected to hit the 200,000 threshold that triggers the phase-out in early 2018. But a meaningful percentage of these customers should have no illusions of receiving the credit; it's unclear how many are actually basing their purchasing decision on the credit and whether the credit is a deal breaker for them.

Even without the credit, the average sales price of a car in the U.S. is right around $35,000, so it's not unreasonable to price a compelling EV at that price point with no additional incentives. Tesla's reservation tally for the Model 3 shows beyond a doubt that there is meaningful demand for the right EV at the right price and could very well pick up where the Leaf left off in carrying the EV market. Demand is not the issue here; the biggest challenge for the time being will be ramping up manufacturing to satisfy that demand.