Please ensure Javascript is enabled for purposes of website accessibility
Log In Help Join The Motley Fool
Free Article
Join Nearly 1 Million Premium Members And Get More In-Depth Stock Guidance and Research
By Daniel B. Kline – Updated Apr 10, 2017 at 9:47AM

Costco may have taken the overall title in its category, but it did not receive top marks in all criteria in this survey.

Costco (COST 0.12%) has retaken the top spot among grocery stores and big-box retailers in an annual Market Force Information survey of Americans' favorite places to get gas. The warehouse club had fallen behind BJ's in 2016 after coming in first in 2015 by a large margin, according to Market Force. In 2017, Costco took back the No. 1 spot while Wal-Mart's (WMT -0.68%) Sam's Club came in second, BJ's dropped to a tie for third with Kroger, Wal-Mart itself took fourth, and Safeway came in fifth.

Over 11,000 consumers took part in the annual survey that ranks gas stations in two categories: (1)
traditional gas stations and convenience stores and (2) grocery stores and big-box retailers with gas pumps. Returning to No. 1 in its category was good news for Costco, but not everything Market Force found was positive for the warehouse club chain. 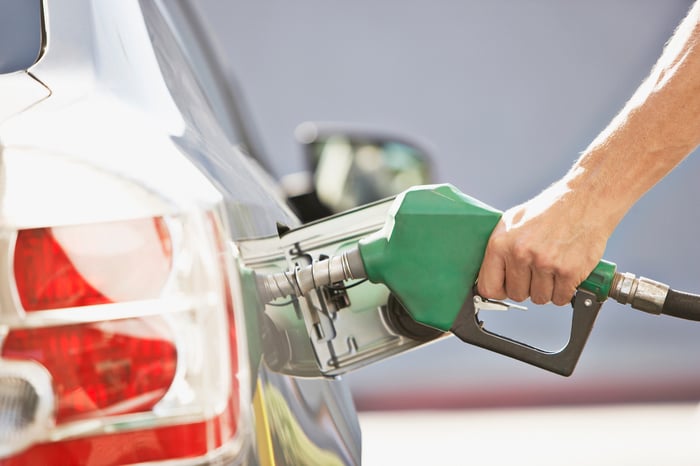 Price is important, but it's not the only factor when it comes to people deciding where to fill up. Image source: Getty Images.

While Costco tops the grocery and big-box category, people still prefer to buy their gas at conventional stations, even though their prices tend to be higher (especially when you factor in loyalty rewards), according to Market Force. "For their most recent trip to the pump, 71% of drivers visited a gas station compared to 29% who visited a grocer, warehouse club or big-box retailer," according to Market Force. "Other key influencers in choosing a fueling stop are good lighting, fuel quality and payment options."

What are consumers looking for?

While 77% of consumers ranked price as the most important factor when it comes to picking a place to fill up, that was not the only issue that concerned them. Security, fuel quality, easy ways to pay, and ease of entry/exit, were all named as contributing factors to making their gas station choice by over 40% of the 11,000 people surveyed.

Costco may have taken the overall title in its category, but it did not receive top marks in all criteria. Market Force noted that the warehouse club chain "led in most them," but tied with Safeway for last in ease of getting in and out and was alone at the bottom when it came to cleaning supply availability, a category that was considered important by less than 6% of those surveyed.

Second place Sam's club scored top marks in ease of getting in and out, tied with its sister brand Wal-Mart, while the warehouse club chain ranked second on its own to Costco for fuel quality, price, pump speed, and appearance. Grocery and big-box chains had low overall marks when it came to speed of payment authorization, probably due to the extra time needed to process loyalty cards, according to Market Force.

While Costco members may be joining the club in part because of its gas stations, fill-up stops do not generally lead to added visits to the actual stores, according to this data. "Only 19% said they made an additional retail purchase when they last filled up at a grocer or big-box store, and, of those, most purchased from BJ's," wrote Market Force.

However, cheaper gas clearly drives customer loyalty, especially when already low prices are enhanced with cash back from rewards credit cards or programs like Costco's Executive Membership, which offers 2% back on purchases up to $750 back a year.

To hold onto its top rating, Costco may have to address the ease of getting into and out of its gas stations. That may be a challenge for existing locations since the warehouse club generally offers one-way traffic at its stations, which are often inside its parking lots rather than directly off the street.

Still, this is a win for Costco, which has clearly overcome its shortcoming by offering low prices, and easy-to-use (if not easy to enter and exit) stations. Going forward, that should remain a reason consumers join or renew their memberships with the warehouse club.

Why Costco Is an Underrated Dividend Stock
413%