The House of Mouse is building billion-dollar franchises out of its Marvel, Pixar, and Lucasfilm buyouts -- and the Disney brand itself is nothing to sneeze at, either. 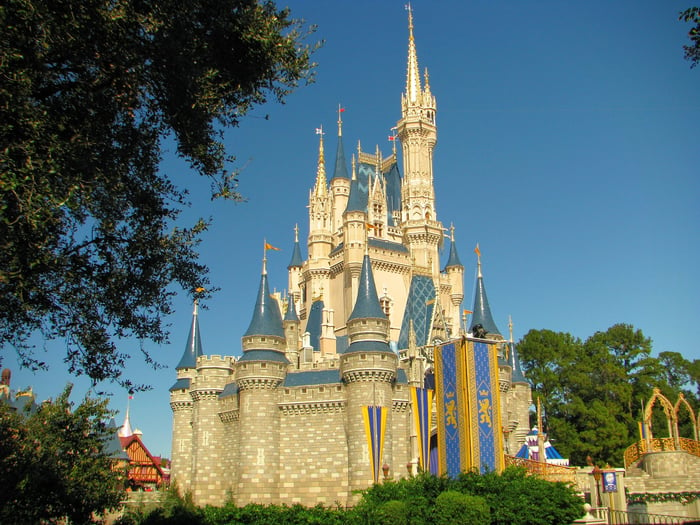 Walt Disney (DIS -0.15%) casts a large shadow over the movie industry. Four of the 10 highest-grossing movies of all time come from the House of Mouse, according to data from Box Office Mojo. The studio owns the market for children's movies outright, including the entire top 10 of domestic G-rated titles.

Here's a quick look at Disney's 10 biggest successes at the American box office -- with a couple of irresistible honorable mentions. 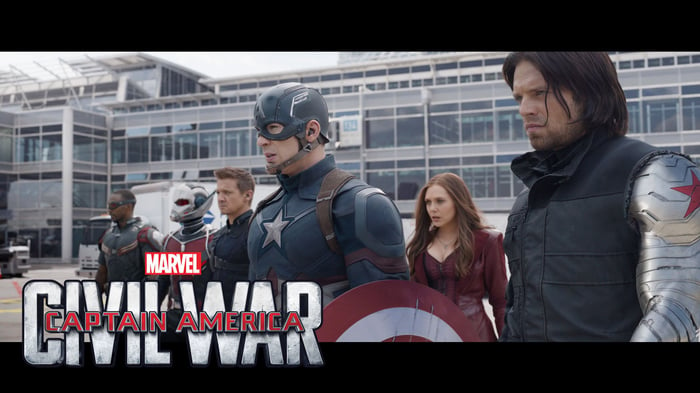 The Marvel Cinematic Universe is the top-grossing movie franchise of all time, and you'll see several more titles from that 14-movie series before we're done, here. This one collected $408 million at the domestic box office.

The 13th MCU film and third Captain America feature could also be thought of as a full Avengers showdown. It features almost the entire superhero crew, taking sides with Iron Man or the Captain in a battle of ideologies. Civil War also sets the stage for next year's Avengers: Infinity War and adds Spider-Man to the franchise. 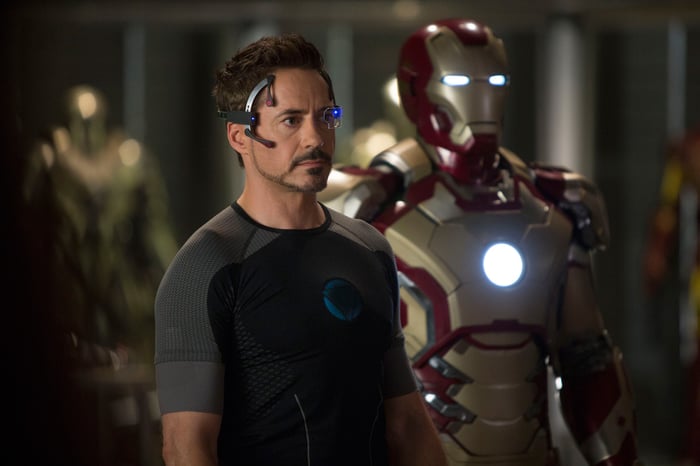 Another piece of the MCU, Iron Man 3, scored $409 million at the domestic ticker till.

This was a more focused story, sticking to characters from Iron Man's corner of Marvel's comic-book world. It played very well to overseas audiences, punching above its global box office weight with a $1.21 billion worldwide take. If this were a global list instead of a domestic one, Iron Man 3 would have been Disney's fifth-biggest hit. 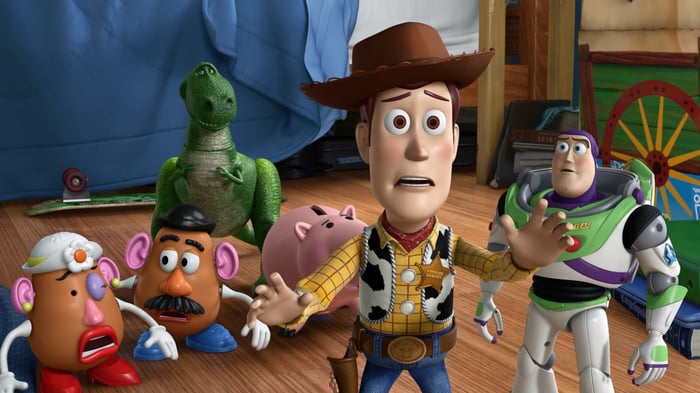 The third title in Pixar's Toy Story saga collected $415 million domestically. It has a sizable lead on parts one and two of this classic trilogy, though the differences nearly disappear if you adjust ticket prices for inflation. Toy Story and Toy Story 3 were released 15 years apart, and decades make a difference.

The adventures of Buzz Lightyear, Woody, and Andy have become the stuff of legend. Toy Story is firmly embedded in popular culture, and it has inspired lots of theme park rides, video games, spinoff TV series, and more. The first film proved that computer animation can compete with traditional animated films, turning the market for children's movies on its head. Toy Story 3 tapped into that legacy and continued to build on it. 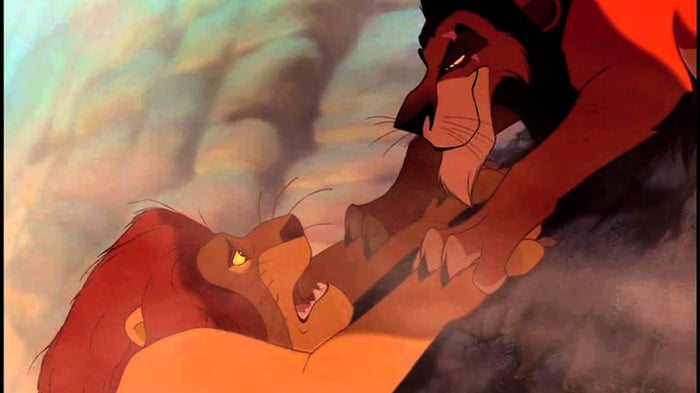 The most profitable title from the so-called Disney Renaissance era showed a domestic box office total of $423 million. This was done in the early days of multiplex theaters, showing on roughly 40% fewer screens than the more modern titles that make up the rest of this list.

A formidable example of Disney's animated musicals, Lion King collected two music-related Academy Awards as "Circle of Life," "Can You Feel the Love Tonight," and "Hakuna Matata" entered the American imagination. It's the highest-grossing G-rated movie of all time, it holds the inflation-adjusted record for revenue per theater, and it's the top grosser of 1994, 27% ahead of Forrest Gump.

Lion King sits at the very heart of Disney's classic content portfolio and has also inspired countless spinoffs, theme park rides, and even a Broadway musical with six Tony Awards to its name. 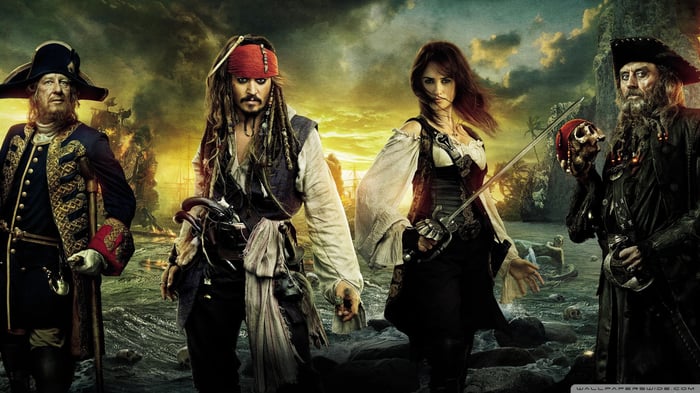 The second installment of the Pirates franchise scored $423 million in domestic ticket sales and $1.1 billion worldwide.

Other movies have spawned theme park rides. This series went the other way around, being based on a ride of the same name at several Disney parks around the world. The movies feature many characters and story elements taken directly from the Disneyland and Magic Kingdom attractions, and the company has also infused new material from the films into the rides. It's a great example of Disney exploiting its biggest wins to the hilt in order to draw more foot traffic to both theaters and theme parks.

Dead Man's Chest was Disney's biggest box office hit for a long time, holding that record for six years before a 2012 title higher up on this list surpassed it. A fifth part of this swashbuckling franchise will raise the curtain on May 26, 2017, once again starring Johnny Depp as Captain Jack Sparrow. 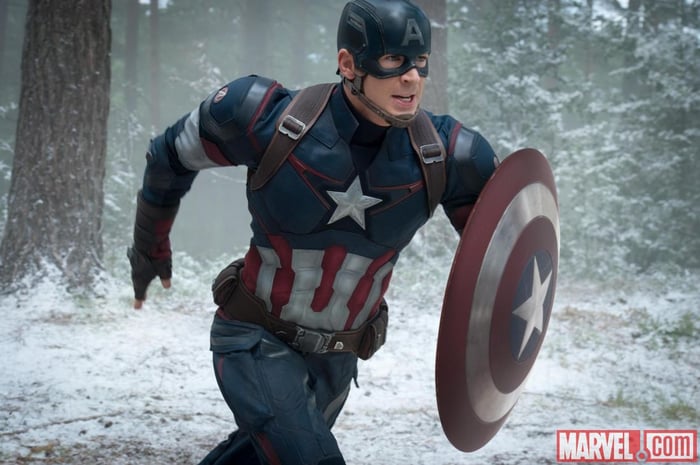 We're back in the Marvel Cinematic Universe, where the Avengers teamed up to create and then destroy a robotic villain. In the process, they brought in $459 million at the box office, or $1.4 billion on a global level. 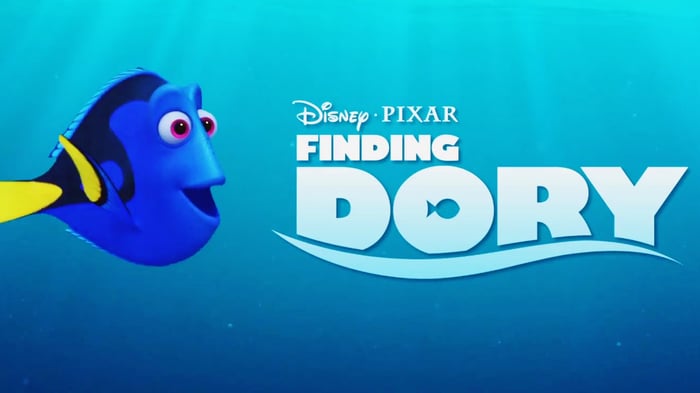 The top-grossing Pixar title in this rundown was a sequel to 2003 hit Finding Nemo. When Nemo was rereleased in 3D as a 10-year anniversary event, director Andrew Stanton watched it again and found inspiration for a sequel based on the forgetful fish voiced by Ellen DeGeneres. Three years later, Dory crushed the box office with a $486 million tally that swelled to $1.0 billion globally.

Stanton had resisted calls for a sequel for years, because he never wanted to spit out another title for easy money. The focus on Dory provided the strong heart and plot he had been looking for, and audiences embraced the resulting film in a big way. Come up with a great story first, and the money will follow. That's how Disney operates at its best. 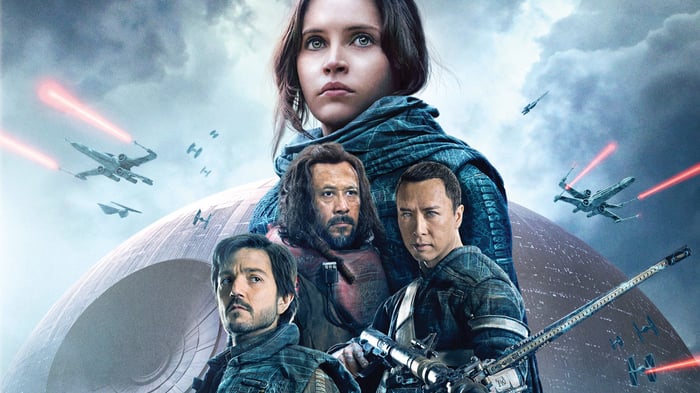 Image source: Disney via Starwars.com. And Starwars.com is, of course, an official Disney site.

The newest title on our list, Rogue One, tapped a global Star Wars fan base for $532 billion just in domestic ticket sales, and a global total of $1.1 billion.

This is technically not an installment in the core Star Wars saga, though Rogue One does tell the tale of events leading up to 1977's A New Hope. The main story's cast is largely absent, apart from a handful of cameo appearances, but audiences still showed up in astounding numbers.

That's a good omen for Disney's plans to create many more non-core stories in the Star Wars universe, focusing on events or characters from the main plot but in a more tangential way. Rogue One's success is a testament to the draw of the Star Wars franchise, which Disney will take advantage of for years to come. 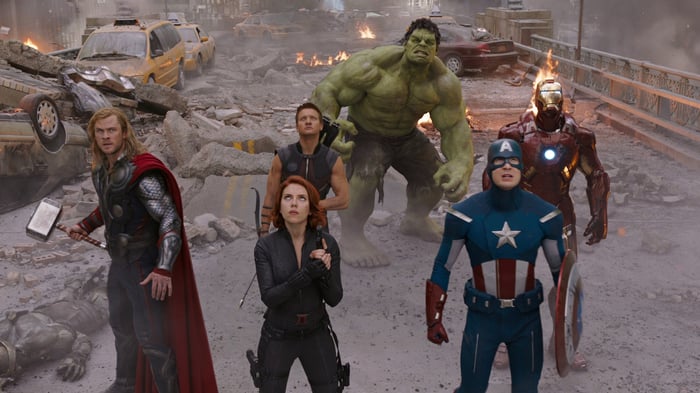 The first gathering of Earth's mightiest heroes jumped ahead of Dead Man's Chest with a $623 million domestic box office performance and $1.5 billion worldwide.

Marvel had been building toward this moment since 2005, when the then-independent company entered an ambitious financing program to fuel its cinematic plans for the next decade. That audacious move provided the foundation for the whole MCU, sparked Disney's $4.2 billion buyout bid in 2009, and created the Marvel we know today. Disney has allowed the Marvel division to stick to its guns, delivering one MCU hit after another. The Avengers franchise is the MCU's crown jewel and a crucial part of Disney's long-term business plans. 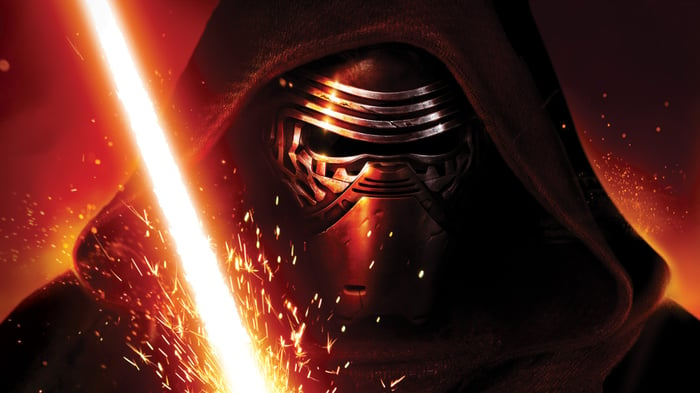 But nothing beats the first new Star Wars title in 10 years, and arguably the first good one since 1983. It gathered $937 million in domestic sales and another $1.1 billion abroad for a grand total of $2.1 billion worldwide. The Force Awakens holds all-time records in many categories, including all-time domestic sales, the top opening week, and highest sales per theater in wide release.

Decades of pent-up demand met strong reviews, and a supernova of cash generation followed. If Rogue One was a strong showing for the Star Wars universe at large, the dominance of The Force Awakens shows the full power of the Star Wars brand. In case you wondered whether Lucasfilm could ever earn its $4.7 billion buyout price, here's the resounding "yes" you were looking for.

Though Frozen fell short of Disney's all-time top 10 domestically, it would have been No. 4 on a worldwide list with a $1.3 billion global box office take.

This sleeper hit reached back to the Disney Renaissance model and came back with fantastic songs, a strong story full of unexpected plot twists, and a backstory dreamed up by H.C. Andersen in 1845. Sister princesses Elsa and Anna jumped right into the cultural conscience, led by Idina Menzel's rendition of the musical centerpiece, "Let It Go."

Now there's a Frozen-themed ride at Disney World's Epcot park, a Broadway musical is in the works, and I'm sure you haven't been able to avoid Elsa and Anna's likenesses on lunch boxes, pajamas, and Halloween outfits. Frozen-branded consumer goods have become a big and dependable revenue stream for Disney and its partners, and of course, there's a sequel under development.

The one that started it all, at least in cinematic terms, stopped at a $185 million box office total way back in 1937. Eight decades of inflation adjustments would make that equal to $942 million today, making it Disney's largest ticket-sales hit in adjusted terms. Yes, that's ahead of The Force Awakens, The Avengers, and The Lion King. The original Star Wars title beats the apple-cursed princess, of course, but that was way before Disney's time as steward of the Lucasfilm catalog.

Just like Frozen hearkens back to the Disney Renaissance era, the Renaissance itself was a return to the story-quality focus of the company's early days. Disney's management has not always stayed true to that ideal, but the company simply works better when the story focus returns.

These days, titles like Rogue One, Frozen, Captain America: Civil War, and Finding Dory are met with both critical acclaim and fantastic sales. I think it's safe to say that Disney is on the right track.