Even though Star Wars Episode VII: The Force Awakens has become one of the highest grossing movies in history, shares of Lucasfilm owner Disney (NYSE:DIS) have fallen nearly 20% over the past six months due to incessant concerns about cord cutters ruining its cable TV business. But as a long-term Disney shareholder, I went against the grain and added more shares to my position on the recent dip. Here are my top four reasons for doing so.

1. Cord-cutting fears are overblown
Most of Disney's decline was caused by concerns about ESPN and its other cable networks, which generated 31% of its revenue and 47% of its operating income last quarter. During that quarter, Disney's ESPN/ESPN2 subscribers fell from 95 million a year earlier to 92 million, while the Disney Channels, A&E TV Networks, and ABC Family posted similar declines. Those numbers fueled fears that Disney's most profitable business would succumb to cord cutters.

However, the bears overlook the fact that Disney's cable revenue and operating income respectively rose 12% and 30% annually during the same quarter, and international versions of those channels actually gained subscribers across the board. Moreover, Disney has repeatedly stated that ESPN should not be measured by subscriber numbers alone, but by the growth of its digital ecosystem across multiple platforms. Therefore, the bearish thesis on Disney oversimplifies the ESPN issue and glosses over the segment's positive revenue, operating income, and overseas growth.

2. Valuations and free cash flow
Disney stock wasn't cheap over the past year, and its trailing P/E hit a multi-year high of around 25 last summer. But its P/E ratio has since cooled down to 20, which matches the industry average for diversified entertainment companies. Disney's forward P/E of 16 also isn't expensive compared to its projected annual earnings growth rate of 12% for the next five years. 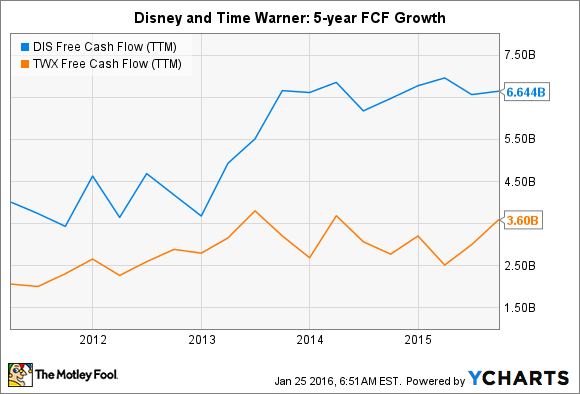 3. Unmatched ecosystem growth
Under CEO Bob Iger, Disney acquired Pixar, Marvel, and Lucasfilm -- which have now become the House of Mouse's three major pillars of growth. Disney maximizes the sales potential of each franchise by seamlessly expanding them in unified "universes" across its movies, TV shows, theme parks, toys, and video games.

Meanwhile, Comcast's (NASDAQ:CMCSA) NBCUniversal is clumsily trying to create an "Marvel-like" universe with classic Universal monsters like Dracula and the Mummy, which arguably lack the appeal of Iron Man or Captain America. Comcast also hasn't connected its media business to its theme parks as well as Disney. Instead, many of Universal Studios' biggest rides are based on licensed franchises like Harry Potter, Spider-Man, and the Transformers.

4. Big catalysts ahead
Looking ahead, Disney has already mapped out its Marvel and Star Wars film slates through 2019. In addition to Episode VIII (2017) and Episode IX (2019), Disney plans to launch spin-off films starring Han Solo and Boba Fett, which will further expand the Lucasfilm cinematic universe. Edwards Jones analyst Robin Diedrich estimates that it will take Disney just "two to three years" after Episode VII to recoup its $4 billion purchase of Lucasfilm.

Disney's Star Wars Land expansion of its California park, which could open in 2017, will leverage the strength of the Star Wars brand to boost attendance at its oldest park. Meanwhile, Shanghai Disney Resort, which will open this June, could act as a launchpad to open additional parks across China. These catalysts indicate that the weight of its theme park business -- which accounted for 32% of its revenue and 21% of its operating income last quarter -- should increase over the next few years.

Is it time to buy Disney?
Investing in Disney requires faith that its cable business can grow past its loss of domestic subscribers with international and digital expansion, that its film universes will cast a halo effect across its other businesses, and that new theme parks will generate solid returns. If you believe that Disney can achieve these three goals, as I do, then it might be the right time to buy a few more shares.